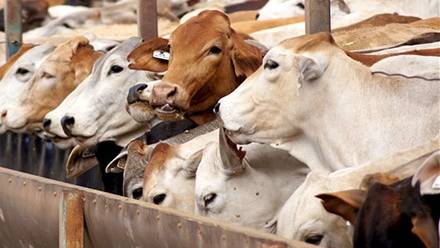 A drop in offers for live export steers out of Darwin of more than a dollar a kilogram has northern pastoralists very nervous given the backdrop of global discussion about the legitimacy of wet markets.

However, industry leaders have moved to allay fears Australia's main live cattle market, Indonesia, is on the verge of collapse and their view is backed by opinion from market analysts.

As mustering in the north starts to deliver larger volumes to market, northern suppliers said rates for live export steers have dropped from $3.80 a kilogram to well under $3 in the space of a week, with one shipment to Indonesia just filling at $2.60.

Talk of ships docked with no orders is rife, however industry body the Australian Livestock Exporters' Council said it has no knowledge that is occurring.

The coronavirus situation in Indonesia is at natural disaster level, with cases in every province, a death rate among the highest in the world and the collapse of the Indonesian currency.

ALEC chief executive officer Mark Harvey-Sutton said there was no doubt these were uncertain times but called for Australia's live-ex community to remain calm.

There were no mass cancellations of consignments and all indications were demand out of Indonesia continued to remain reasonable, while demand out of Vietnam was strong, he said.

"Market adjustment is occurring as a result of COVID-19. We've seen that in our own domestic market - there are real changes in where product is shifting to and Indonesia is no different," he said.

"A lot of our cattle end up in food service over there, so if restaurants are no longer running there will be a shift in the dynamic.

"But they still need to import protein and Australia is a cost-effective, reliable and attractive option so the trade still makes sense."

Some northern live export suppliers said they were now hanging on to cattle, rather than letting them go at such low rates, but there was a limit to how long they could take that option.

Numbers of northern cattle coming into southern Queensland saleyards were unlikely to be overflow from the live trade, given there was not a lot of Brahman content, agents said.

The volumes were also typical for this time of year.

Rabobank senior animal protein analyst Angus Gidley-Baird said while there were certainly big challenges in terms of ship logistics and quarantine, his organisation was not hearing of massive live-ex demand drops as a result of coronavirus.

He said price drops for northern cattle were typical for this time of year, due to supply increases as mustering starts and a traditionally quieter period in Indonesia.

"Indonesian feedlots typically fill up in December and January and there is a lag in demand until around May," he said.

"Caution on the Indonesian side would just as likely be related to high cattle prices in Australia as COVID-19.

"If Indonesia did shut down wet markets that would of course flow back up supply chains into feedlot demand quickly but we haven't heard any indication of that happening.

"So much of their product is bought through the wet market - it's effectively their retail front. Cancelling wet markets would be an enormous call."

Mr Harvey-Sutton said while there was a valid global discussion that needed to happen around wildlife wet markets, it was important food supply chains were not caught up in it.

There was no risk livestock sold into a wet market carried a coronavirus threat, he said.

"Wet markets are a legitimate part of the food supply chain. This is how the vast majority of consumers in Indonesia buy their fresh meat," he said.

Other analysts said the greater reliance on seaborne freight at the moment should further underpin demand for live export markets which offered a means to supply many large markets with fresh protein.