The north is being lashed with heavy rain as Cyclone Gretel gets set to form in the Coral Sea. 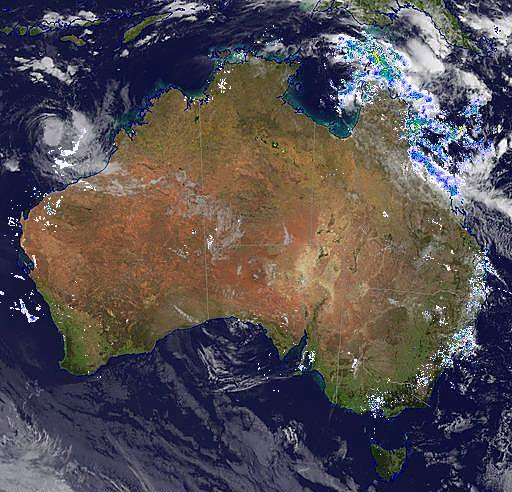 BoM satellite imagery shows plenty of activity in the north.

A TROPICAL low which is dumping heavy rain across North Queensland is expected to form into a cyclone after it reaches the Coral Sea.

There is a high chance that tropical Cyclone Gretel will form in the Coral Sea late on Friday or early Saturday, however it is expected to move away from the coast and not make landfall.

A low pressure system which formed in the Gulf of Carpentaria crossed the Cape York Peninsula on Wednesday, bringing widespread rain from the Cape down to Mackay.

In the 24 hours until 9am on Wednesday, Allingham on the Cassowary Coast received 339mm of rain, while Ingham recorded 264mm.

Bureau of Meteorology meteorologist Shane Kennedy said falls between 20mm-40mm were recorded across a broad area in the north, with many areas receiving between 50mm-100mm.

"It is pretty wet on the north east coast, with areas around Proserpine receiving 100mm-120mm, but by far the wettest sections were around Ingham.

"It was very wet in that pocket and it is likely to be the wettest area over the next couple of days."

Mr Kennedy said the tropical low was on the western coast of the Cape York Peninsula near Weipa late on Wednesday morning.

"It is expected to move over and emerge over the Coral Sea by Thursday, around Cooktown.

"It will move east south east and there is a high chance it will form into a tropical cyclone late on Friday, or early Saturday, but it will move well away from the coast."

Mr Kennedy said the main impacts would be heavy rain from Cape York to Mackay between Wednesday and Friday, and a flood watch was current in those areas.

A minor flood warning was in place for the Bohle River.

Mr Kennedy said a severe weather warning had been issued for coastal areas south of Cairns to around Proserpine.

Damaging wind gusts may be experienced in exposed coastal areas from late Thursday into Friday. Gale wind warnings for waters from Cairns to Townsville are likely to be issued from Thursday.

Mr Kennedy said the cyclone would move away from the coast, drawing the wet weather with it. He said the region would likely dry out from the weekend onward.