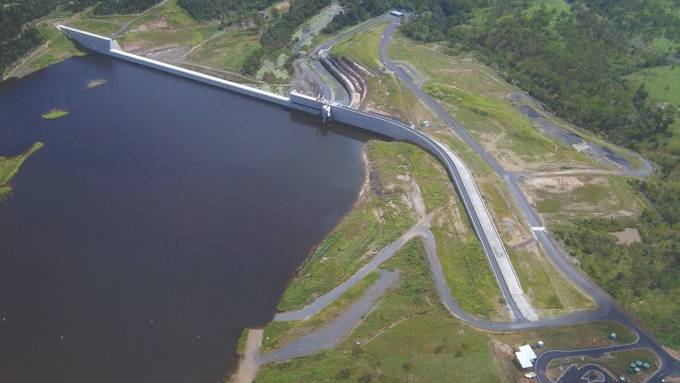 The Palaszczuk government has rushed new laws in parliament to demolish Paradise Dam west of Bundaberg.

THE Palaszczuk government has cleared the way to demolish Paradise Dam after rushing new laws into parliament on Tuesday.

In a move that has angered irrigators, the proposed laws will sweep aside 17 separate pieces of legislation, enabling Sunwater to demolish the 300,000 megalitre dam without obtaining the usual council or environmental approvals.

Farm group Canegrowers said there were concerns that Natural Resources Minister Anthony Lynham's legislative amendments would see the dam wall lowered before any reports into the structural necessity and economic impacts had been completed.

Canegrowers chief executive officer Dan Galligan said if approved, the amendments to the Resources Safety and Health Queensland Bill 2019 would mean work to lower the dam could begin as early as next month.

"We would urge the State Government to have a more detailed and transparent conversation with the community around this issue," Mr Galligan said.

"It's reasonable to expect the minister to consider all of the available government and external expert advice before proceeding with irreversible action to lower the dam wall.

"Everybody wants to ensure that all efforts are made to secure the safety of the community.

"However, it is also vital to the economic viability of the region that we safeguard the long-term security of irrigation water that the region's agricultural sector depend on."

The move has also angered the horticulture industry.

Growcom chief executive officer David Thomson said any good faith that Dr Lynham may have built with the local community since a vast amount of water was released last year from the dam without warning had been lost.

"Decisions that affect the future of an entire region, importantly its economy and its jobs, are coming out from the State Government without consultation or explanation," Mr Thomson said.

"It is easy to see why so much rumour surrounds these decisions, including the suggestion there's a hidden agenda to tear down Paradise Dam at all costs."

Mr Thomson said the timing of the legislation was particularly galling, coming less than a week after an international dam engineering expert had given confidence that there were good prospects for both making the dam safe and returning it to full capacity.

Paul Rizzo had told a packed meeting of concerned residents that not one dam of hundreds built in the same way around the world had ever been known to fail.

Dr Rizzo also advised that no dam built the same way with any structural issues had been unable to be repaired and restored to full capacity.

Bundaberg Fruit and Vegetable Growers managing director Bree Grima said if the Government was making decisions on evidence that was not yet public, then it must release this information immediately.

"It's simply not good enough for the government to hold an entire community to ransom based on public safety concerns," Ms Grima said.

"If the concerns are real then of course they must take action.

"But as of yet they've not produced the proof, while the experience of an international expert has given the community cause to think the risk to public safety has been inflated to serve another agenda."

LNP Leader Deb Frecklington said the people of Wide Bay were being treated with contempt.

"The Palaszczuk Labor Government gave no notice of this decision, has carried out no consultation and has given no explanation for it," Ms Frecklington said.