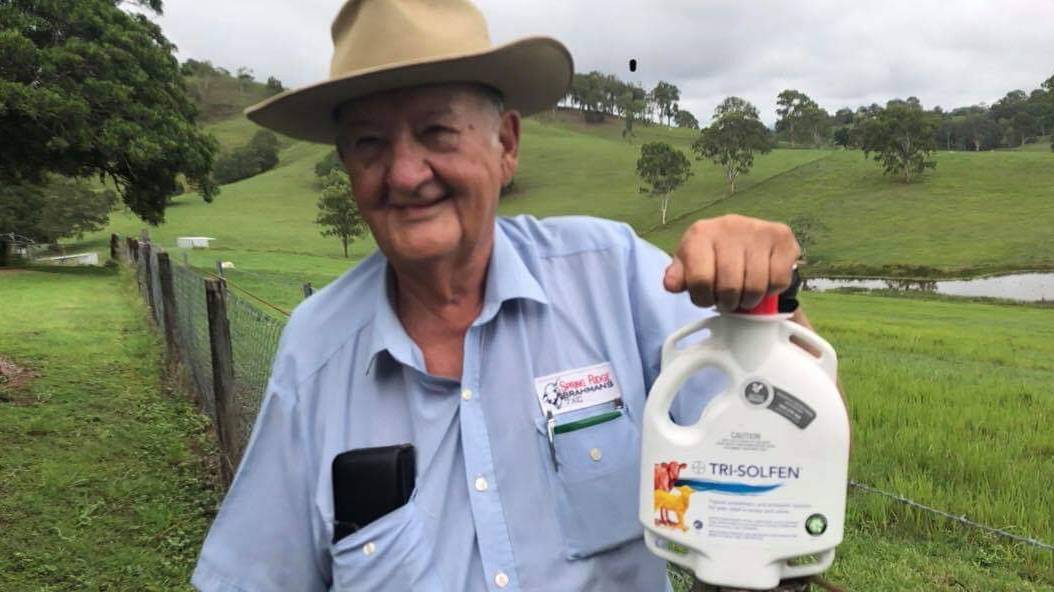 Gympie district cattle producer Ivan Naggs is using Tri-Solfen as a pain relief before and after dehorning his calves.

Tri-Solfen is being used before and after animal husbandry procedures at Spring Ridge Brahmans.

GYMPIE district cattle producer Ivan Naggs is using Tri-Solfen as a means of mitigating the pain associated with dehorning calves, both immediately before after carrying out the animal husbandry procedure.

Mr Naggs, who runs Spring Ridge Brahmans at Neusa Vale about 30km east of Gympie, said he applied the blue gel around the horn bud before and after using a hot iron to carry out the procedure.

"I believe if we can take the stress off these calves with products such as Tri-Solfen, then we need to use these products," Mr Naggs said.

"We have to give our cattle the best chance with the technology that is available."

The 40 year veteran of the Bayer company said technology played a key role in his business.

"The cost is minimal as far as I am concerned and is far outweighed by the benefits to both the animal and in terms of production," he said.

Mr Naggs said he had found Tr-Solfen to be particularly effective, and had eliminated any set-backs previously untreated calves may have experienced.

"They seem to avoid that setback after dehorning or castration they used to after in the 10 days to two weeks after the event," he said.

"I've seen them running around after two days like nothing has ever happened."

Mr Naggs - who is well known for his key roles within AgForce - places a very strong emphasis on both biosecurity and animal welfare.

"I am committed to both biosecurity and animal welfare because, ultimately, it is about doing the best we can for our animals and our farm businesses," Mr Naggs said.

"Whether its using Tri-Solfen for pain relief or Multimin supplements to boost mineral levels, there are also sound financial benefits involved.

"We have to continually work to get livestock production right. That's not only delivering for the consumer, but also about making sure the threats to our farm businesses are minimised."