A REVISED Bradfield water diversion scheme is back on the table after Queensland's LNP leader Deb Frecklington committed $20 million to a feasibility study. 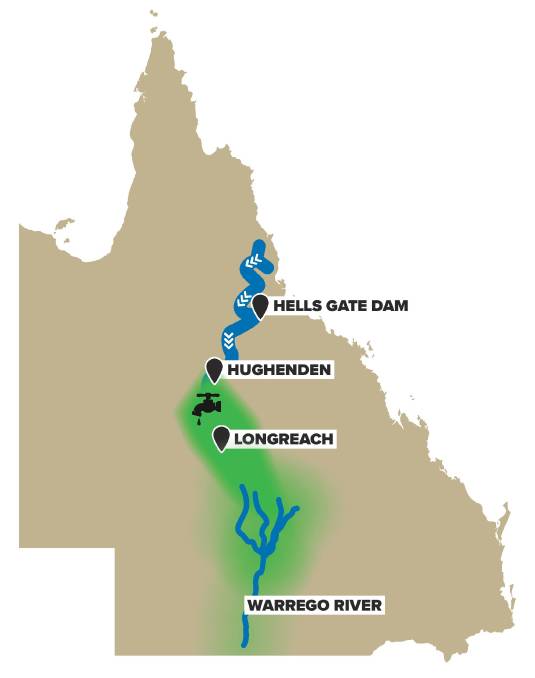 Instead of consuming electricity, the new Bradfield scheme would generate thousands of megawatts of power through a series of hydro-electric plants.

A REVISED Bradfield water diversion scheme is back on the table after Queensland's LNP leader Deb Frecklington committed $20 million towards a feasibility study.

Premier Annastacia Palaszczuk also indicated last week she was open to discussing the idea, which has drawn support from across the political divide.

Describing it as Queensland's biggest drought-busting infrastructure project, creating tens of thousands of jobs and irrigating an area larger than Tasmania, Ms Frecklington said the scheme would use water from the largest dam ever built in Queensland to create a new food bowl on the western side of the Great Dividing Range.

It proposes to almost double the height of the proposed Hell's Gate Dam to over 120m, drawing water from the South Johnstone, Tully, Herbert and Burdekin Rivers into a lake potentially twice the size of the Burdekin Falls Dam.

Controversially proposed by Queensland engineer John Bradfield in 1938 and knocked back ever since on economic, scientific and engineering grounds, the new model developed by former Queensland captains of industry Sir Leo Hielscher and Sir Frank Moore would use gravity to feed water from the Hell's Gate Dam through tunnels rather than pumping.

Instead of draining into Lake Eyre, as proposed by Bradfield, water would be diverted into the Warrego River and the northern basin of the Murray-Darling system and be reserved for southern Queensland farmers.

Ms Palaszczuk said the viability of a smaller version of the original scheme and potential environmental impacts should be explored, and was open to a conversation with Prime Minister Scott Morrison on the issue.

If elected in 2020, an LNP government would commission the CSIRO to begin advanced planning through a $20 million commitment to the new Bradfield scheme.

Related: Why Australia needs Bradfield, or at least its inspiration

The water infrastructure promise was supported by AgForce, with president Georgie Somerset saying they welcomed the vision from both sides of politics to improve the supply of water for growing agriculture and regional economies, particularly in the west of the state.

"Such a farsighted project as vast in vision and scale as this is going to require genuine bipartisan support over a long period of time," she said.

Ms Somerset commended what was seen as a science-based approach in commissioning the CSIRO to undertake a detailed feasibility study.

"The original Bradfield scheme had significant engineering and economic challenges so we agree with the need to take a fresh look at this 'big picture' idea," she said.

"Issues to be studied will include managing evaporation and distribution losses, availability of suitable soils, supporting infrastructure needs and costs, environmental sustainability and the ultimate benefit for local communities."

Reiterating one of the main concerns with the scheme, Ms Somerset said affordability would be a limiting factor.

"The cost of water will be a key issue as the government expects users to pay for planning, construction and ongoing maintenance of water infrastructure."

A long-standing proponent of the Bradfield scheme, Pauline Hanson immediately raised the possibility of overseas money being used to own the infrastructure and charging taxpayers to use it.

"The feasibility study used by LNP leader Deb Frecklington to support its policy is one that suggests foreign investment, foreign builders and then foreign ownership - the last thing we need is for a country like China to build and own an iconic project like this," she said.

She also queried the LNP support for the scheme, given previous criticism.

In a notice of motion last February, Senator Hanson moved for the Senate to call on the federal government to allocate $10 billion to commence the construction of the hybrid Bradfield scheme.

Senator Hanson said she had called it a game-changing project all along and was glad others were now talking about it.

"It's early days, and we still need to wait and see if the LNP actually is able to win the election, which is very far from a given, and then see if it actually proceeds with the scheme," she said.

Katter's Australian Party has been another of the staunch proponents of the Bradfield Scheme and federal leader Bob Katter said this week he was sceptical of state government abilities to follow through with announcements.

"My records indicate that there have been some 21 dams and weirs announced in Queensland by the LNP and to a lesser extent the ALP," Mr Katter said.

"And to my knowledge, not a single dozer has started up its motor on any of these projects.

"The LNP was in government in Queensland two and a half years ago and they announced a lot of dam schemes in their three years. But there is not even a single engineering plan drafted."

"Sir Frank and I have developed a concept...that works, financially, economically, environmentally and socially," he said.

"We have submitted our findings to the federal government. We have had tremendous public support, we now need positive support from the biggest head in our nation."