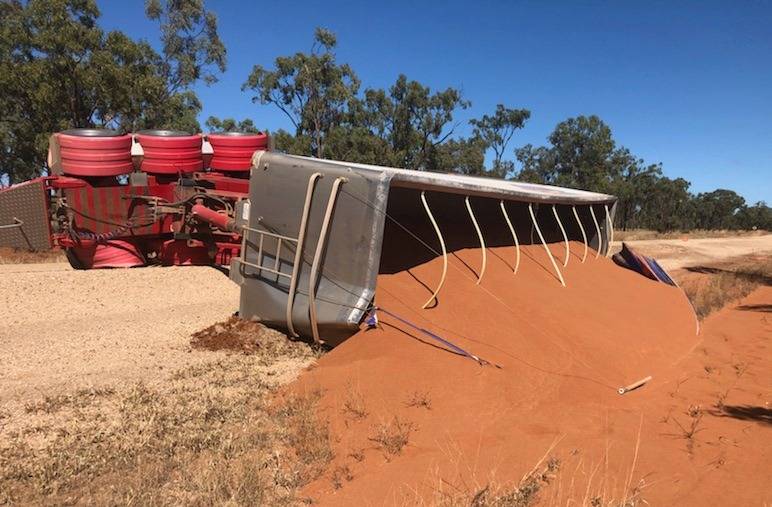 Traffic accidents such as this are becoming more frequent thanks to the state of the May Downs Road, Clarke Creek locals say. Photos supplied.

The community of Clarke Creek in central Queensland has declared "enough is enough" in its battle for major upgrades to the May Downs Road and Isaac River bridge, taking its lobby to Brisbane last week.

The community of Clarke Creek in central Queensland has declared "enough is enough" in its battle for major upgrades to the May Downs Road and Isaac River bridge, taking its lobby to Brisbane last week. 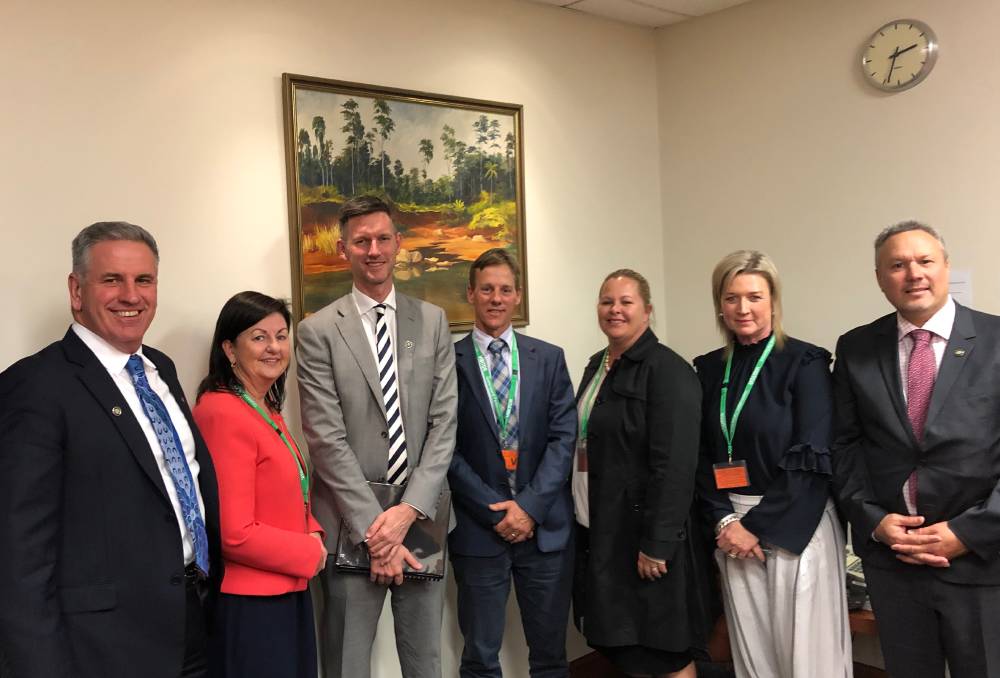 The state-controlled road intersects the Clarke Creek locality and is the main connection route between the Fitzroy Development Road and the Marlborough-Sarina Road.

Spokeswoman Lynise Conaghan said that in its current state the road was dangerous with deep pot holes, wheels ruts, and exposed edges.

In recent weeks a road train with a load of cottonseed became the latest accident statistic, rolling as it tried to avoid potholes filled with water after a shower of rain.

The accuracy of the depth indicator at the bridge has also been questioned. Ms Conaghan said local people were regularly rescuing drivers unfamiliar with the conditions that became stranded in the middle of the crossing when water was over it.

"If it rains upstream, so many rivers converge at this point - we don't have to have any rain to have the road closed," she said.

Comments on the group's Facebook page support its claims, with one person saying "I have been driving that road for 10 years and have come across 5 Roll overs 3 burnt cars and 2 floating down the Izacs".

Another wrote: "I have used this road to see patients but I no longer trust it as it is often flooded even when there is no rain...This road is gazetted as a road but in truth it is a BMX track." 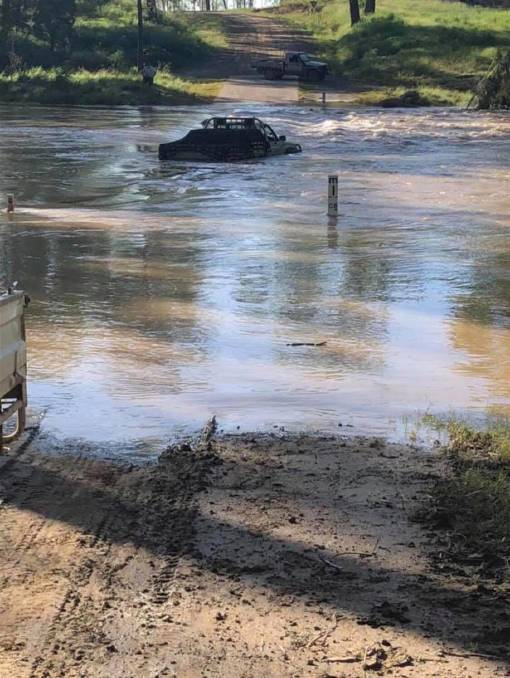 One of the vehicles caught in floodwater at the Isaac River bridge.

While saying last week's meetings with Transport Minister Mark Bailey and opposition leader Deb Frecklington were productive, Ms Conaghan said they were advised that work on roads was determined by traffic counts.

"We talked about the six renewable development projects approved for construction within a 100km radius of the May Downs Road, including the largest wind farm in the southern hemisphere to be constructed at Clarke Creek.

"And we pointed out that the Isaac region contributes approximately $6.35 billion of state gross domestic product per annum.

"We said, can we look at what's actually happening rather than traffic counts."

The official traffic count last year was 31 vehicles a day, 22 per cent of them heavy vehicles. It's not known whether that includes the days the road was closed at the bridge.

Ms Conaghan said from her observation from her twice-weekly work at the Clarke Creek school, more than that were using the road.

"We did our own road count when we were trying to get a mobile phone tower and our data was significantly different to Transport and Main Road's then," she said.

According to a Transport and Main Roads spokeswoman, planning is continuing on the best way to upgrade the road, including identifying priority sections for sealing and options to upgrade the Isaac River Bridge.

"This planning needs to be completed before costs can be estimated for future work," she said.

"As with all major roads projects, future funding will be prioritised with other needs across the district and the state.

"There is currently no funding allocated for detailed design or construction."

In the Mackay/Whitsunday district, there are 430 kilometres of unsealed state-controlled roads and 59 timber bridges.

Ms Conaghan said an Isaac Regional Council advocacy document showed that to construct a 3.6m concrete bridge with flood immunity would cost $12m, while 33.8km of 8.5m bitumen road would cost $50m and pavement rehabilitation would be $10m.

"We said, start with the bridge - at least then we'd be able to access our nearest town, Middlemount."

One hundred kilometres away, it has a secondary school, medical facilities, grocery shops and hotels. Rockhampton and Mackay are 200km away for the Conaghans and other Clarke Creek residents.

"We are not asking for a sports stadium or a shopping centre. We just want a road that is safe so that we can access our nearest town," she said. "It was pleasing to get a hearing, and everyone says they are keen to support us but we're not sure how that will play out."

The department spokeswoman said the condition of the road would continue to be monitored and maintenance works undertaken in coordination with the Isaac Regional Council.