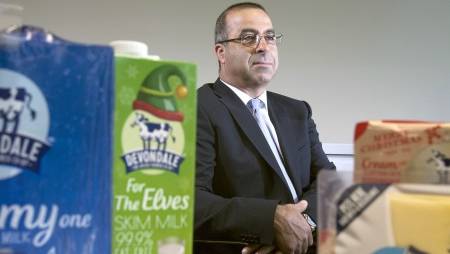 Murray Goulburn's former managing director Gary Helou and chief financial officer Brad Hingle have until August 14 to lodge an application to have a case brought against them by the corporate regulator put on hold.

Murray Goulburn's former managing director Gary Helou and chief financial officer Brad Hingle have until August 14 to lodge an application to have a case brought against them by the corporate regulator put on hold.

Justice Jonathan Beach ordered after a preliminary hearing in the Federal Court on Friday that any application for a stay of the action be logded by that date.

He scheduled a further hearing for September 13.

The Sydney Morning Herald reported that lawyers for Mr Helou told the Federal Court on Friday they were considering making an application to stay the misconduct proceedings.

The Australian Securities and Investments Commission launched the proceedings against Mr Helou and former MG chief financial officer Brad Hingle in late June for their involvement in the failure of MG-related company, MG Responsible Entity, to disclose to the ASX market-sensitive information in a timely manner.

This involved announcements made to the ASX in the February preceding the company's decision to cut the farmgate milk price for the 2015-16 financial year and downgrade its profit.

The case follows separate action brought by ASIC against the milk processor in 2017 for continuous disclosure breaches.

In that action, the court MG Responsible Entity to pay a $650,000 fine for breaching the rules.

ASIC alleges that Mr Helou and Mr Hingle breached their duties as directors and officers to act with reasonable care and diligence by:

ASIC is seeking that both men contravened sections of the corporations act and that each be disqualified from managing a corporation for a period deemed appropriate by the court.

The story Helou may seek to put ASIC case on hold first appeared on Farm Online.