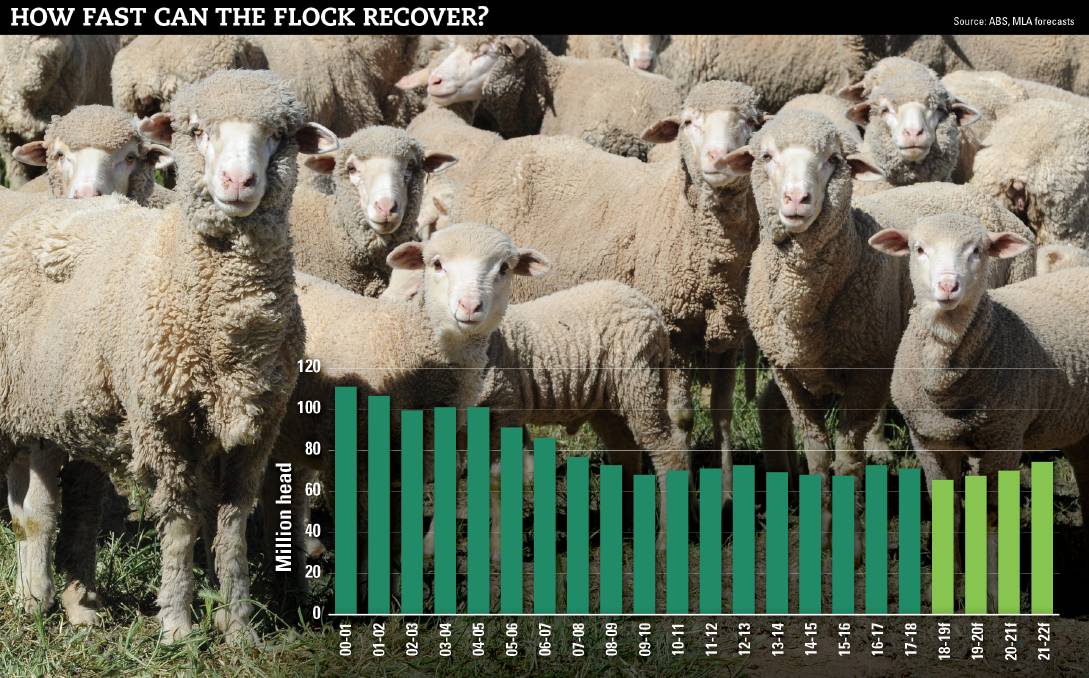 Industry leaders are hoping sheep numbers can quickly climb back over 70 million with a return of good seasons.

Probably the greatest issue facing the Australian sheep industry is the dwindling number of Merino ewes.

They are the cornerstone of the whole sheep industry, being at the core of wool production, while also playing a key role in producing crossbred ewes for the booming prime lamb sector.

And Merino lamb and mutton have been fetching record saleyard prices.

The national sheep flock is now around 65.8 million, with about 40m breeding ewes, although those numbers may need downward revision given the continued sell-off in recent months.

Traditionally, Merinos account for 75 per cent of the breeding ewe flock.

Serious rebuilding of the flock can't get underway until the return of good seasons across the big eastern sheep states of NSW and Victoria.

And even then industry leaders fear producers may focus on grabbing a slice of the booming market for prime lamb rather than self-replacing Merino flocks.

WoolProducers Australia president and Yass district Merino breeder, Ed Storey, said the decline in flock numbers was a serious concern at a time when international demand for both sheepmeat and wool was extremely strong.

"But we have a set of drought conditions in eastern Australia that are really tough," he said.

"We want to encourage people that when the drought breaks that Merinos and self-replacing wool flocks are some of the most profitable things you can invest in.

"The Chinese processing sector is keen for us to supply more wool.

"A Merino flock offers, at a relatively low level of risk, a wonderful, profitable future for many climatic zones," Mr Storey said.

He said some beef producers may increase sheep numbers post-drought given the expensive struggle many have faced feeding and watering cattle during the drought.

Chris Mirams, chairman of Sheep Producers Australia, said Merino ewes were the "engine room" for the prime lamb industry and their declining numbers were a major worry.

"Drought and unfavourable seasons have certainly made it extremely hard for many, many producers to maintain their breeding ewes.

"We certainly are deeply concerned and we will be looking at what kind of strategies and policies we can look at to try and create a rebuild of the flock.

"Reproductive success is front and centre in that, making sure our conception rates are high and our lamb survival rates are high.

"I think having confidence in seasons and (better) managing seasons are integral in that, too," he said.

The story We need to break the Merino ewe drought first appeared on Farm Online.