The meat industry says it is fed up after yet more illegal vegan activism, this time targeting a Brisbane butcher shop. 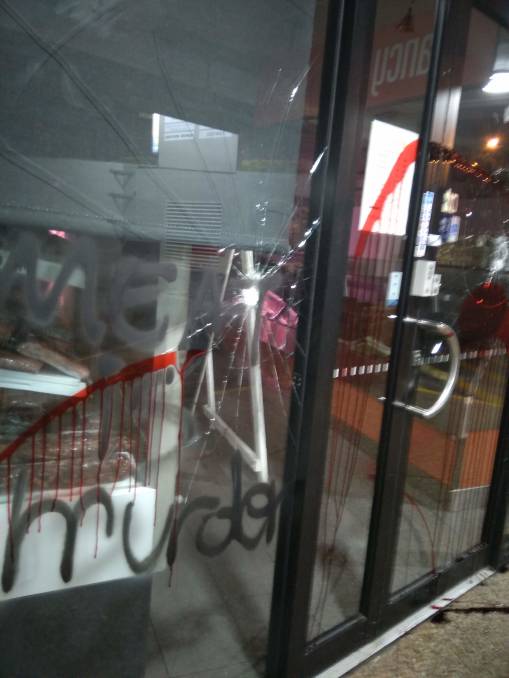 VEGAN ATTACK: The meat industry says it is fed up after yet more illegal activism, this time targeting a Brisbane butcher shop.

AN upmarket Brisbane butcher shop has been vandalised in an attack by a radical vegan activist.

Staff at Clancyjames's butcher shop in Taringa arrived to find fake blood, smashed glass made to appear like bullet holes and a spray painted message declaring 'meat is murder'.

Clancyjames owner David Bobberman said the shop was attacked at about 10.30pm on Tuesday night. The incident was reported to police by a customer who saw the perpetrator in the act. Police are understood to have made an arrest.

"When you come to work and there are two holes that look like bullet holes, you don't take that idly," Mr Bobberman said.

"This is a free country. By all means say what you want, but go about it the right way."

Mr Bobberman said the community response to the attack had been exceptional. He said social media had gone 'berserk' and people who were not even customers had come into the store to express their support.

The Australian Meat Industry Council, the peak industry body for Australia's red meat industry, says governments must recognise that anti-meat activism is affecting businesses across the supply chain and must be stamped out.

The attack follows vegan protests staged at a Millmerran feedlot and a meatworks near Warwick.

In the aftermath of those protests the Queensland Government introduced $652.75 on the spot fines for activists who raided farms and meatworks.

When you come to work and there are two holes that look like bullet holes, you don't take that idly. This is a free country. By all means say what you want, but go about it the right way. - David Bobberman, Clancyjames butcher shop

"Just a couple of months ago activists closed down a busy intersection in Melbourne and broke into a number of premises, only to walk away with a slap on the wrist.

"It sends absolutely the wrong message.

"We're heartened to know that our new Agriculture Minister Bridget McKenzie is on board with much tougher penalties for agri-activists.

"But it is critical that this is not limited only to on-farm activism. As we've seen today in Brisbane, there are other businesses feeling the brunt of this disgraceful behaviour."

Mr Hutchinson said it was time for penalties against activists to reflect community values. 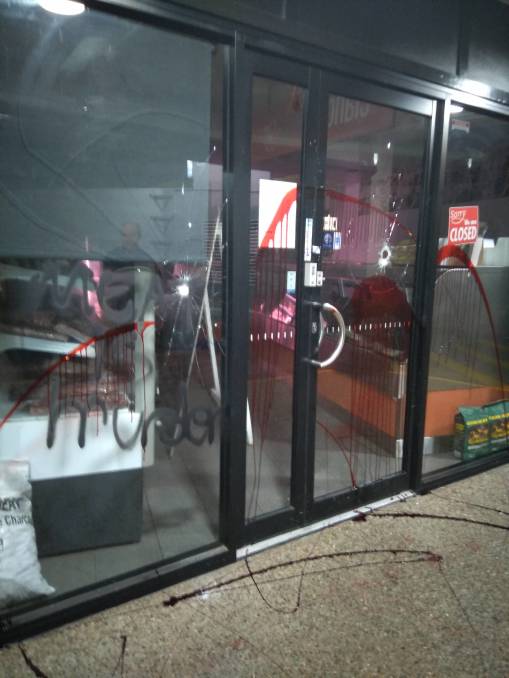 The Clancyjames butcher shop was attacked at about 10.30pm on Tuesday night.

"Of course people are entitled to their own views, but illegally entering facilities is just not okay," Mr Hutchinson said.

"It creates biosecurity risks, it leads to breaches of privacy, it is potentially unsafe for the activists themselves and at the end of the day it puts at risk jobs in regional communities.

"We need immediate action to deliver tougher fines and jail terms to curb this unlawful activity. These activists are criminals and they need to be treated like it.

"We call on both the Agriculture Minister Bridget McKenzie and the Minister for Small Business, Michaelia Cash, to commit to swift and decisive action to push through changes to legislation that will make it easier to prosecute illegal activism."

Australia's meat sector is worth $22 billion and provides an estimated 55,000 full time jobs. Meat is the seventh-largest export commodity in the country.