Banana prawns in the Gulf of Carpentaria are jumping out of the warm, shallow waters like plagues of locusts everytime a trawler steams over them, reports a skipper from the Raptis fleet. 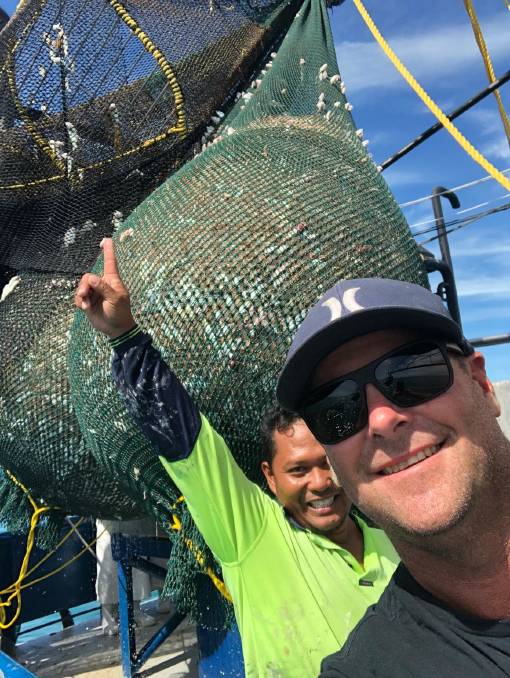 Raptis Pearl skipper Mick McGillivray, with one of his deckhands, celebrated the best start to the banana prawn season in the Gulf of Carpentaria since 1974.

A two billion dollar damage bill to Queensland graziers, with an AgForce estimate of 664,000 head dead after February floods - the worst since 1974 - has been compensated to some degree by the best start to the banana prawn harvest in the southern end of the Gulf of Carpentaria for decades.

Hardest hit areas, like Julia Creek and McKinlay Shire where 274,000 head were lost, drain into the Flinders River which has nourished an explosion of lucrative banana prawns in warm shallow waters just beyond its mouth.

The heavily managed wild harvest, affecting a fleet of 52 trawlers whose owners sell almost 80 per cent of their catch into the domestic market, with 20 per cent going into China and a bit to the US, opened at the start of the month and usually lasts two and a half months, or until the average daily catch across all boats in the fleet falls below 500 kilograms.

For skipper of the Raptis Pearl Mick McGillivray, a 26 year veteran of the northern prawn fishery, his first few days averaged 9000kg and the first 16 days totaled 91 tonnes, making the start the best in his career.

Detailed log books are the key to catching big number of crustaceans, with information shared among old and new skippers. Spotter planes look for mud boils on the surface, radioing back latitude and longitude.

"This has been the best start to any season since I have been up here," he said. "But it is doubtful that the rest of the season will be that great as conditions have been perfect and we have gone through the best moon phases."

Annie Jarrett, chief executive officer of the Northern Prawn Fishery Industry Group, confirmed that the active, slow moving monsoon trough last February that caused so much damage to tropical Queensland's grazing industry, had indeed brought a blessing to the prawn fishery in the southern gulf.

"Skippers are suggesting that the start of the season might have been as good as '74," she said. "But the average over time during the course of the season may well be very different."

There has been a general lack of decent wet season right across the top end, with the exception of the flood affected areas. Meanwhile, CEO of the Australian Fisheries Management Authority, Wez Norris, said that wild harvest in the gulf was unusual in the way it brought commercial interests and government authority together to co-manage a sustainable industry, with a tick of approval from the Marine Stewardship Council. That "tick" promotes the motto "keep it wild, traceable and sustainable", and allows access to a multitude of markets across the globe. The northern prawn fishery has been associated with the council for the past seven years.

"Co-management of this fishery has allowed us to move away from the historic adversarial approach," said Mr Norris. "We find that with the industry more directly involved in bringing about new tools of management we can move forward."

An example of this is a new by-catch reduction device called the "Tom's fisheye" which will be available to the fleet from next year, with further testing during the Tiger prawn harvest beginning in August.

The fisheye creates an area of low pressure within the trawl net as it is pulled through the water and increases access to a crucial gap where unwanted fish can escape. Already there are different escape routes for bycatch, but the fisheye promises a reduction in unwanted species by 40 per cent.

"The northern prawn fishery continues to demonstrate commitment to reducing bycatch through design and trial of new equipment and technology. It is important that fishers can use an effective device that will suit different operating conditions," said Mr Norris.

For the current Banana prawn season, prices for product are usually worked out towards the end of the harvest and with high supply they would naturally be expected to soften. Ms Jarrett suggested something like $14 a kilogram could be expected.

When it comes to Tiger prawns, with a target market of Japan, there will well be a very different scenario with skippers like Mr McGillivray saying good hauls of bananas generally mean not so flash catches of the striped variety, which takes its name from that jungle predator.

However the start to the current banana prawn season has provided good earnings for fishermen, shared between boat owner, skipper and crew, which in the case of the 23m long trawler Raptis Pearl, includes four Indonesian deckhands and a Japanese cook along with an engineer and first mate. The vessel makes its own ice and burns 2500 litres of diesel a day.

A 26 year veteran of the fishery, with 21 years as skipper, Mr McGillivray hails from Evans Head, NSW - the town which provided the first fishermen who pioneered the Karumba based northern prawn fishery.

The story Prawns galore after Queensland floods first appeared on The Land.