The sale saw a total clearance of 65 per cent.

QUIET, cost effective and productive were words used to describe the draft of the 28th annual Highlands Droughtmaster Bull Sale held in Clermont on Friday.

With a catalogue of 52 registered sires and 26 herd bulls on offer, agents and vendors went to work.

It was a tough day in the office as the sale saw a total clearance of 65 per cent, with final figures showing the 12 vendors collectively average $5912.

Ongoing dry conditions throughout the Central Highlands coupled with the disastrous weather events to the north resulted in a decrease of $1794 per head from the 2018 sales average.

Cracking the sale top for the day was Wajatryn 2499 (P) from Carolyn and Warren Kenny, Wajatryn Droughtmasters, Gayndah, selling for $18,000. The 28-month-old bull will find his new home with the Dahl Family, Brolga Gully, Baralaba.

The young bull sired by Wajatryn T- Rex (P) D5 and out of Wajatryn 3-228-H carried all 950 kilograms into the ring, with a 131cm sq eye muscle area, and boasted a scrotal circumference of 36cm.

"You bring to the sale what you feel represents your cattle best," Ms Kenny said.

"Warren and I are very grateful for the invitation and opportunity to sell at the sale, with this being our second year.

"It is always great to see your bulls go to such great cattle people." 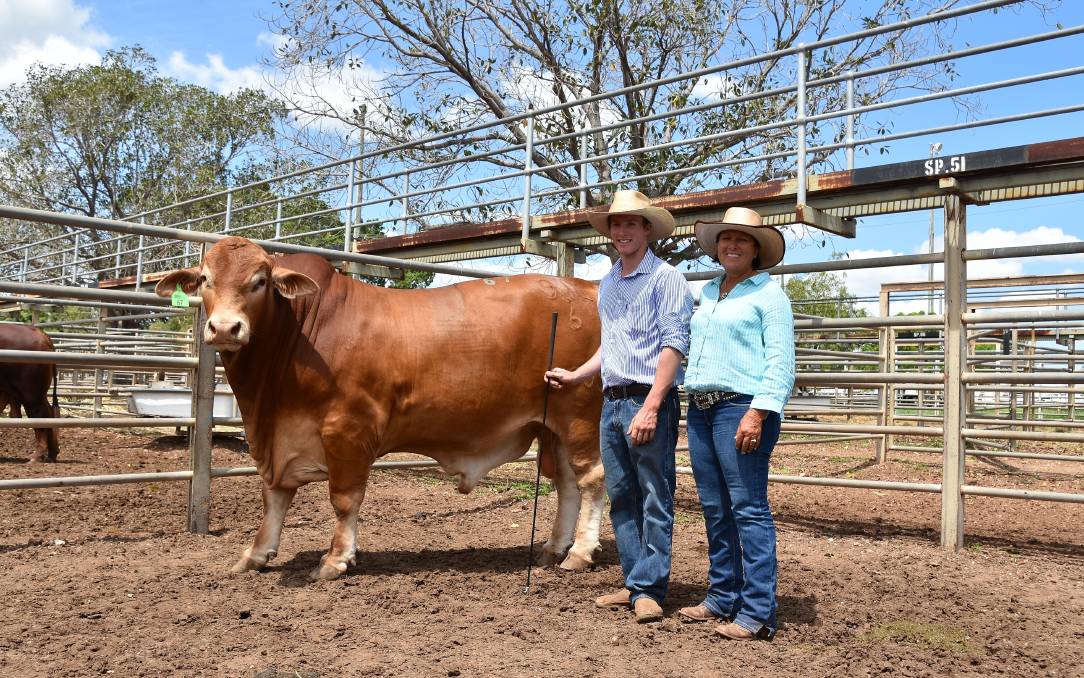 "He was the pick of the draft. With a bit of length, a bit of depth, good sheath and a desirable head, he is exactly what we look to breed," Josh Perry said.

The Finger family purchased three bulls at the sale which included a Wajatryn bull and also the top priced herd bull for the sale Almafi 16114, who sold for $11,000 on account of vendors James and Aleisha Pisaturo, Almafi Droughtmasters Inga Downs, Dingo.

Redskin Droughtmasters averaged $5660 from the six head sold in the ring.

"It was a good pen of bulls but the sale just ran out of buyers.

"Some bulls were simply out of bidders' budgets, which is a true sign of what is happening in the north and what we see with drought.

"This sale is a classic example of good bulls and a good sale."

As sales throughout Central Queensland kick off, charitable generosity continues to shine through. More than $2550 was raised on the day for the Royal Flying Doctor Service, with studs donating $50 from each bull sold in the ring to the worthy cause.