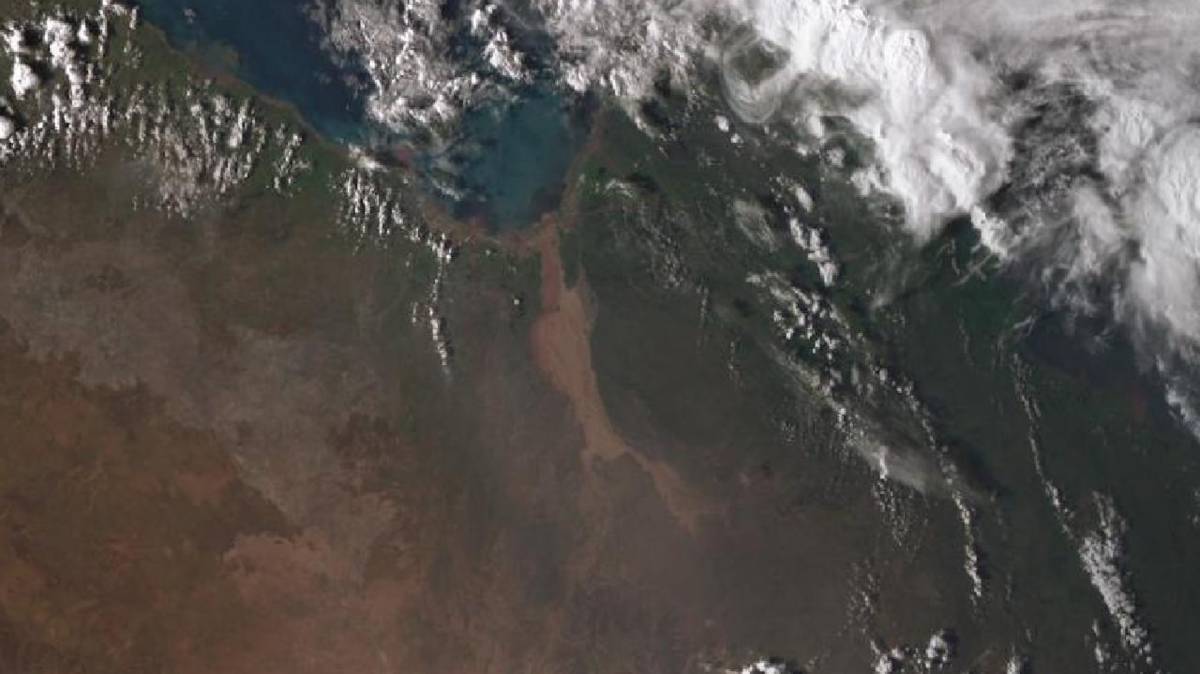 The huge expanse of floodwater in north west Queensland can easily be seen from space. Image - Bureau of Meteorology.

Carpentaria Shire authorities are reasonably confident water from the record-breaking Flinders and Norman River flooding won’t be a threat to the towns of Normanton and Karumba.

Carpentaria Shire authorities are reasonably confident water from the record-breaking Flinders and Norman River flooding won’t be a threat to the towns of Normanton and Karumba.

The water bearing down on the Gulf from the Flinders River has been described by the Bureau of Meteorology as the most significant flood in at least the last 50 years.

According to BoM duty forecaster, Vinord Anand, the previous 1974 record level of 15.67m at Walker’s Bend had been well overtaken by 7pm on Friday with a gauge reading of 16.75m, and was still rising.

The bureau has been struggling to supply the latest data for Gulf river catchments, thanks to a transmission fault at Mount Isa.

“A lot of gauges use satellite telemetry and there’s been an outage,” Flood Warning Centre hydrologist, Paul Birch, said, adding that it looked to have been resolved.

In some isolated places where records were set in 1944, Mr Birch said water levels were close to exceeding those records before the data outage. 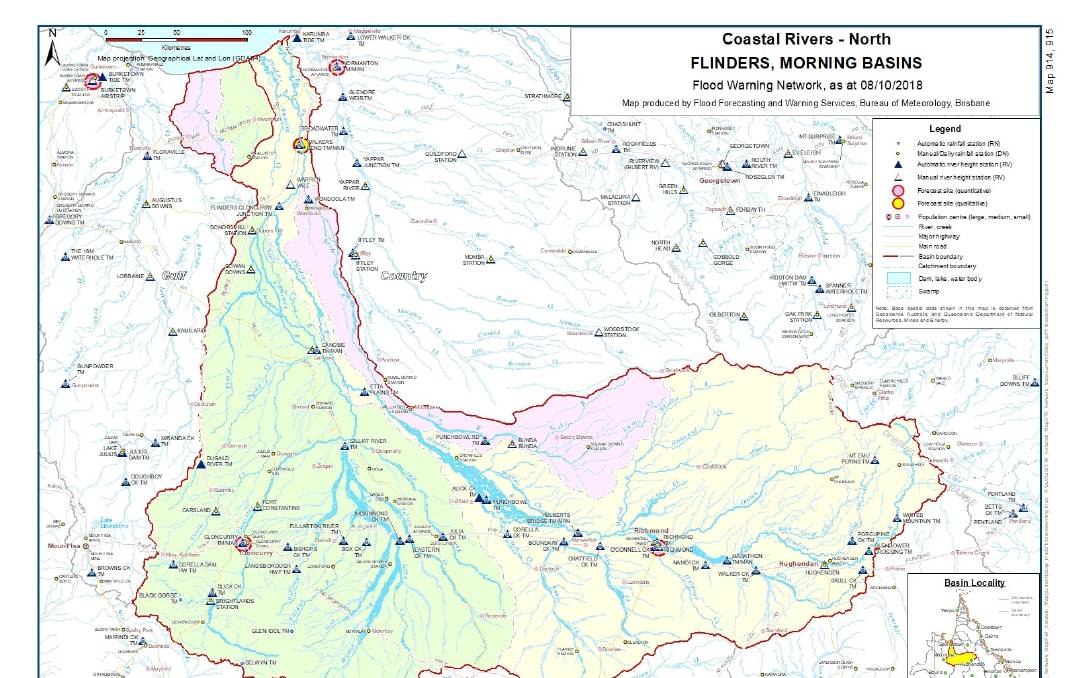 The enormous volume of water in the Flinders River has begun breaking into adjacent catchments but Carpentaria mayor, Jack Bawden, said on Saturday evening a helicopter inspection had shown most of the flood was breaking out on the river’s western side.

“We’ve never been in this situation,” he said.

“It’s usually us getting the rain and dealing with it, but we’re the empty pots waiting to be filled.

“Once it gets down our end, the flood spreads out too, because it’s so flat.

“We think the only way Normanton and Karumba would be in danger is if the Norman (River) gets a hell of a lot higher than now.” Another thing in their favour was that tides were dropping.

Cr Bawden said properties in his shire along the Flinders River were being smashed as badly as those further upstream.

“We always knew this one would write itself into the record books,” he said. “There’s no hills or high ground for people to muster their stock onto.”

A lot of properties in the shire are owned by companies, who Cr Bawden said had done all their people moving well ahead of the water.

“Warrenvale is well and truly flooded, and Glenore is a little island,” he said.

To keep people’s minds at rest, the Carpentaria shire plans to fly the river daily to keep an eye on heights.

The bureau said major flooding would continue along parts of the Flinders River for at least the next week as floodwaters move downstream. 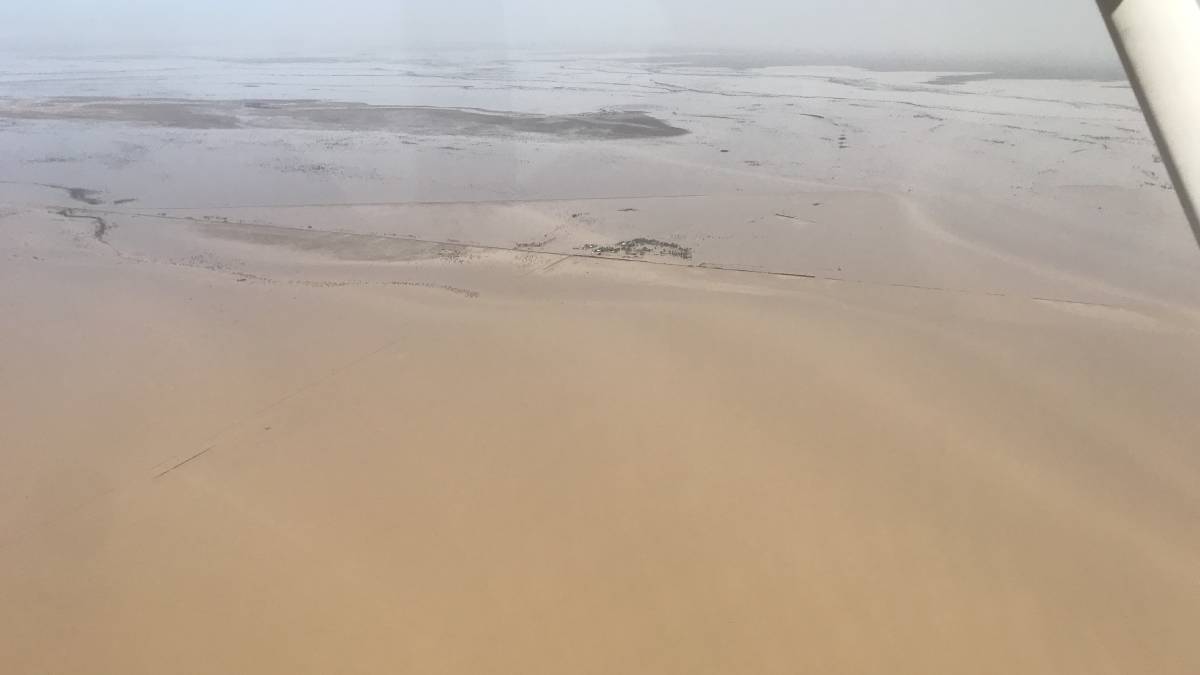 An aerial view of the floodwaters that continue to cover the landscape between Richmond and Julia Creek on Saturday. Picture - Roger Hill.

River level rises are expected to be working their way downstream to Burketown Township during the weekend. Reports have been received of wide breakouts from the Leichhardt River around the Augustus Downs area and working their way towards the Amraynald area.

There are currently no observations available for the Albert River at Burketown Airstrip, however a manual check at 10am shows no appreciable rises are being observed and levels remain below the minor flood level (5m).

Major flood levels continue to slowly ease along the lower reaches of the Leichhardt River in the Floraville area during Saturday afternoon. Reports have been received of wide break outs of floodwaters from the Leichhardt River around the Augustus Downs area and working their way towards the Amraynald area. On the upper Leichhardt River, Julius Dam continues to spill though levels are easing very slowly.

Major flooding is easing at Richmond and remain high for some time. As the flood peaks from the Cloncurry and Flinders converge, floodwaters are spreading out across the floodplain, particularly in the Canobie area, and will remain high at least into next week.

The latest available data (as at 7pm Friday February 8) has Walkers Bend at a record flood level of 16.75 metres, which is about 11.5 m above the bridge level on the Burke Development Road. This level exceeds the 1974 record level of 15.67 metres, with higher levels possible as further and more up-to-date data becomes progressively available overnight. River levels will continue to rise over the weekend and remain well above the major flood level (5.60 m) throughout this week.

Moderate flood levels are rising on the Norman River at Yappar River with breakouts from the Flinders River adding flood volumes into the upper Norman River. Downstream, slow river level rises and minor flooding continues between Glenore Weir and Normanton.

The Norman River at Normanton is currently at 2.54 metres (minor flood) and falling. However due to the magnitude of the flood on the Flinders River, water is moving into the Norman catchment. This will result in further river level rises through to Normanton during the weekend with moderate flood levels (above 4m) likely during Sunday into Monday. Higher levels and major flooding is possible early into this week.

A #flood so vast it can be seen from space! 🛰️ Clear skies today have revealed the extent of the flooding in #NWQld with the #FlindersRiver experiencing its most significant flood for more than 50 years. See Warnings ⚠️ for further info: https://t.co/XbyBGRG5hapic.twitter.com/BfRFfDya39