“What will happen to us if Angel Flight folds? Will we just be left to die?” 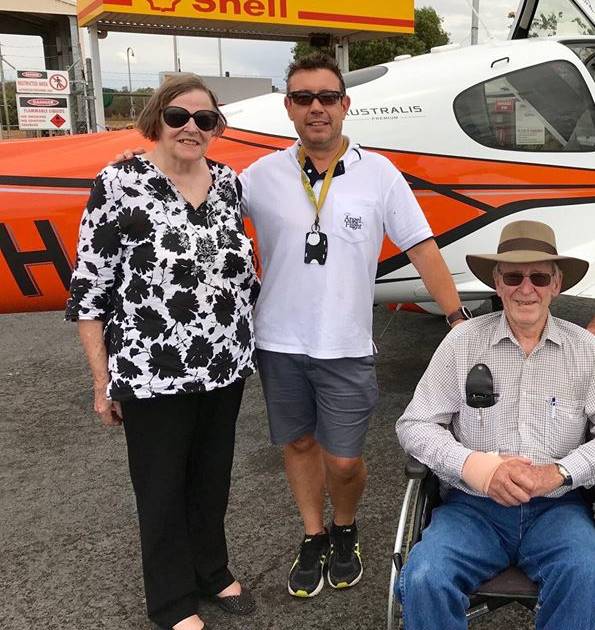 Pilot Morne Terblanche, centre, pictured with Lindsay and Nigel MacDonald, Blackall, preparing for an Angel Flight trip to Toowoomba. The couple are among thousands worrying they'll be left stranded if the latest changes proposed by CASA are brought in.

“What will happen to us if Angel Flight folds? Will we just be left to die?”

Blackall’s Nigel and Lindsay MacDonald are among the hundreds of rural people accessing the services of the charity aerial medical transport service threatened with an uncertain future.

The Civil Aviation Safety Authority is considering a plan to introduce a new minimum safety standard for community service flights, which Angel Flight says could see up to 80 per cent of their volunteer pilots drop out.

People such as Aircraft Owners and Pilots Association executive director, Benjamin Morgan, say thousands of private pilots will withdraw from the service, judging it to be too onerous and unsustainable to continue volunteering.

The latter has been estimated as costing as much as $85,000 for a Beechcraft Bonanza A36 engine, and higher for others.

Nigel, 83, and his wife Lindsay, 76, who is his carer, live on a property south of Blackall and have used Angel Flight services seven or eight times since Nigel was diagnosed with cancer three-and-a-half years ago.

The service is their only viable means of accessing quarterly scans and monitoring services that are not available in western Queensland.

Situated 900km from Toowoomba, where Nigel’s specialists are located, driving is no longer a feasible option for the couple and there are no direct commercial flights between the regional capital and their home town.

While they could transfer to a Brisbane specialist and travel via one of the three Qantaslink services available weekly, it leaves Lindsay juggling a wheelchair and baggage from the carousel onwards at Brisbane airport.

“I experienced how awful that was once, when we had to use a Brisbane specialist,” she said.

“With Angel Flight’s service, people meet you on the ground and transport you to your appointment and accommodation.

“We rely very heavily on Angel Flight and are extremely concerned about what is happening.

“We cannot imagine how we will cope if this essential service is no longer available to us.”

She said they had been flown by pilots from all spheres of life, from a current Qantas pilot who took them from Blackall to Toowoomba and back one week and hundreds of passengers to the US on a Boeing 737 the next, to a Sunshine Coast Hospital doctor who hired a small plane from a commercial service.

“Angel Flight in an administrative sense are absolute sticklers for the rules – we need a medical certificate each time we need to travel, sign waivers and have to comply with every regulation they ask for.”

Twice they have been in situations in the air that didn’t go to plan but they said the professional attitude of the pilots had been totally trustworthy.

One occurred in March 2018 when summer storms were building up. They were advised they may not reach their destination and may have to overnight in Roma.

In fact, they had to put down in Mitchell at the pilot’s discretion after constant communication with the Bureau of Meteorology and contact with Angel Flight to advise of the change to the schedule.

“We arrived in Toowoomba the next morning with 20 minutes to spare before our first appointment,” Lindsay said. “They’re not looking to kill themselves, they’re very careful pilots.”

She acknowledged that safety was paramount for the service, describing the situation for Australia’s politicians as being a difficult one.

Neither the government nor opposition transport spokesmen, Michael McCormack and Anthony Albanese, were prepared to take a stand on the matter on Friday.

“But all the pilots say to maintain their planes to charter standard is out of the question,” Lindsay said.

“What’s CASA’s answer to what will happen if 80 per cent of the pilots drop out?

“That’s absolutely frightening and they don’t have a solution. Do we just stay home and die?”

CASA’s comments to date have concentrated on regulatory oversight, not on the outcomes that might result from changes.

One alternative put forward was the Royal Flying Doctor Service but Lindsay said she thought they were fully stretched with their emergency medical retrieval service.

“I don’t know if it would be appropriate for them to take it on,” she said. “The service would have to be greatly expanded and someone would have to pay.”

If Nigel and Lindsay were to undertake their quarterly trips south via the commercial service to Brisbane it would cost a minimum in $1500 in airfares for the pair.

Cheaper flights are available but Lindsay said they would understandably be booking the ones that gave them the flexibility to cancel.

“We would qualify for the Patient Transport Subsidy Scheme for each of those flights, payable by the Queensland health department, so in actual fact, this could be seen as cost-shifting onto volunteers,” she said. “Angel Flight is saving them a lot of money.”

Speaking from their sheep and cattle property south of Blackall, which is still in the grips of a drought stretching all the way back to 2013, Lindsay said they had all the problems of how to manage their property while they were away, as well as managing a diagnosis of cancer.

“Having someone to look after the transport problem, having that taken away, is a great weight off your mind,” she said. “We have enormous respect for Angel Flight, its pilots and the people on the ground.”