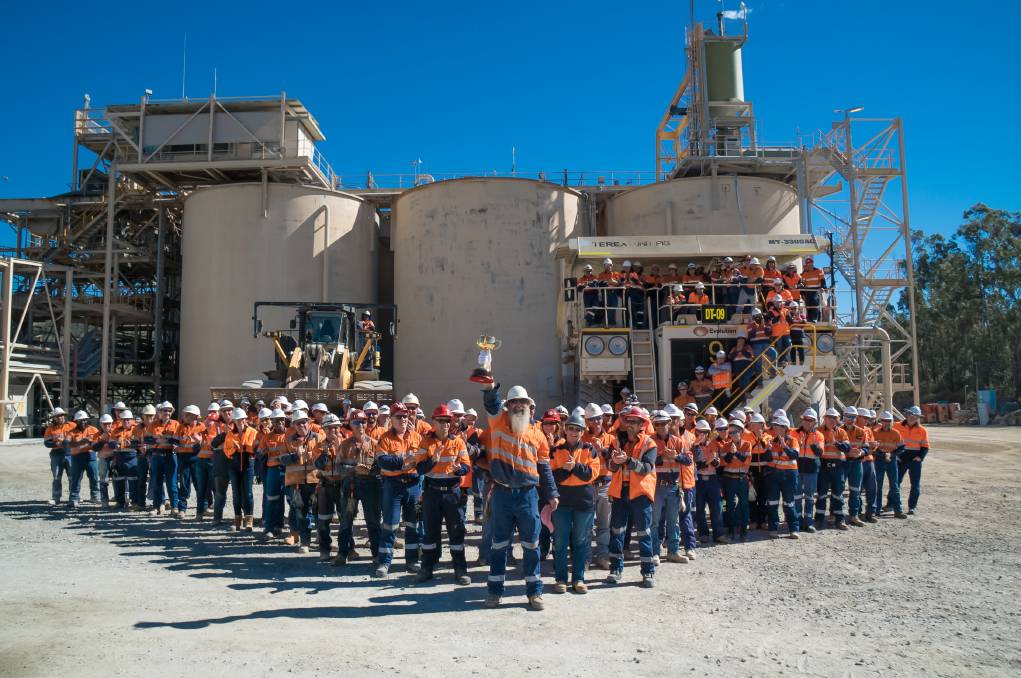 Staff at the Mt Rawdon Gold Mine near Mt Perry had a surprise visit from the 2018 Lexus Melbourne Cup earlier this year. The Melbourne Cup will tour the again this week and there are plenty of celebrations planned as it holds a home town connection.

The 2018 Lexus Melbourne Cup will visit the tiny township of Mt Perry next Saturday and the local community is bursting with pride, as the Cup holds a home town connection.

It is believed to be the first time in the Melbourne Cup’s 157-year history that precious metal from Queensland has been used, and it was mined at the local Evolution-owned Mt Rawdon Gold Mine, near Mt Perry.

The Mt Rawdon has produced more than 1.5 million ounces of gold since first production in 2001, which converts to 50 tonne of gold bullion.

The mine employs 250 staff, of which about seventy five per cent of live in the Wide Bay Region, and operates on a 24/7 basis.

The mine is a major lifeline for the local community throwing its support behind many community events.

The Melbourne Cup will travel to Mt Perry over September 14 and 15 with plenty of celebrations planned.

During the tour, the Cup will visit the local Mt Perry State School where students can be photographed with the prized possession.

There will be a charity ball on the Friday evening for the general public providing more photographic opportunities, and at phantom ‘toy horse’ race meeting the following day.

Tim Murphy, Geology Manager for Evolution based at Mt Perry, said that to provide the gold for this year’s Melbourne Cup was a big event for the company, and for Queensland.

“It is a great morale boost for the employees and the community,” he said.

Once the rock is extracted it is processed into a Dore bar, which is roughly 50 per cent gold and silver and shipped to the ABC Refinery in Sydney.

“Evolution has a deal with ABC Refinery, and it is this refinery that has a contract to supply the gold for the Melbourne Cup,” Mr Murphy said.

The Melbourne Cup trophy is valued at $200,000, is made from 18-carat gold and contains 44 pieces that are hand spun over a 250-hour production process.

It is awarded to the winning owner, while the trainer and jockey also receive a miniature replica of the cup.

President of the Mt Perry Race Club, Joy Jensen, said the locals take great pride that the gold is returning home in Melbourne Cup glory, and the ‘Cup and Country’ race meeting would attract a crowd of about 200 locals.

“Racing Queensland cut our race meeting funding in 2003, and the owners of the Mt Rawdon mine supported us and we were able to self-fund the meeting,” Mrs Jensen said.

“We proved to Racing Queensland we were worthy of a race date and we had our funding returned the following year.”