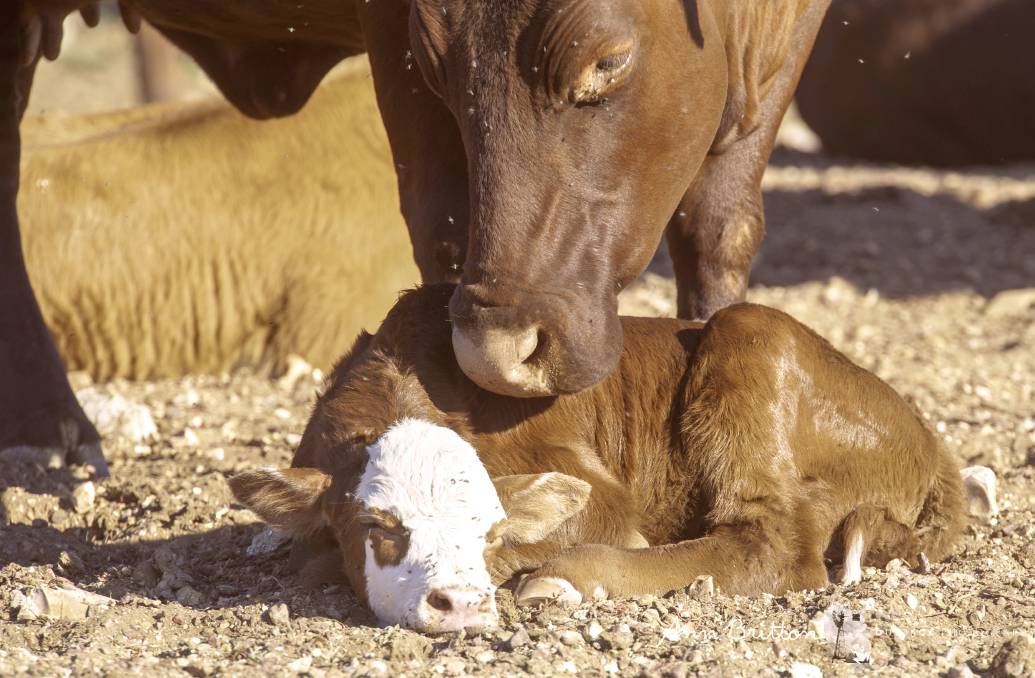 Fine article: The calf pictured is representative of the high quality cross progeny the Brittons are producing out of their Santa Gertrudis/Droughtmaster females by Hereford bulls purchased from Jarrah Cattle Company.

The Britton family at Boulia are putting Hereford bulls over their Santa Gertrudis/Droughtmaster-cross with impressive results being achieved in the progeny being produced.

A recent decision by the Britton family at Boulia to put Hereford bulls over their Santa Gertrudis/Droughtmaster-cross breeding herd to bolster the diversity of their market accessibility has led to impressive results in the progeny being produced.

Rick and Ann Britton, along with daughter, Claire, run the family-owned breeding and fattening operation across several properties in the arid natural range landscape of north west Queensland under the banner of Goodwood Pastoral Company Pty Ltd.

“Goodwood”, “Black Mountain”, and “Clearview” have been home to the Britton family since 1973, as Rick’s parents, Lou and Lynn, worked on the properties while raising Rick and his brothers.

Rick said they’re very fortunate to have access to a diverse range of land types across their properties.

“If you combined all our properties, the land would be fairly evenly divided between the flooded Channel Country of the Burke and Wills River system and the Hamilton River, open plains with Mitchell grass downs, and iron stone and hill-type country,” he said. Big job: Rick and Ann Britton, along with their daughter, Claire, are currently running a herd of 5000 head across eight properties encompassing 189,860 hectares of arid natural range landscape in North West Queensland.

He said “Black Mountain” is used as the primary breeding block, from which steers are sent to the fattening blocks at “Scarsdale” and “Goodwood” in the Channel Country from where they’re then sold on as Jap Ox to JBS at Dinmore or to the heavy live export market out of Darwin.

“To ensure our cattle are viable for entry into as many markets as possible we purchased ‘Mudgeacca’ in July 2016, which we’re using as an organic breeding block from which where we’re selling weaners straight off their mothers.

“We’re in the process of trying to get some of the Channel Country land organic certified so we can fatten the steer portion.”

Starting as Santa Gertrudis breeders, the Brittons trialled several crosses over the years including Red Brahman and Angus, before settling on a Santa Gertrudis/Droughtmaster-cross, which they’re now crossing a second time with Hereford bulls.

Mr Britton said over the years they’ve always had the odd Hereford-cross as his father and uncle always liked the breed.

“We only started honing in on expanding the use of the breed within the operation in the last 18 months.

“We’re using Hereford bulls over our Santa Gertrudis/Droughmaster-cross breeders in an 18 month rotation.

“We aim to produce a 300-420kg carcase weight Jap Ox article but because of where we’re situated, we need to be able to sell into any market at any time.

“We operate realistically, so we’ll sell early if it eases the pressure on our long-term sustainability.”

He said the softness inherent to the Hereford breed meshed well with the positive traits of their Bos Indicus breeders.

“The Hereford breed has always impressed us, the cross always comes through well-finished even with the progeny having been bred into our hard country.

“We’re producing organic weaners at ‘Mudgeacca’ with the Hereford bulls, and with the Channel Country we have access to we have the capability to get weight on them quickly and efficiently making them ideal for entry to the processor market.”

Mr Britton has previously said that most of the country in the district could be classed as organic by default, with a little record keeping, but he was going to “see how the market rolled” before he made any decisions about moving the rest of his operation in that direction.

He said they’ve been purchasing Hereford bulls from Sam Becker at Jarrah Cattle Company, Banana, Qld, from which they now have “impressive” calves on the ground.

“We like the Jarrah red bulls as they have a great temperament, a sound big boned structure and they’re free-walking types.”

Mr Britton said when attending Hereford stud sale, good carcass bulls with good structure from hip to brisket are the traits they look for.

While they’re only running 50 per cent of their usual numbers at present due to the dry, in better climatic conditions the Brittons have a carrying capacity of 9000 head.

“We average 225mm of rainfall annually but there is a large variation in that as some years, like at present, we receive below 50mm and in better seasons we can get up to 300mm.”

“To counter the protracted dry periods we encounter, we’ve incorporated wet weather spelling into the operation and we have Mitchell Grass grazing boundaries.”

He is a fifth-generation Boulia resident and worked for 20 years as a ringer, overseer and manager throughout the district before taking over operations at ‘Goodwood’ in 1996 from his parents.

Mr Britton is the current Boulia Shire mayor and also sits on many community and beef industry boards while Ann is a keen photographer and promoter of the beef industry and outback lifestyle.

He said being a cattle producer and the shire mayor doesn’t leave him much free time but in those rare moments that he does have, he enjoys the peace and comfort of being surrounded by his family.

“Photography is Ann’s passion and it’s a something she excels at with her work being showcased at several galleries through the years.

“Claire is right into her campdrafting but because of the high workload within the operation at present due to the dry, she hasn’t had much time to pursue it recently.”