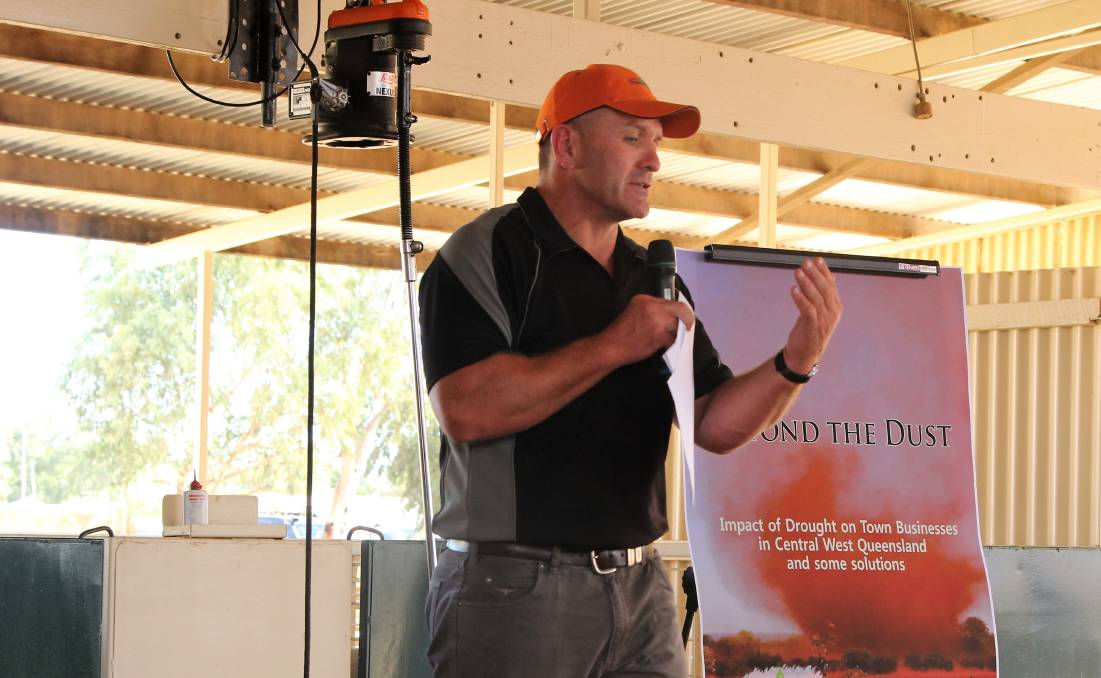 A prolonged education initiative is what farm safety advocate, Shane Webke, said was needed to get urban voters delivering more sympathetic policies for the bush.

A prolonged education initiative is what farm safety advocate, Shane Webke, said was needed to get urban voters delivering more sympathetic policies for the bush.

The rugby league legend turned commentator was officially launching the Western Queensland Drought Appeal Beyond the Dust report on the effect of drought on bush towns, at the Longreach Show on Saturday.

He told those at the launch that his 17 years of living in Brisbane as a footballer had shown him that while urban dwellers didn’t understand rural issues, they would be happy to help if they were made properly aware.

“But more importantly, they'd be happy for our government to help,” he said.

“This is why this report is a good thing, because emotive pictures of stock and people doing it tough just doesn't cut it,” he said. “What will cut it is a prolonged education initiative, things like this report, that let the people in cities know – you'd find, if they had a better understanding, they'd empower our governments to make better policies for us.”

WQDC chairman, David Phelps, said the purpose of the report was to lobby for better policy outcomes for the region and provide evidence for future decisions on drought response.

He said it had been pleasing to hear federal Northern Resources Minister, Matt Canavan, who was present at the launch, along with Agriculture Minister, David Littleproud, say he would table the report with Cabinet.

“I think that's a really good starting point, that we get the facts and figures about the ongoing impacts of drought in front of the decision makers,” David said. “That has to help.”

He said the committee wanted tangible results from the report, in the form of improvements on the investment that both state and federal governments have already made, in grazing, tourism and solar industries, to build the more diversified economic base that the report recommended.

Visiting Longreach in April, Nationals Senator, Barry O’Sullivan called on his government to initiate a fresh round of funding to assist drought-ravaged businesses. 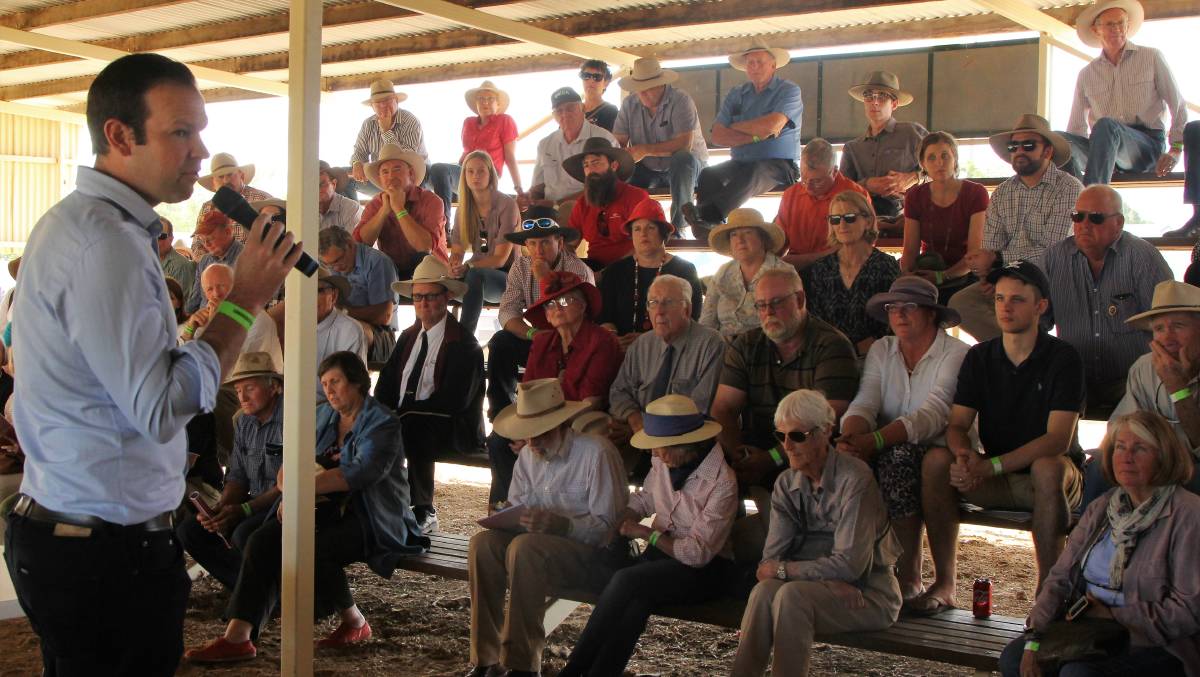 Northern Resources Minister, Matt Canavan, fielded questions on a variety of topics, including water security and the Adani mine, when he spoke at the Longreach Show.

Mr Canavan said Shane had summed the situation up well.

As another person who had spent 17 years living in and around Brisbane, he said there wasn’t a majority of people “out to get” farmers.

“Most people have a huge amount of respect for farmers; there is a lot of goodwill there.

“But Shane made the very justifiable point – there is a lot of ignorance.

“They don't understand the challenges and therefore we have to do more of a heavy lifting job than in the past to educate and inform but also fight for what's important for these areas.

”I'm confident the goodwill is still there, but we've got to do a better job in advocating for it.”

Mr Canavan said while emotion was important in politics and anecdotes did inform, there was nothing like raw numbers to drive home the impact of an event, be it a natural disaster, a drought or any other political issue.

“I've read through the summary and the stats that come out at me are that since 2008, in the central west region, the numbers of kids at primary school have halved in this region.

“That really does hit you because it then raised the question - it's not just about the impact of drought but about the future.

“If there's not many kids at the school, where's the future coming for the central west? We've got to try and respond.”

Mr Canavan said he didn’t have all the answers but remained very committed to helping out, noting that a lot of help had already been provided.

“It was good to see in the report that 80pc of farmers have accessed some form of government assistance.

“I thought that Drought Communities Program worked well but I'd be interested in your thoughts about what we can do to help get through a very difficult situation.” 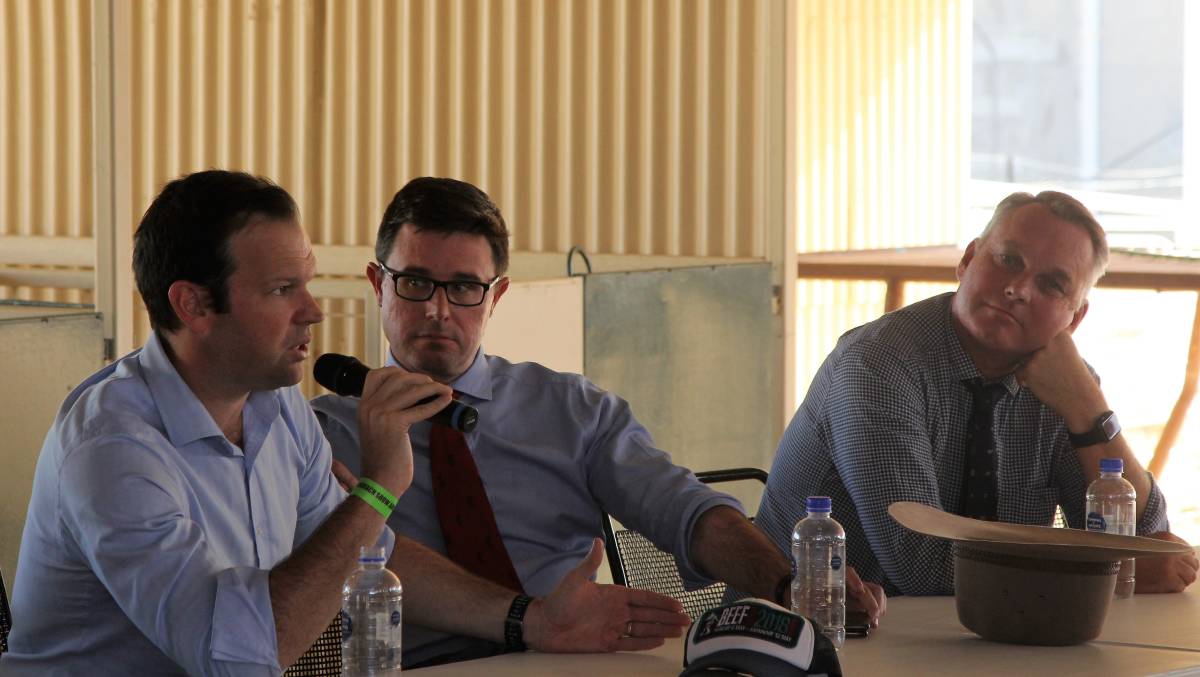 Queensland Senator, Matt Canavan, and federal and state local MPs, David Littleproud and Lachlan Millar, made up a panel at the Longreach Show.

Mr Littleproud agreed that unless people in metropolitan Australia understood their rural counterparts produced the most ethically and environmentally sustainable food and fibre in the world, they were going to get policy settings that weren’t right.

He said while he and his colleague were seen as “redneck Nats from the bush”, agripolitical groups needed to stand up.

“One of the legacies I want to leave as the Agriculture Minister is to make sure that our agripolitical groups have currency, not only in the halls of Canberra but in metropolitan Australia, so they can tell your stories.

“They can sell it loudly and proudly but it's beholden on each and every one of us to go in there and explain exactly how we do it otherwise we are going to get done over again.”

He said the Turnbull government had put over a billion dollars on the table, via the Farm Household Allowance, but more than half the people in Queensland that were eligible hadn’t applied.

He told people not to self-assess their financial circumstances, but to use rural financial counsellors and Centrelink staff, and make use of concessional loans.

The $34m put towards tourism projects – $8m for the Waltzing Matilda Centre and $26.3m for the Qantas Founders Museum and the Hall of Fame – were also pointed out as helping diversify the economic base in the west.

“We're all ears in how we can do it better,” Mr Littleproud said.