While there has been welcome summer rain that has reduced the total area of Queensland that is drought declared, more than half of the state remains in the grips of ongoing drought. 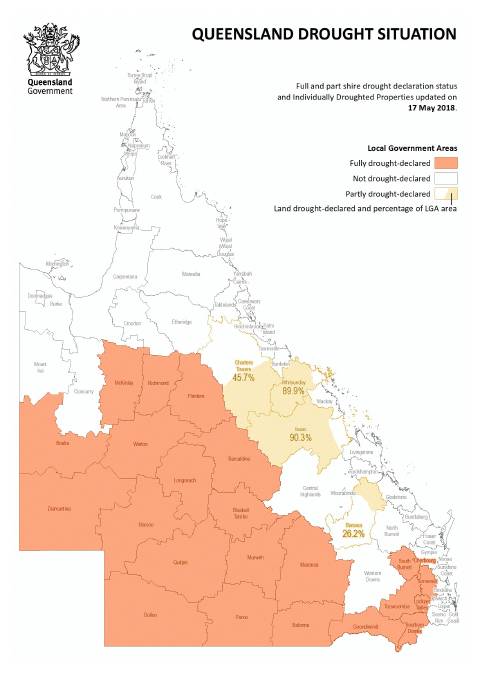 A map showing the drought status of Queensland shires in May 2018.

While there has been welcome summer rain that has reduced the total area of Queensland that is drought declared, more than half of the state remains in the grips of ongoing drought.

Agriculture Minister, Mark Furner, has accepted the recommendations of local drought committees to revoke the drought status of parts of north Queensland, the north Burnett and south east Queensland, while western and southern shires enter their sixth year of drought.

The Southern Downs and Lockyer Valley Regional Councils have rejoined the list of shires in drought after being dropped off last December. 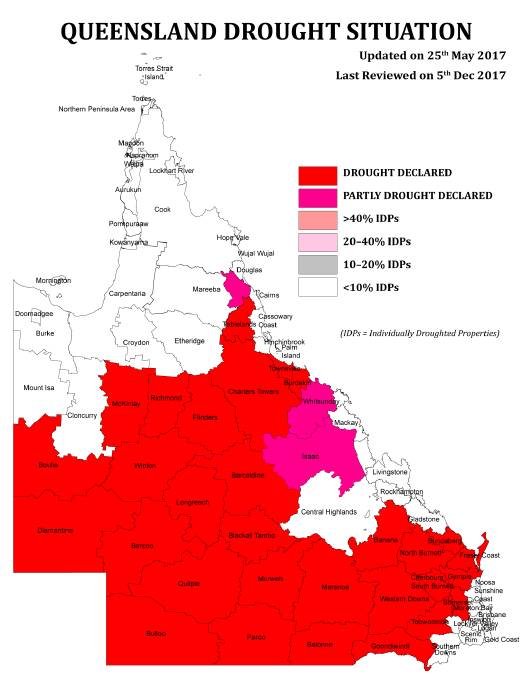 The drought situation in Queensland at the end of 2017.

“At the peak of the drought in March last year, 88 per cent of Queensland was drought declared,” Mr Furner said.

“I’m pleased to announce that falls earlier this year have helped drop the drought declared areas down from more than 66pc to 57pc, with the revocation of eight local government areas and three part-shire revocations.

“I have accepted the recommendations of the local drought committees to revoke these areas.

“I want to stress that any producer who is experiencing difficult conditions in the revoked areas, or in any council area that is not drought declared, can apply for an Individually Droughted Property declaration.

“This gives them the same access to our drought assistance as an area declaration and we will review the 80 IDPs in 10 other council areas that we have in the coming weeks.”

Mr Furner said unfortunately, not all of Queensland had welcome rain.

“During the last 12 months much of southern, central and western Queensland continued to receive below to well below average rainfall,” he said.

“A lack of useful spring and summer rainfall over the last four to five years, combined with above average temperatures, continues to have a major impact in most of pastoral Queensland.

“The last twelve months has also been very dry for the Southern Downs and Lockyer Regional Council areas.

“There are significant concerns about stock, irrigation and rural domestic water supplies, and I have therefore accepted the local drought committee’s recommendations to drought declare these council areas.”

Mr Furner advised producers in any drought-declared area who believed their property conditions were improved enough to allow restocking could have their property individually revoked.

“If their drought declaration is revoked, producers can access returning from agistment and restocking freight subsidies through the Drought Relief Assistance Scheme (DRAS) for up to two years after the end of the drought declaration,” he said.

“However, to be eligible for these subsidies producers must ensure their property’s drought declaration is first revoked before introducing any livestock.”

“Queensland has one of the world’s most demanding environments to undertake agriculture,” Mr Furner said.

“Given our high level of rainfall variability, we want to help producers maximise good conditions and to better manage their resilience for when times are tough.

“DCAP is bringing together the best climate scientists, climate advisers, and cutting-edge researchers in the state, nationally and globally to improve research, training and extension services to help producers better manage drought and climate impacts.”

Updated maps showing the drought status of shires and boundary descriptions and further information on DCAP can be found at www.longpaddock.qld.gov.au.