The Davenport Downs homestead perched on the edge of the Diamantina River flood in mid-March. Photos by Ross Myhill.

The Channel Country is living up to its name at Davenport Downs south west of Winton as the Diamantina River flood spreads across Queensland's largest cattle station.

Road closures and food shortages were the centre of attention recently when up to 200mm of rain fell in parts of the north west, but the floodwaters from the Western and Diamantina Rivers are now giving parts of the Channel Country a much-needed drink.

One of those places is Davenport Downs, 350km south west of Winton, Queensland’s largest cattle station.

The fattening operation was purchased by Paraway Pastoral Co in 2009 and the adjacent property, Springvale was added in 2011, forming a 1.5 million hectare aggregation that has the capacity to carry around 25,000 head.

Ross and Carlea Myhill began managing Davenport Downs in January 2016, coming across from another Paraway property at Blackall, and experienced an extraordinary year in terms of rainfall and flooding.

Carlea said they received 421mm of rainfall (207mm is the annual average) and recorded four or five separate floods that year.

“It was an unusual but great year,” she said. “By late September, we could finally get around, and the crew cracked into the mustering.

“The cattle had done really well on the feed that had grown throughout the year and we trucked out a lot of fat bullocks.

“That turned into a pretty average 2017 with no beneficial rainfall in the growing season, but we were able to hold onto cattle longer as we’d had such a good season the year before.

“2018 was looking the same until the latest weather change earlier in this month.”

Queensland Country Life asked Carlea what March’s rain and flooding would mean for them. 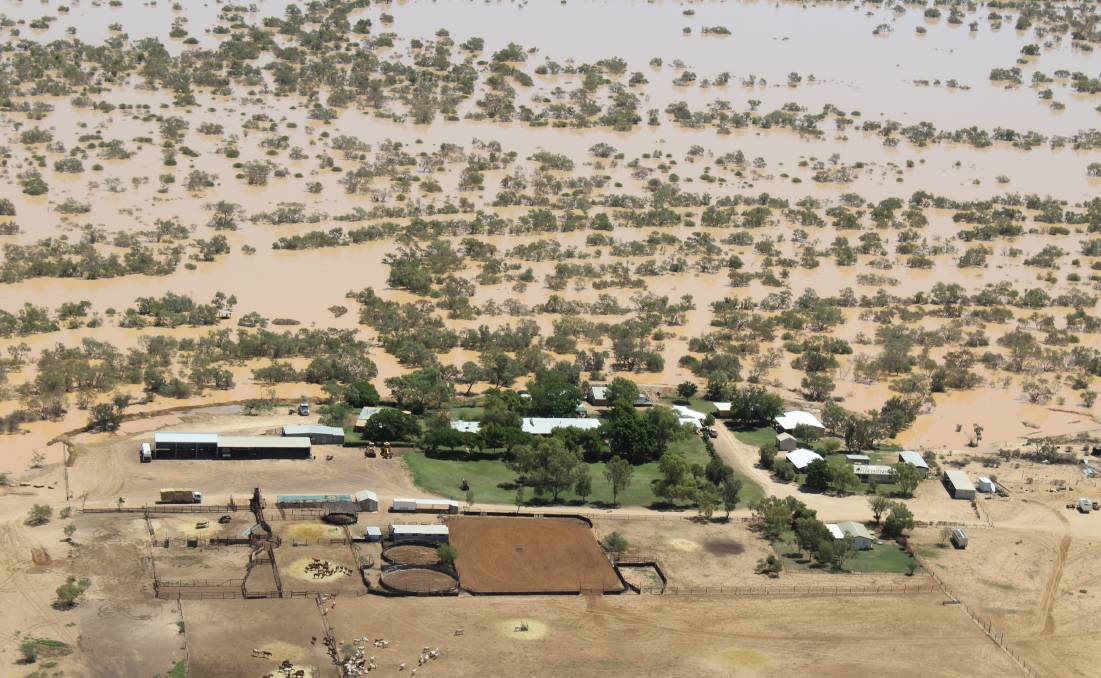 A closer aerial view of the floodwater at the Davenport Downs homestead, which was held back with a levee bank.

Q: How big was the Diamantina River flood in comparison to others experienced at Davenport Downs?

The Diamantina River runs through the western portion of Davenport Downs. It runs from our northern boundary on Davenport right through to the southern boundary, some 90km in length. In places the channels are anywhere from 7km to 28km wide along the length of the river. The area the channels covers is around 115,000ha (8 per cent of Davenport).

We use the river height data from the Diamantina Lakes National Park to the north of us as a gauge for the flooding events and this year’s flood peaked at 6.93m, which was the highest recorded flood since 1999 according to BOM records (1999 was 7.15m and 2000 reached 6.83m).  Every flood is so different in the Channel Country.

From the rainfall received to the north and further up around Kynuna and Winton, where the big falls were, we were preparing for a flood equivalent to the 1999/2000 floods, or possibly larger. From speaking to people who were here at that time, we were expecting the water to encroach into the homestead complex, but we just couldn’t predict how far up it would come. We decided to spend a few days with the loader building a levee bank around the back of the homestead complex ‘just in case’. The levee bank definitely saved the school room, pump shed and a few animal enclosures from being flood damaged, but other than that, the water didn’t go as high as we anticipated. The levee sprang a few leaks, and we had to add to it around the workshop areas, but overall it did what it was intended to do. In terms of comparisons, I think the water level would have been similar to that of 2000 had we not have built the levee.

We’ve got some creeks that run into the Diamantina and they’d had rainfall over them in the same weather change, so the local rainfall over them had already run water into the Diamantina and filled a lot of waterholes before the main water from up north arrived. This meant that once the Kynuna/Winton/Corfield water arrived, all it had to do was flood-out. The water arrived and rose almost 2m in less than 24 hours. The local rainfall had allowed our creeks to flood out, and ran water into the Diamantina fairly quickly. Had the local creeks still been in flood when the big waters arrived, the flooding would have been a lot more as the creek and river waters would have joined up. Ross Myhill has been able to gauge the scope of the Diamantina River flood from his plane.

Q: Did it do any damage or has it all been beneficial?

The flood water peaked at the homestead on Monday, March 12. Within around five days it had travelled the length of the river through to our southern boundary. It was quite fast. The water is still up and out of the banks and is gradually receding. We envisage it will be a week or so until we see it back into the banks of the channels. Where water only laid for a few days on the edges of the floodwaters the response has been good. Once the floodwaters recede more we will be able to see the true benefit the water has made to the likely growth. If water lays for too long, it could spoil the feed that has started to grow underneath, but we’ll have to wait and see.

Q: How much flood-out country have you got? Did it all get a drink?

Taking into account the three major channels and creeks on Davenport (Diamantina, Farrahs Creek and Spring Creek) we’ve got around 20pc flood-out country on Davenport. There are a few other creeks on Davenport that flood out also but that’s usually from local rainfall, not flooding from the Diamantina. The flood earlier this month was a major one.

The flood is still up and out of the banks almost the entire 90km length of the river on Davenport. It’ll be a good week or two until it’s back within its banks and we can fully gauge how beneficial it’s going to be for the year ahead. We originally thought we were in for a fairly accelerated sales program early in the year, coming into what looked to be another dry year, but a simple change in the weather altered everything. We are certain that the floodwaters will benefit the stock we currently have, and time will tell whether we can run additional cattle depending on the growth that we are hoping for after the water recedes.

Our stock camp was flat out during February, mustering and trucking cattle off, so the change in pace brought about by rain and subsequent flooding has certainly picked up all of our spirits with the optimism of what lays ahead for 2018. It’s amazing what the Channel Country is capable of. The typical braided channels and flood-out country that the Channel Country is so well known for.

Q: How much rain did you record at Davenport out of this last change?

The last change brought about some isolated rainfall across Davenport and Springvale (the outstation). The Springvale house recorded upwards of 90mm of rainfall over a week, and that extended into the northern section of Springvale. Around 75pc of Springvale received rain, with less rain being received the further south you go. At the Davenport house, we recorded 30.8mm over three falls. Outside of the homestead areas, one camp we have, which is around 100km south-south east of the house, measured 38mm the night before we were due to truck out. The north eastern side of Davenport received rain, as did the southern boundary and parts of the south eastern side. On Davenport from the air you can see that there has been rain in parts, and a green pick has come up so it’s definitely welcomed but the rainfall alone won’t give the growth response needed to turn the season around unless follow up is received. Overall, approximately 40pc of Davenport (including Springvale) received actual rainfall.

Q: How badly was rain needed?

Davenport has an annual rainfall average of around 207mm (8.2”) so getting widespread rainfall across the whole of property is fairly unusual. The Channel Country relies heavily on flood events to alter a season’s outlook. The rainfall received to the north east of us up around Kynuna and Winton in early March definitely turned the season around, providing a major flood. In 2017 we missed out on a useful flood as well as any decent rainfall on the outside country.  We had gone into the end of 2017 having reduced our stock numbers, and had already substantially reduced numbers throughout February this year. The year wasn’t looking very favourable considering the feed and water reserves were getting lower. In 2017, we received around 60pc of our annual rainfall however it fell in smaller amounts throughout the year. The rain that did fall earlier in the year was followed by extremely high temperatures and no follow-up so there essentially was no growing season in 2017 and we thought we were going to have a repeat this year.

Q: Has the latest lot of rain made much difference?

Our outstation Springvale, which had upwards of 90mm rainfall over the space of a week, has definitely had a good response to the rainfall.  Springvale doesn’t rely on much flood-out country and has only one major creek that floods (Spring Creek). It does not benefit from the floods in the Diamantina River. Most of Springvale is within the Diamantina catchment, so the runoff does end up in the Diamantina. We had put two crews into Springvale in early February to muster and sell cattle, and reduce our cattle numbers dramatically. Luckily for us, the last of the trucks rolled out a few days before the rain set in. With the rain that fell at Springvale, and with reduced cattle numbers, it’ll give the grass a good chance to grow.

The actual paddock rainfall on Davenport will unlikely make a huge impact to the overall numbers we will stock on the outside country this year. Where water has laid, in creeks and gullies, the response is great, but outside of those areas, you probably couldn’t tell it’d had much rain on it at all. We’re fortunate enough that as well as the Diamantina, we’ve also got the Farrah’s Creek that runs on our eastern side, some 80km long, one to 16km wide in parts. It’s definitely not as dramatic as the Diamantina when it floods, but it does give some good areas of growth to rely on in that eastern side. We had received some good rain before the last change on parts of that south eastern side, so the added rainfall and subsequent flood in the Farrah’s will mean good growth in those areas.  The area known as the Farrah’s occupies around 58,000 hectares (4pc of the total property).