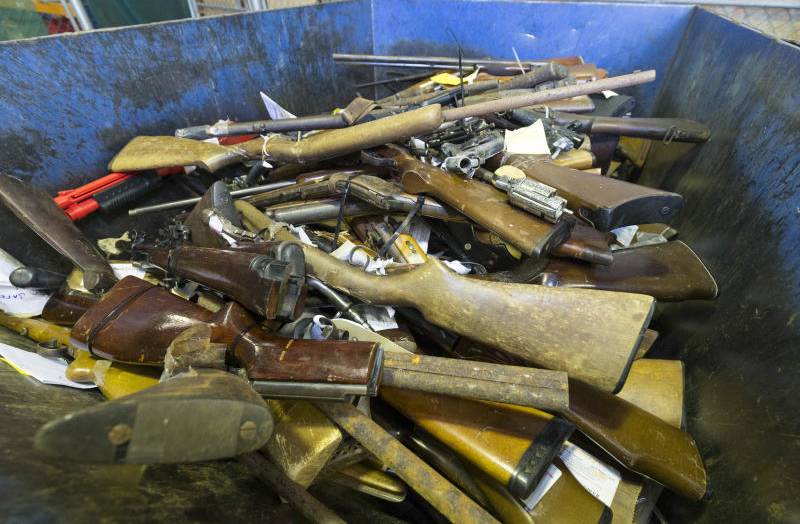 The results of an ongoing statewide operation focused on the safety of Queenslanders and a reduction of illegal firearms, Brisbane, Monday, February 26. (AAP image/Glenn Hunt)

News that gun theft in Queensland was declining was welcome but probably would have happened anyway, according to Shooters Union Australia president, Graham Park.

This week’s media releases from the state government on declining levels of gun theft in Queensland should be taken with a grain of salt, according to Shooters Union Australia president, Graham Park.

While congratulating Queensland Police on the decrease, the best in four years, he said the job was far from over because penalties were not harsh enough.

“The Shooters Union thinks gun thefts could be halved over the next five years by legislating to ensure people are prosecuted and given severe penalties. Simply, if you steal a gun, you should go to jail,” he said.

Mr Park quoted an instance where One Nation president, Jim Savage, had legally registered firearms and valuables stolen from a safe in 2009 that were recovered by Victorian Police late last year after they’d been sold interstate to a drug dealer.

Mr Savage was told the offence was “too minor” to extradite the perpetrators to Queensland, and said they were let go with no consequences.

“When the government tries to toughen up on gun crime, the impacts are not felt by criminals, but by the law-abiding firearms owners who have been doing the right thing.

“We call on the Palaszczuk government to keep building momentum by implementing far harsher penalties for anyone who steals a gun.”

Three people were arrested on Wednesday over the alleged theft of nine rifles from a locked gun safe at a St George property on Australia Day.

Opposition police spokesman, Trevor Watts, said it was part of their policy platform at the last state election, reinforcing their approach to cracking down on criminal behaviour.

“Queensland currently has some of the weakest penalties in Australia in relation to stealing or theft of a firearm,” he said.

“We increased penalties for gun crime when we were last in government, including mandatory jail time for unlawful supply, trafficking and unlawful possession of a firearm.

“Our hard working police need tougher powers to crack down on these criminals.”

Responding to news that almost 900 firearms were seized in Queensland in February, in the lead-up to the Commonwealth Games, Mr Park suggested a lot had been handed in voluntarily, as an ongoing consequence of last year’s national amnesty.

“It’s not a bad thing they’re gone but I’m not convinced this is keeping us safer,” he said. “If there was a continuing amnesty, there would be a continual reduction in numbers, because people would feel it was safer to turn their firearms in.”

Positive action already undertaken to tighten up police access to firearm ownership lists, described as a “shopping list”, was acknowledged by Mr Park.

He said media reports showed an increasing number of police and public servants dismissed and prosecuted for leaking sensitive government information in recent years, which he said coincided with lower gun theft numbers.

“I’m not suggesting any particular officer accessed or released information about firearm licence holders’ addresses and security arrangements, but where there’s four apparently quite different officers, of different ages and locations, who can be found from two minutes of googling, there are likely to be more.”

He said the Shooters Union opposed the registration of category A and B firearms on farms, partly because it duplicated information already available, and partly because of the constant danger of the information falling into the wrong hands.