He's the man of the moment in the Australian beef industry, but Brett Nobbs is not one to want to sit down to speak about himself. But his story is worth being told. Photo - Kelly Butterworth.

Brett Nobbs had a business mind from the age of 11 when he started selling wool to local spinning clubs to fund his stud cattle dream.

Brett Nobbs was 11 when he started shearing his own sheep and selling the wool to the local spinning clubs.

It was the start of a business mind that would eventually see the young man become a game changer in the stud cattle game.

At home at Inverrio, Duaringa, Brett, 48, is clearly uneasy speaking about himself instead of his cattle, but he tells his story as that of humble beginnings He was 13 when the profits of the wool business allowed him to purchase his first stud cattle and just two years later he made his debut selling at the Droughtmaster National Sale.

But the bull didn’t receive a single bid and it was from that moment he swore he would never let it happen again. Fast forward 33 years and Brett watched on from the ring of his own selling complex as buyers struggled to put in a bid as NCC Justified sold for an Australian All Breeds Record of $325,000. The light show from the NCC global genetics sale was astounding against the Rockhampton sunset. Photo - Kelly Butterworth.

He is renowned not only as one of the best Brahman stud breeders but for his marketing skills that the beef industry hasn’t been exposed to.

The NCC Global Genetics Sale at the International Brahman Congress stands out as one of his best.

There was a re-planted bottle tree, eight piece band, 8000 branded NCC cups and a rotating selling ring, all from the mind of the man himself.

A little spiral notebook sits on his bedside table, ready to scribble down his creative strokes of genius in the middle of the night.

“People warm to a little bit of flair and attention to detail and I guess it’s just a bit of my artistic side that comes out and I like to mix that up with the cattle,” he said. ​

As the bidding inched past $200,000 for NCC Justified, a “little tear” escaped before he turned numb listening to the bidding war. 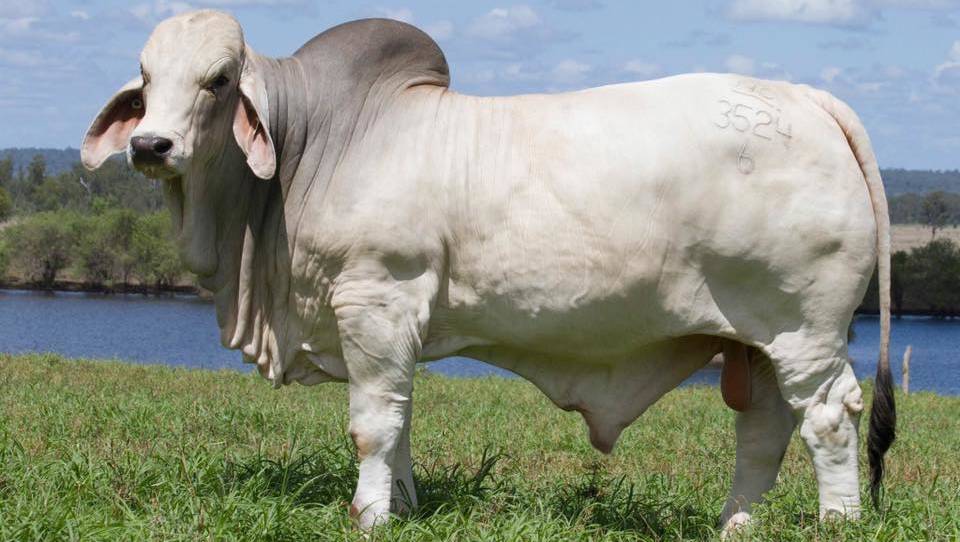 “It was a little surreal,” he said. “I was focused on the animal and making sure he’s doing what he’s supposed to do and looking the part, and I guess when it got to about just over $200,000 I had a little bit of a tear there for a fleeting moment.”

He said knowing people would spend that much on one of his bulls was an incredibly humbling experience. “It wasn’t so much just him - it was the whole sale… to have that depth of bidding and that number of people here, and just all being in such a positive frame of mind and really embracing current industry confidence, and confidence in the NCC product.” Brett had the entire industry talking when he purchased Simmental bull Woonallee Los Angeles L124 (P) (ET) (AI) for a record breaking $160,000 in February this year. The decision to pursue another breed came after witnessing the closure of the live export a few years ago and the major impact it had on the beef industry so unexpectedly.

Having identified a particular type of Simmental, mainly of South African decent, he said he was focused on breeding an animal adaptable to the Queensland climate. “I guess more than anything it’s just the extra challenge of another breed… I get bored quite easily and I like to challenge myself and I just see a challenge there in breeding good Simmental cattle,” Brett said. “They’re a breed that I had a bit of exposure to as a kid and I really enjoyed Simmental cattle, and I’ve thoroughly enjoyed the process so far in the last two-and-a-half years with a herd of Simmental cattle.” Brett plans to sell about 150 Simmental bulls in 2019 but said the new breed wouldn’t jeopardise their Brahman business.

“They’ll always be the backbone of my business,” he said. “I love the breed and I love the people within the breed, the camaraderie and the friendships I’ve formed breeding bulls all over the world has just been tremendous and it’s a lifelong commitment to breeding Brahmans, and now hopefully Simmentals as well into the future.” There’s hardly a Brahman sale in Queensland where you won’t hear the name Elmo (JDH Mr Elmo Manso 309/4) and many would be surprised to know he caught Brett’s eye with only a photo the size of a postage stamp in an American Brahman journal. Brett said when he was looking through the show results, he saw the yearling bull, and knew he was the one he had to have.

It took a year following Elmo’s success and making many phone calls before Brett flew over to America when the bull was a rising two year old and secured him in 2009. ​​​ While Elmo has since died, his influence on the breed is undeniable; with his bloodlines strongly present in the marketplace.

“I was 100 per cent sure that he was just so far out of the box, as far as, in my eyes, the type of cattle that I’m trying to breed and he suited my program down to the ground,” Brett said. “His docility, and his ability to throw it on generation after generation has been phenomenal for Brahman cattle - they’re the quietest Brahmans you’ll ever come across. “That was something that was unexpected from a photo when you’re buying a bull for his physical attributes.

“It’s just that explosive growth, depth of fleshing, softness and easy doing that he had and the bone that he produces has just made him streaks ahead of any other bull that we’ve used.​” BRETT OUTSIDE OF NCC

So what does Brett Nobbs do when he isn’t selling, buying or breeding cattle? Not a lot. He doesn’t have a need to keep up hobbies outside of the business.

Surprisingly, sales and marketing are Brett’s least favourite parts of the process. “I’m very fortunate in the fact that I don’t have to have a hobby outside, or an outside interest in anything because I’m fortunate enough to love what I do, it’s my work, my business, and my hobby and my passion all wrapped into one so I don’t really desire to do too much else,” he said. Running alongside his parents Allen and Carolynne Nobbs, Brett said the business is very much a team effort.

He handles the cattle side while his father takes care of the property development and his mum does the bookwork and accounts. The sun sets on the sale ring. Photo - Kelly Butterworth.

After the record sale this year, Brett said he was aware next year could be a tougher sell after regular buyers missed out on bulls due to the high prices.

As a result he is aiming to offer 50 per cent more bulls next year, to offer affordable bulls for those clients. “Record prices and record averages are beyond my control, I’m only interested in breeding a quality line of cattle for the market,” he said. “I guess I’m just trying to increase my numbers, make them more affordable and get more bulls out into the market place.”