It started with a hay run. Now Brendan Farrell's drought-busting charity efforts have turned to ... a golf shed. 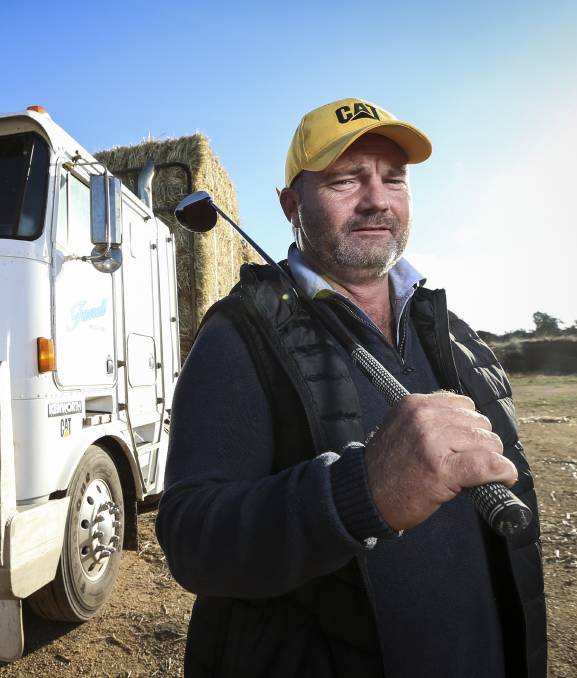 Brendan Farrell admits he felt “a bit fuzzy on the inside” after a generous donation to finalise his golf shed project for drought-stricken farmers in remote Queensland.

The Burrumbuttock Hay Runners organiser sent out an urgent SOS at the start of June, saying he had only $1600 of the $10,000 needed to fulfil his promise to the Muttaburra community.

He had teed off on a fundraising project to spruce up the town’s dilapidated golf shed after a recent hay run north.

At the time Mr Farrell said the golf course was just about the only “social interaction” left for struggling farmers.

But on June 1 he posted a video on Facebook saying he been racking his brains to find a way to keep his word.

“If I have to fund it myself with a personal loan, well so be it,” he said.

Then on Thursday, Mr Farrell received a call from a “local bloke” who asked how much was still needed to make the golf shed a reality.

“He donated the balance of $6395 and to shell out that type of money, well … yeah it makes you feel a bit fuzzy on the inside,” he said.

Mr Farrell, who announced the next hay run would be in January 2018, said the focus was now on getting the shed up.

“Ideally what I’d like to do is give the golf club the money and organise a working bee over a month to get it built,” he said.

“I think it would be a better way to do things –  farmers can come together, talk to each other and think about something else beside the drought.”

While he’s up there, Mr Farrell said he also planned to unload a bunker of 120 tonnes of grain because the drought was still biting hard.

“It hasn’t rained at all up there – at Muttaburra, Longreach, Ilfracombe and Blackall,” he said.

It hasn’t rained at all up there ... our crops are stinging for a bit of rain too. - Brendan Farrell

“We have to keep pushing that point home.

That’s why Mr Farrell said it was imperative to keep raising money and he’s got a few projects in the pipeline.

But without the generosity of everyday Australians he said he wouldn’t be able to keep the help – and hope – rolling in.