Gearing up: Mark Fegan has been breeding up his cattle numbers and hopes to have 2000 head on Penola Downs by the end of the year. He said he'd thought about buying stock but the prices put him off. Picture: Sally Cripps.

McKinlay grazier Mark Fegan looks back on the horror year of 2013, when the drought was at its height.

It was early March 2013 – Mark Fegan had just ordered another 50 tonnes of molasses for his cows and calves at Penola, south east of McKinlay, after recording only 8mm of rain for summer.

At the time he was feeling confident, saying his situation “won’t be as bad as 2008, when we were nearly totally destocked, but we really need something in the Gulf to come down this way to fill our dams”.

That “something” didn’t come and 2013 turned out to be much worse than 2008, something Mark can laugh about in hindsight. 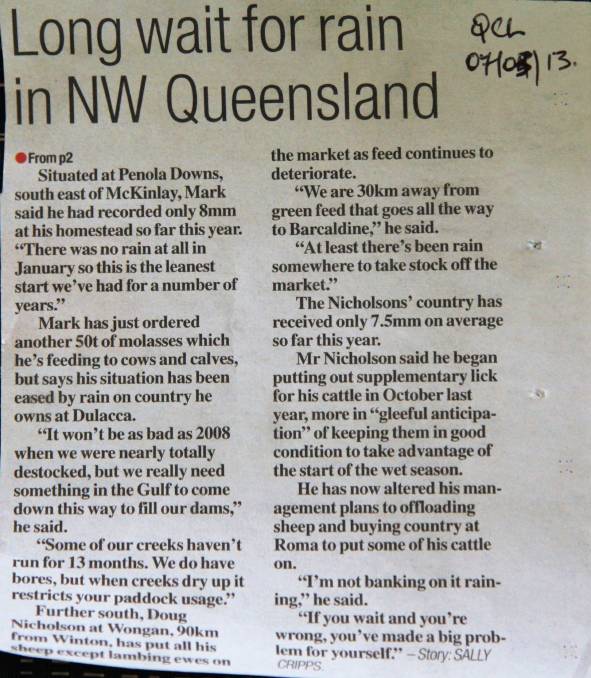 The QCL article of 2013, before the full horror of the year ahead was known.

“It turned out to be the worst year I can remember since being here. I finished senior in 1981 and I’ve been here ever since.

“We’ve had bad years but 2013 was the worst because it was statewide. We’d always had somewhere to go in the past.”

The rest of the year saw triple road trains coming down from the Atherton Tableland loaded with hay, and an eight tonne body truck going out into the paddocks every day with big bales of hay for cows and calves.

He’d bought a block of land at Dulacca but couldn’t get his stock in good enough condition to move them.

It was rain that got him and his Droughtmaster herd through, when 175mm fell “just right” in February 2014 to grow grass. Rain now would be spoiling for Mark Fegan at McKinlay.

“In March last year I was thinking, you’ve got to be joking, here we go again,” he said.

Relief came, and although all it grew was weed, the winter rain that followed grew Mitchell grass with “the biggest seed stalks” Mark had ever seen.

He ended up with 175mm over three months, and 250mm in January this year, although places further south have had much less.

Mark took up clay target shooting in early 2013 and said that if he hadn’t done that, he mightn’t be here today.

“Driving to shoots, I was seeing how bad it was in other places. I’d been there; I knew what they were going through.”

With daughter Jacqui, 22, starting as a governess at Aramac shortly and son Wesley, 24, at home, Mark said he had plenty to look forward to. The outlook at Penola Downs is many times more positive than it was four years ago.