The drought status of shires in the north of the state and the Southern Downs has been revoked after recommendations from local drought committees. 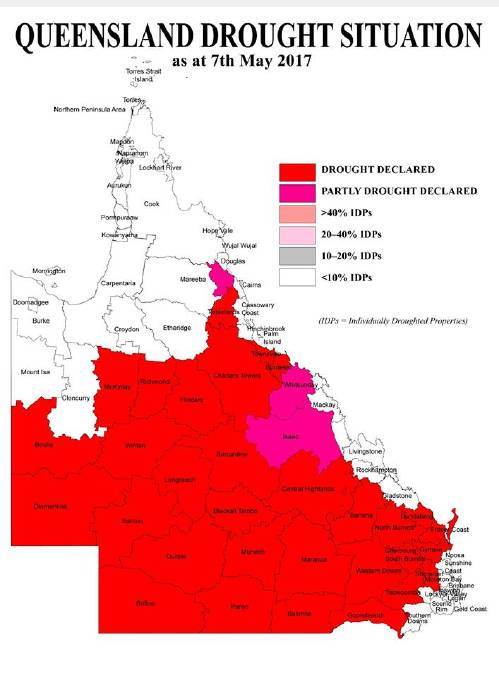 The drought status of shires in the north of the state and the Southern Downs has been revoked after recommendations from Local Drought Committees.

Agriculture Minister Bill Byrne said he had accepted recommendations for revocations in nine shires and two part shires, reducing the drought declared area of Queensland from a record 87.47 per cent to 69.75pc.

“There is no doubt much of our state remains in the grip of a prolonged drought,” the minister said.

“Overall, Queensland endured another harsh summer of well below average rainfall and above average temperatures.

“The main exception was in parts of the Gulf and the north where there was a normal monsoon season and summer rainfall.

“I am advised that rivers, streams and watercourses had good flows to replenish property dams and waterholes, and pasture growth has been very good with most areas carrying a good body of feed into winter.

“I am also revoking the declared sections of Cook and Mareeba effective as of May 1, while in the south east I have accepted the recommendation to revoke Southern Downs effective as of April 19.

“I am awaiting further advice from local drought committees in the Central Highlands and in the south east where there was heavy rainfall associated with Severe Tropical Cyclone Debbie.

“Committees there will review conditions to see if there is enough pasture to get them through to the next wet season and I expect to receive their recommendations in the coming weeks.”

Minister Byrne said in the revoked shires the drought-enforced movement of livestock out of the area had ceased and producers had started to rebuild their breeding herds.

“Producers in those areas who are still experiencing difficult conditions can apply for an Individually Droughted Property Declaration (IDP) which gives them the same access to Queensland government drought assistance as an area declaration,” he said.

“They will then be able to access returning from agistment and restocking freight subsidies through the Drought Relief Assistance Scheme (DRAS) for up to two years after the end of the drought declaration.

Updated maps showing the drought status of shires and boundary descriptions can be found at www.longpaddock.qld.gov.au