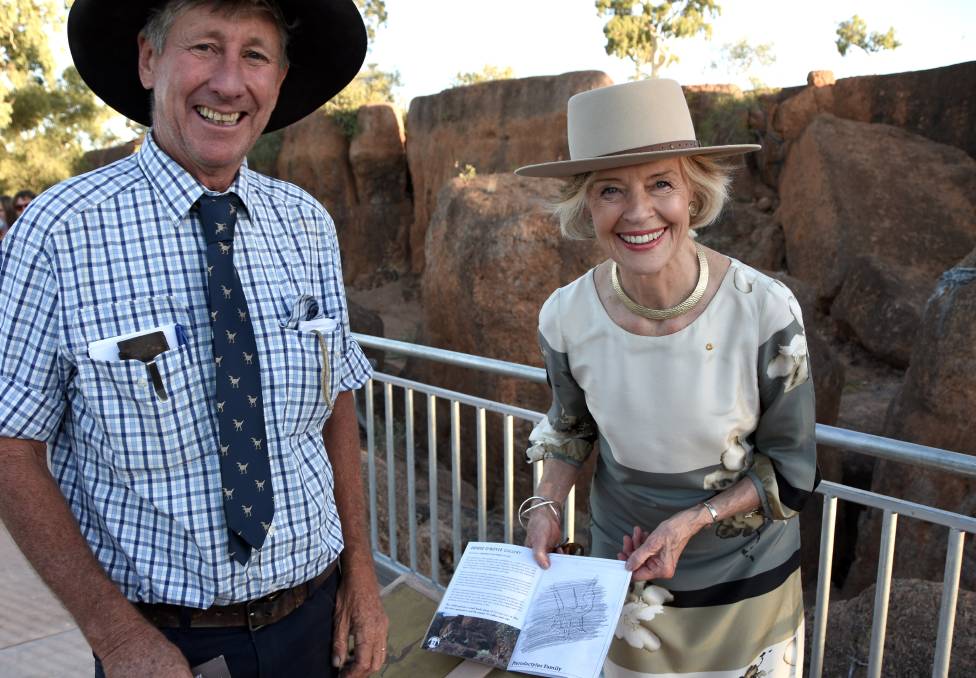 The opening of Australia’s latest paleo-tourism offering is expected to boost international tourism in western Queensland.

The new attraction consists of a spectacular building perched on a cliff overlooking a 300 metre elevated concrete pathway through a gorge, along which five outdoor dinosaur galleries have been positioned.

“Dinosaur Canyon is different to anything else out there,” Winton Shire Council mayor, Butch Lenton, said.

“The galleries throughout Dinosaur Canyon contain life-size bronze reconstructions of dinosaurs that lived in Australia over 95 million years ago.

“This is an exciting new addition to tourism in western Queensland and a great drawcard for Winton.”

Dame Quentin, who is the museum’s patron, said the opening of the first phase of stage three of the museum’s development was a great achievement for Queensland and Winton.

“It has the potential to become Australia’s foremost natural history, education and research facility and will be a fascinating place for future generations to enjoy and cherish,” she said, conducting the opening before a crowd of 150 people.

According to museum founder and AAOD executive chairman, David Elliott, the most important role of the Dinosaur Canyon project was to interpret the museum’s fossil discoveries and research.

It has amassed Australia’s most comprehensive collection of large dinosaur bones in little more than a decade.

“From a scientific point of view, it’s outstanding,” he said. “However, from a regional economy point of view, it is imperative that we interpret these discoveries into a popular tourism product.”

The attraction resembles a treetop walk as it winds throughout massive boulders and thick vegetation, recreating life as it would have appeared during the Cretaceous Period, showcasing a dinosaur stampede, the Pterodactylus family, Kunbarrasaurus ieversi, Death in the Billabong, and the Valley of the Cycads. 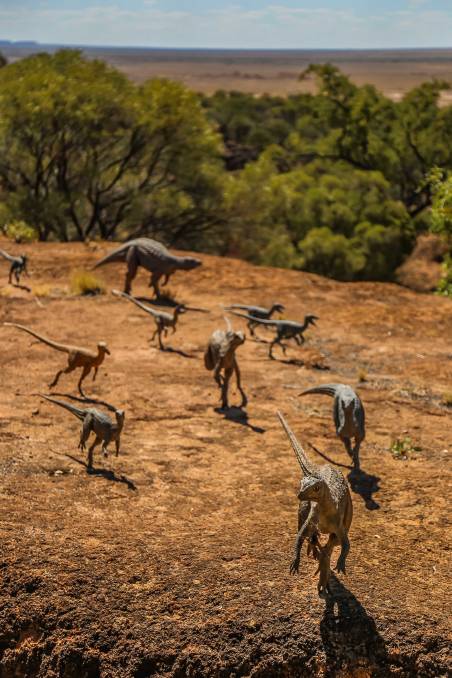 The dinosaur stampede gives visitors a thrilling experience of what could have happened in the landscape millions of years ago.

It was made possible through a combination of government funds, private sponsorship and the museum’s contributions from operating funds.

David and family managed the project and were stationed onsite from March 2016.

He said it was a relief to finally get it finished.

“Now that we have public infrastructure and a critical mass of attractions at Dinosaur Canyon, it will be relatively easy to add new exhibits and expand our tourist offering over time without such a high monetary outlay,” he said.

“We’ve been working non-stop to get this finished and we are finally there.

“It’s almost like, you’ve gone over the hill to the other side and now you can finally see the big picture of where it is going.”

The idea of an Australian natural history museum began following David's chance discovery of a giant sauropod femur in 1999.

Commencing in 2012 the not-for-profit Australian Age of Dinosaurs Museum was stationed in a makeshift fossil preparation laboratory in a shed on the Elliott’s property until 2009 when it moved to the new, purpose-built science and tourism operation located on a 1400 hectare mesa 24km south east of Winton.

Until now, the museum has included a fossil preparation laboratory, and a multi-award winning reception centre and fossil holotype room.

The third stage of construction, which started with Dinosaur Canyon, will conclude with the construction of the AAOD Museum. 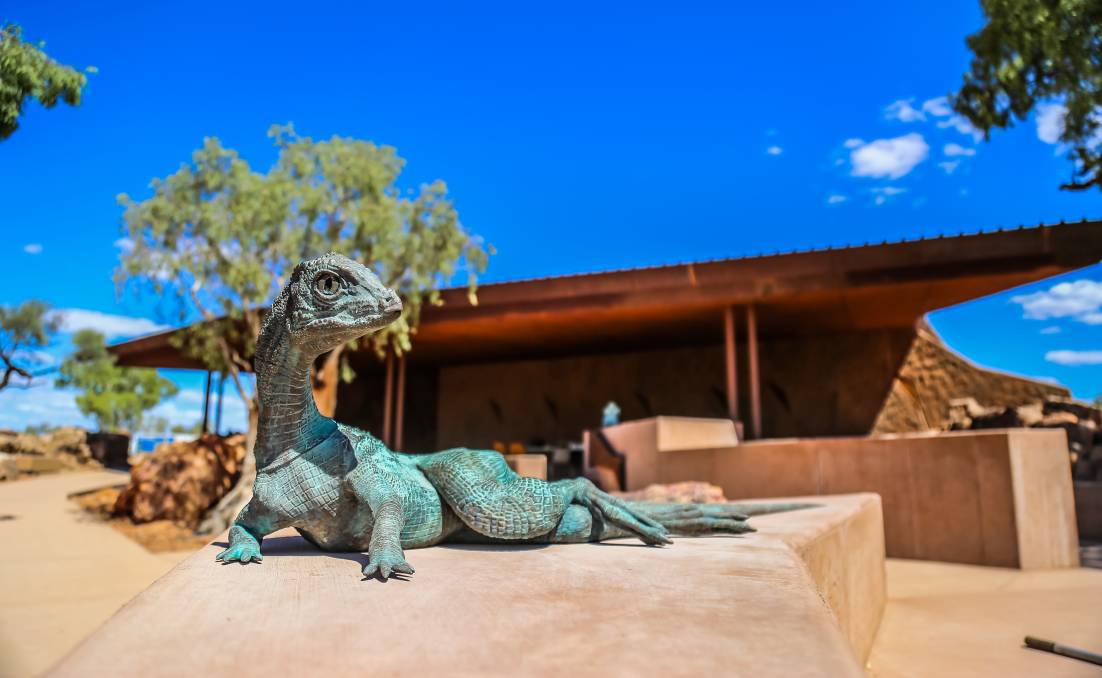 The outpost, designed by Cox Rayner Architects (now Cox Architecture), blends into the surrounding environment and features rock-textured walls that appear to rise up from a belt of ironstone ridges. The building has two toilets, cold drinking water and beautifully crafted concrete seating with display plinths and a school seating area.

…before walking down into the gully at the edge of a billabong, the resting place of a large, dead sauropod.

The Macmillan Littlewood Gallery features the  Death in the Billabong exhibit, a glimpse into how dinosaur bones became preserved and the effect of the environment on preservation shortly after death. 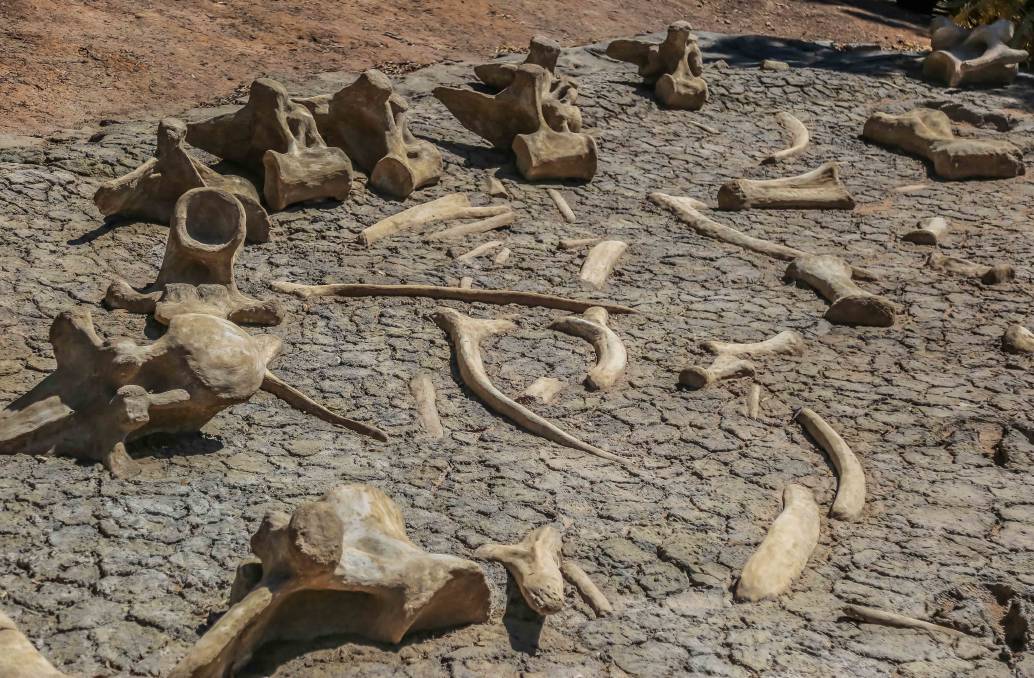 The realistic depiction of dinosaur bones becoming preserved in the Winton Formation shows a sauropod carcase scattered amongst footprints of other long-necked dinosaurs and scavengers.

Turning a corner, the tops of several large canopies can be seen above an enclosed valley, created with giant cycads, relatives to similar Cretaceous species that existed in the area millions of years ago.

A short distance on, a small family of pterosaurs sits precariously atop a giant boulder. 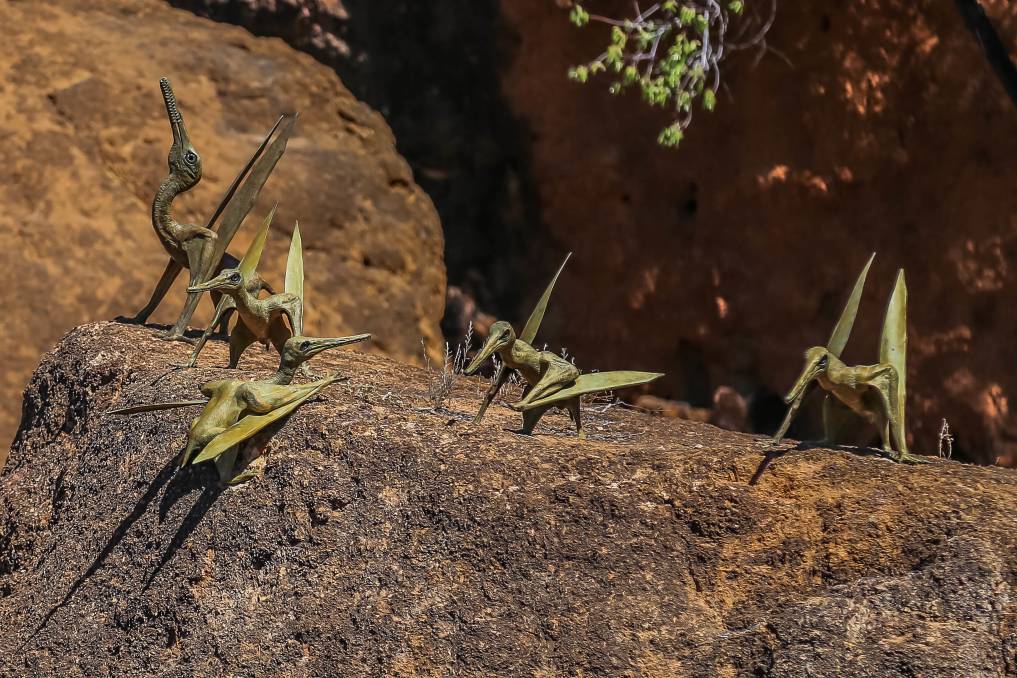 The life-sized flying reptiles, members of the Pterodactylus family, in the Denise O'Boyle Gallery give an insight into prehistoric Australia’s vast array of prehistoric animals aside from dinosaurs.

Then, walking up a small ramp, there’s a terrifying encounter between a five-metre long theropod and 24 small dinosaurs that has been frozen in time, in the Wavish family gallery, featuring the Dinosaur Stampede exhibit.

Based on the fossilised footprints preserved at the Dinosaur Stampede National Monument in the Lark Quarry Conservation Park, 110km south-west of Winton, this exhibit is action-packed.

At the end of the pathway three armoured dinosaurs, Kunbarrasaurus ieversi, relax beneath the shade of a tree in the John Villiers Gallery. 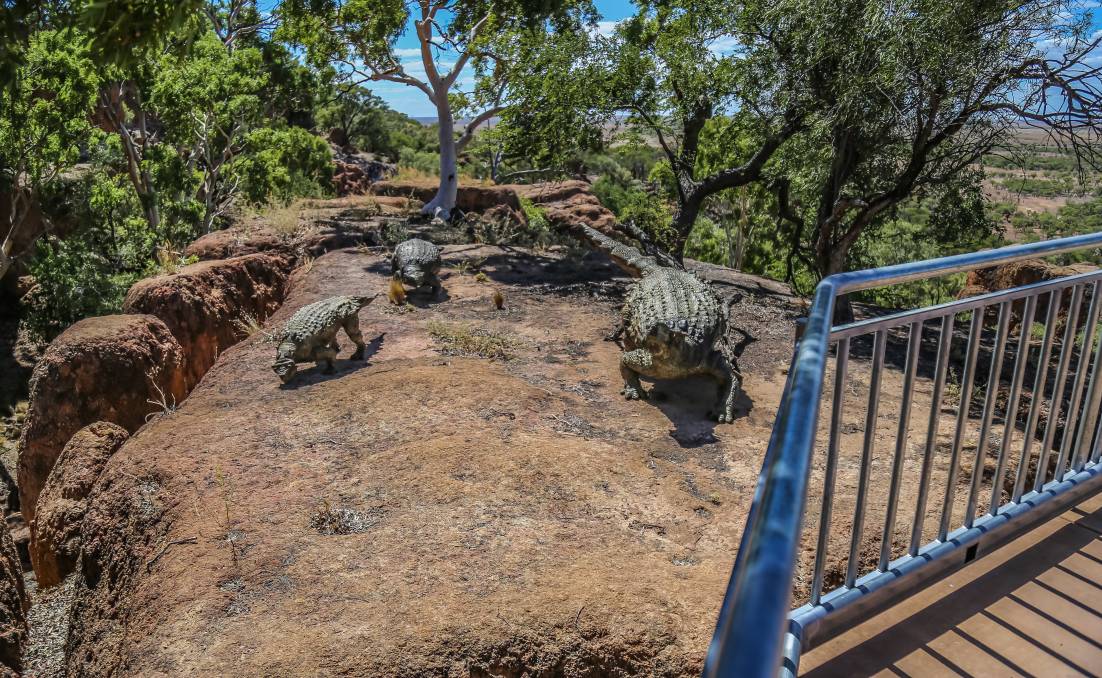 The outdoor gallery featuring three dinosaurs based on the original skeleton of Kunbarrasaurus discovered in Richmond in 1989. These models provide an insight into herd animals and the defence mechanisms necessary to live in Australia millions of years ago.

Guided tours of Dinosaur Canyon begin from the reception centre and include return transfers via the Noble Express shuttle.

Following a brief tour of the galleries by a museum guide, visitors will be able to enjoy the views, collect unique dinosaur tracings from each exhibit plaque using the Dinosaur Canyon visitor guide book or sit down and listen to the free audio guide.

The Elliott family and museum staff will now start work on a second phase of preliminary infrastructure and consolidation before embarking on the delivery of the 6000 square metre main museum building.

It will house education, research and tourism facilities, along with world-class dinosaur exhibits, fossils, minerals and interpretations representing the evolution of life in Australia.

“It will tell the story of the Australian continent, presenting its 4.5-billion-year geological journey through deep time as a special part of the heritage of all Australians,” David said.