Giving: Signs of thanks flutter from a Muttaburra fence. Droughted recipients say the physical presence of trucks and drivers means as much as cash. Photos: Sally Cripps.

The latest visit to western Queensland by the Burrumbuttock Hay Runners has reignited the debate over whether money should be spent on carting hay or whether it would be serve a better purpose given as cash.

The latest visit to western Queensland by the Burrumbuttock Hay Runners has reignited the debate over whether money should be spent on carting hay or whether it would be serve a better purpose given as cash.

Last April, some Longreach businesses caused an uproar when they said the world’s biggest hay relief effort and associated giving of produce and services had impacted on their business.

It resulted in a public meeting in Ilfracombe, attended by what Hay Runners founder Brendan Farrell described as 80 supportive landholders and families, and no business presence.

Longreach travel agent and event promoter Danny Sheehan has calculated that the most recent visit cost $6168 to bring hay to each of the 100 landholders registered to receive hay in the greater Muttaburra region.

The cost of hay – Darlington Point to Muttaburra

Mr Sheehan said he’d run fundraising operations for 25 years and he’d love to sit down with Brendan Farrell to change the model so that “half a million dollars worth of diesel doesn’t go up in smoke”.

“I just want to see that money give a better bang for the buck,” he said.

Mr Farrell declined to comment, saying only that what he thought and did was his preference.

Muttaburra Shop and Fuel owner Fiona Turnbull spoke in his place, saying she hadn’t missed out on anything, having ordered dog nuts the week after the convoy delivered some.

“I’m happy for people to receive, providing it’s a one-off,” she said, adding that a lot had been purchased from her shop for the weekend, and a lot of drivers fuelled up there before heading home.

She said the benefit of the hay runs that couldn’t be measured in dollars was the way they lifted spirits.

“It’s so good for people to actually be helping. 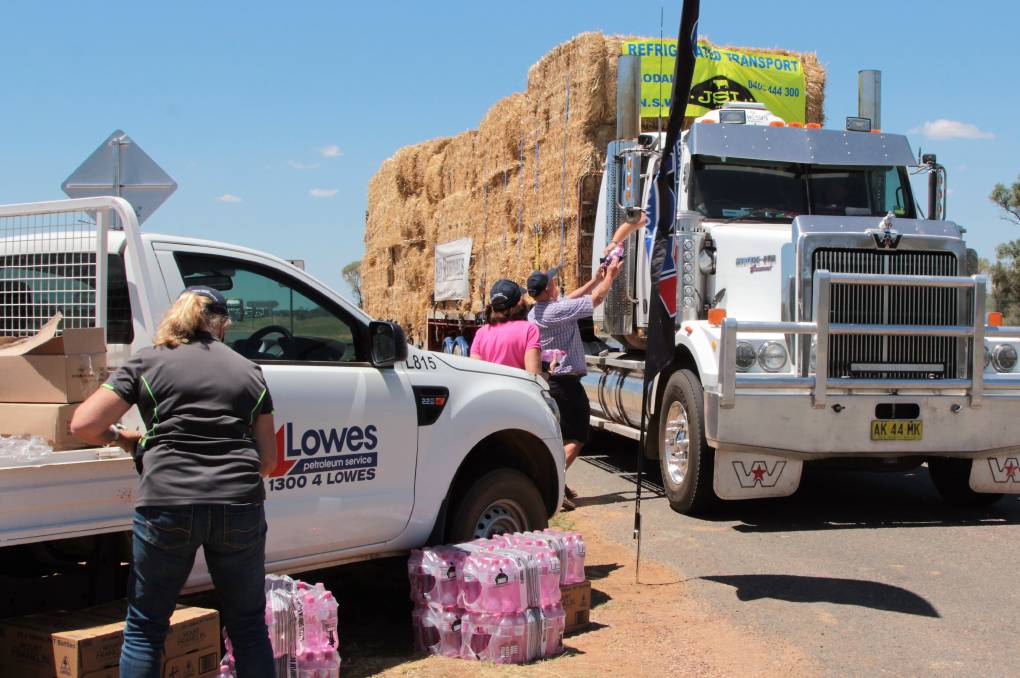 Communities are mobilised throughout western NSW and Queensland to feed hundreds of truck drivers.

“A lot of drivers wanted to take the hay out to properties to see the circumstances for themselves.

“Most of the drivers are everyday Aussies who want to connect with the people they’re doing this for.”

Muttaburra grazier Jenni Gray agreed that the human element of the hay runs needed to be considered and valued.

She said a lot of the undertaking should be measured by the time and care donated, as well as the giving of a valuable product, and the effect that had at the other end.

“A lot of these people have been on the land and affected by drought themselves – they’ve got their own stories to tell,” she said.

“It got people up here from Tasmania, from South Australia, Victoria, the Riverina, all seeing with their own eyes what’s happening.

“New friends have been made. I think that’s important, to share.”

Ms Turnbull said in return, the people in drought were able to get off their properties and have some time out.

“Ninety per cent of Queensland is drought declared – hay isn’t easy to get and it’s a big expense to outlay.

“Where that hay went – well, money isn’t everything.”

According to Western Queensland Drought Appeal chairman, David Phelps, cash was always king, because of its multiplier effect, but he said his group was always keen to work with the generosity of others, in whatever form it took.

“We will always respect the wishes of donors,” he said.

* An earlier version of this story included different figures. These have now been corrected.