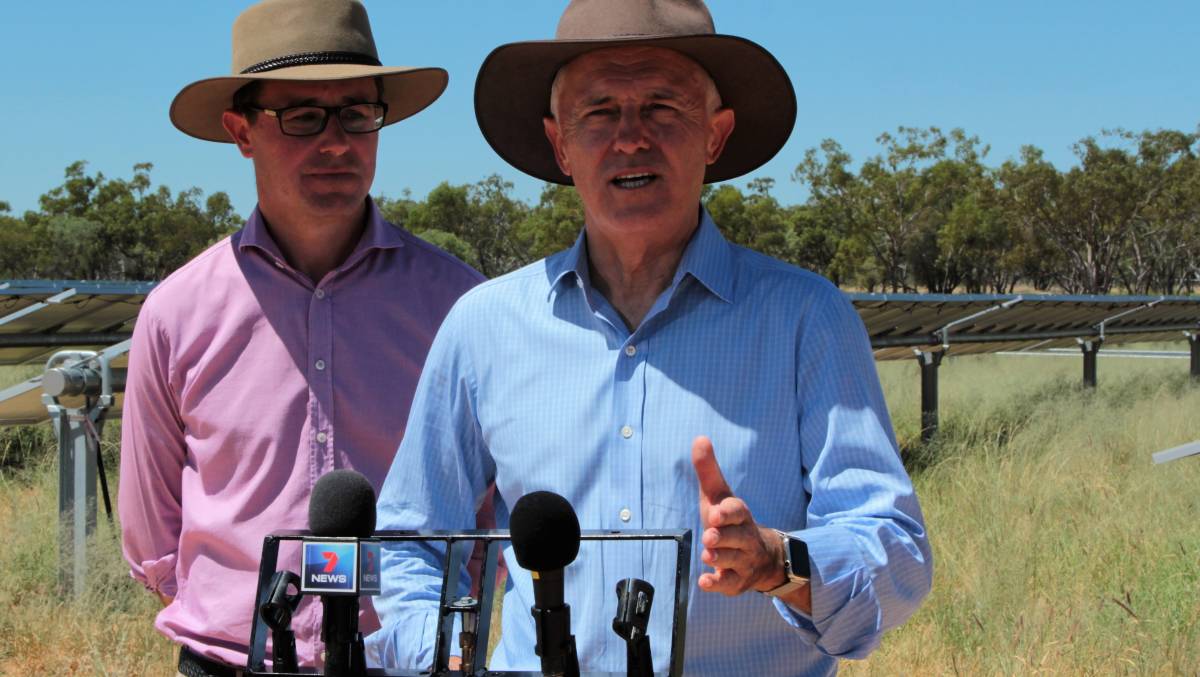 Long regarded as a vast region populated by livestock and pests, the electorate of Maranoa was recalibrated as at the vanguard of energy innovation in Australia when Prime Minister Malcolm Turnbull visited Barcaldine on Sunday.

Long characterised as a vast region populated by livestock and pests, the electorate of Maranoa was recalibrated as at the vanguard of energy innovation in Australia when Prime Minister Malcolm Turnbull visited Barcaldine on Sunday.

As mirages shimmered across the 70,000 solar panels of the newly-constructed solar farm on the eastern side of town, Mr Turnbull and local member David Littleproud soaked up the rays of the western Queensland sun and declared the federal government receptive to all forms of energy generation.

The recently completed 25 megawatt plant, described by its Spanish developer Elecnor as using the newest available technology, formed the backdrop to Mr Littleproud’s statement that the Maranoa electorate was starting to become the Australian hub for energy.

“We’re putting a third pillar to the Maranoa economy – agriculture, tourism and now energy,” he said. “This is an exciting time for the people of Maranoa in diversifying our economic base and ensuring we also get a sensible energy policy that will put downward pressure on electricity costs.”

He acknowledged the presence of coal-fired power stations, solar power, the recently announced wind energy project at Kingaroy, and gas, omitting geothermal energy from the list of the electorate’s power attributes.

For people who have until now been on the margins of electricity generation and largely cost takers, the Prime Minister seemed to hold out a promise of cost containment through a distributed network and better energy storage solutions.

“Much of the cost in an area like this is in the distribution and transmission network,” he said. “As you’re able to generate more energy locally, and it might be as local as the roof of your house, if you have the ability to provide the backup storage, then you’re in a position to have much more independence and in future, lower costs.”

Barcaldine solar farm developer Elecnor, which has sold 80 per cent of the asset to an undisclosed buyer, has announced that it has secured more land and will double in size, and include 10MW of battery storage. The Barcaldine solar farm is currently 80ha in size but will soon take up another 180ha and double its generating capacity to 50MW, as well as 10MW of battery storage.

Elecnor executive director Joseph De Pedro said there had been a lot of uncertainty around Australia’s Renewable Energy Target when the project at Barcaldine was started but this had since dissipated.

At present the farm is pumping half its maximum capacity of 25MW into the grid and the remainder is expected to be put in within the next 10 days.

“The battery storage is important because we’re trying to provide energy when the network is in demand, when people get home from work and turn everything on,” he said. “Batteries will extend our energy out to when the sun goes down.”

Questioned about government policies on energy, Mr Turnbull agreed they were ‘agnostic’, saying the federal government wanted to use all means available.

“Every form of generating electricity and technology has great value, but of course you’ve got to get the mix right,” he said.

He described the Labor government in South Australia as putting ideology ahead of a “practical businesslike approach to energy, driven by engineering and economics”.

“A key part of this is ensuring we get the techology mix right and that we plan the network correctly,” he said.

Mr De Pedro said the visit had been very positive. Prime Minister Malcolm Turnbull had plenty of questions for Elecnor representatives in Barcaldine.

“The Prime Minister was very supportive of renewables, and very knowledgeable – he knows what he’s talking about,” he said. “We were supported by ARENA and the Clean Energy Corporation, and he made an effort to see what we had done.”

Premier Annastacia Palaszczuk issued a statement on Sunday, saying her government had an estimated project pipeline of $2 billion and the promise of more than 1900 jobs during construction.

“The Barcaldine solar farm cost approximately $70 million and created up to 175 construction jobs,” she said.

“The nature of large-scale renewable project is they are built in regional areas.

“On Thursday last week, the government announced progress on four projects with a combined investment of more than $700 million in Oakey, Kingaroy, Collinsville and Longreach.”

She described the comments from federal government spokespeople on renewables as “uninformed at best and dishonest at worst” and said they undermined efforts to attract overseas and interstate investment in renewable energy projects and jobs in Queensland.