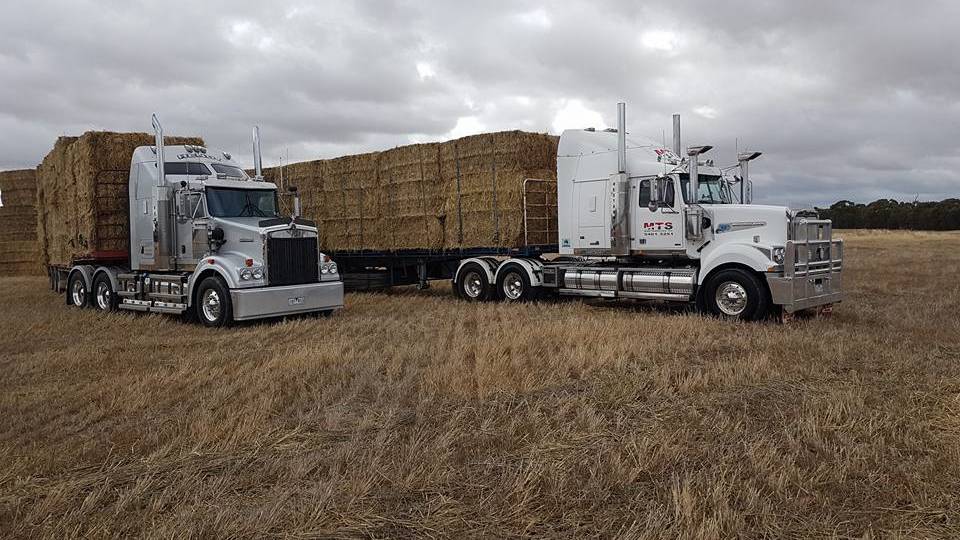 Trucks belonging to Hendy Transport and Maryborough Transport Services were loaded up on Sunday with hay donated by Victorians Chris, Barry and Shane Bibby, ready for another morale-boosting 2000km mission to Muttaburra. Photo source: Facebook.

Drought-stricken graziers are looking to the material and psychological lift promised by the Burrumbuttock Hay Runners.

Drought-stricken graziers in Queensland’s central and north west have turned away from fizzled-out hopes of deliverance offered by Cyclone Alfred in the Gulf of Carpentaria this week, and are looking instead to the material and psychological lift promised by the Burrumbuttock Hay Runners.

The grassroots movement to deliver hay and hope to primary producers on hard times has been cranking through the gears over the last few months to organise what will be the third enormous delivery of hay to a widespread region that’s had minimal rain relief, and is about to hit top gear.

In an effort that resembles the first incredible 1860km trip in January 2016, described at the time as creating a new Australian legend, some 120 prime movers hooked up to 200 trailers, carrying somewhere in the vicinity of 5000-6000 square and round bales of hay, will be setting off from Darlington Point, near Griffith, and other parts of Australia, on February 23.

The difference this time is that the destination is Muttaburra, 150km further than the convoys have travelled before. 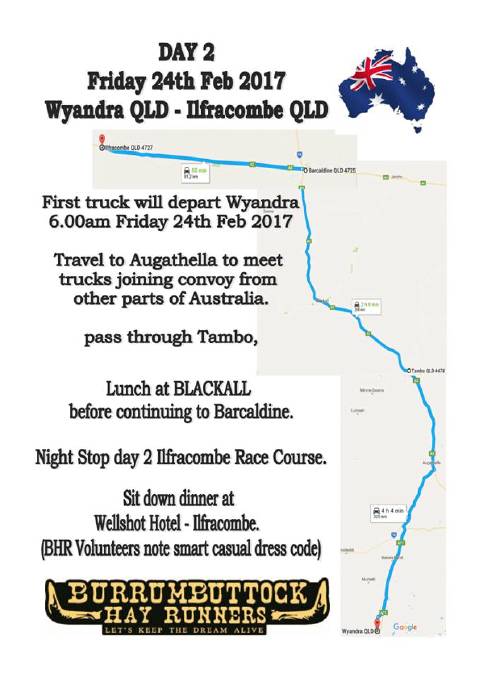 The convoy's route on day two.

Burrumbuttock Hay Runners founder Brendan Farrell said it was a logistical challenge but nothing he and fellow drivers, many of whom have been on all 11 previous hay runs around Queensland and New South Wales, weren’t able to handle.

Backing them up on the receiving end is the Barcaldine Regional Council, and mayor Rob Chandler said they would be doing all they could to support such a wonderful gesture.

“I drove from Barcaldine to Winton last week and back via Morella and Muttaburra, and there’s a lot of country lining up for more drought.

“There wasn’t enough winter rain to bring stock back, and there’s been no general summer rain, only storms.

“There’s only five weeks to the end of the official wet season in Queensland and people are terrified.”

He said the presence of so many truckies taking time out of their lives to help would be sure to lift spirits.

According to Cr Chandler, around 100 people are registered to receive hay from this delivery.

The convoy will be stopping at Wyandra on its first night in Queensland on Thursday, before proceeding on the well-trodden route to Ilfracombe for another overnight stop and a private function on Friday.

Brendan expects the trucks will begin rolling in to Muttaburra around 9.30am on Saturday, where the day will be spent unloading bales, before a free evening concert featuring Hay Runners ambassador Jayne Denham will take place for the BHR team, graziers and townspeople. 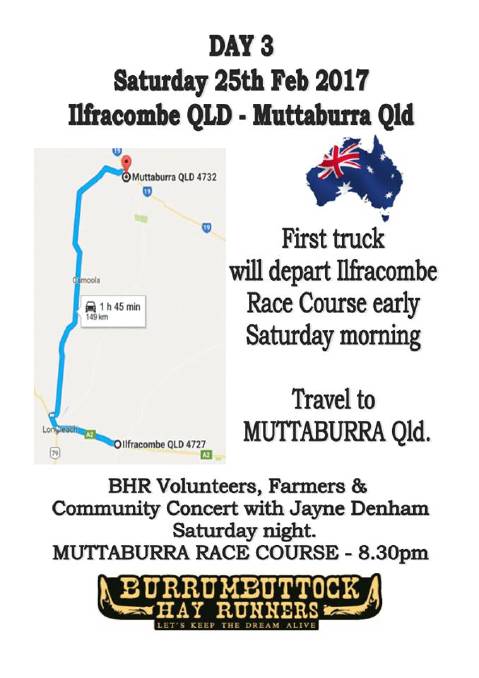 The final day of the convoy to Muttaburra.

Some trucks will stay loaded for delivery to other locations. Whether that includes Hughenden is up in the air at this stage, according to Brendan.

“We’re working on arrangements for Hughenden,” he said. “It’s a logistical nightmare, about 200km of dirt road, and trucks are doing this for nothing. If it rains, the road’s not passable.”

Commenting on a recent Longreach Regional Council resolution that organisers be encouraged to seek weed free certification, Brendan said that all donations were cereal hay.

“If they’re worried about weeds, the farmers may as well walk off now,” he said. “The winter rain they had brought more weeds than we ever will.”

He colourfully described his chances of getting certification from generous donors.

“This is all about letting people know we care. Just about every sector in rural Australia is rooted right now.

“A lot of people are going to be in need for a while yet.”

Some 40 to 50 trucks have already been sent to the fire relief effort at Dunedoo in central NSW, and Brendan said hay was still being baled on Tuesday that could be used there.

Early indications from the latest survey conducted by the Western Queensland Drought Appeal are showing there hasn’t been any improvement in community fortunes, spokesman David Phelps said.

“There’s been anything from a 40 to 60 per cent reduction in turnover from a normal year, and not much movement in housing sales.”

Cluster fencing projects were bringing optimism but they were yet to translate into mass restocking.

The continuing fragile economic state of Queensland’s west isn’t lost on Brendan Farrell and his helpers.

“This drought hasn’t gone away and neither have I,” he said.