FISHERS WORRIED: Fisherman Michael Wood, one of the industry representatives negotiating with the state government.

Politicians argue over compensation as search continues for the source of a disease outbreak in Logan River prawns.

PROFESSIONAL fishermen have called for a total Logan River fishing ban in an attempt to control the spread of an exotic disease in prawns.

It comes as a brawl breaks out between politicians over compensation for prawn farmers and trawler operators whose businesses have closed due to white spot disease.

The disease has been found in a Logan River prawn farm, prompting the closure of it and two of the eight others nearby in the $88 million a year industry. A ban on fishing for crustaceans is already in place.

Fisheries Minister Bill Byrne said no compensation would be paid but Logan River farmers and fishermen would have costs reimbursed for any work carried out under the direction of Biosecurity Queensland.

“I am looking at other ways we can help them get back on their feet once we can be sure all traces of the virus have been eradicated,’’ he said.

“...I have received a request from the Queensland Seafood Industry Association for compensation on behalf of prawn trawler operators.

“...I have explained ... that there is no compensation mechanism in legislation and we are not operating under a national deed.” 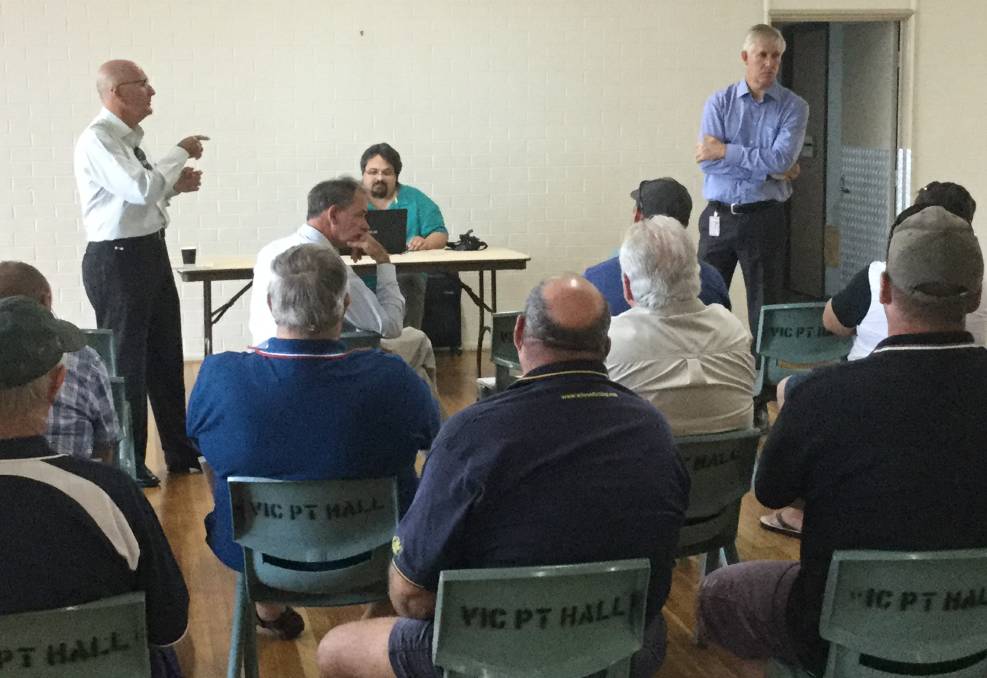 TALKS UNDER WAY: Fishermen, Biosecurity Queensland and federal government staff at a meeting at Victoria Point to discuss white spot disease in prawns.

"Labor needs to understand if commercial fishers can't fish, they can't pay their bills,’’ he said.

Mr Last said it was not fair that individual fishers and farmers should bear the costs of protecting the industry.

Federal MP Andrew Laming said there was no compensation scheme in place for damages caused by the disease to the seafood industry under the Biosecurity Security Act.

Moreton Bay Seafood Industry Organisation trawler representative Michael Wood said the thought of the disease spreading out of the Logan River was a nightmare.

“We’re worried about the environment as well as the fish stock,’’ Mr Wood said.

The disease has occurred in Australia once before at Darwin and then apparently had faded out.

Fishermen have met with Biosecurity Queensland staff at Victoria Point in an effort to learn more about what was being done to prevent its spread.

Mr Wood said the ban on the taking of any crustaceans should be widened to all fish.

Mr Laming said he supported the call for a total ban.

“The livelihoods of the people who run the trawlers, prawn farms, crab and fishing boats rely on the health of the river and its stocks,’’ he said.

“The response to the outbreak needs to take a ‘no regrets’ approach to the activity on the river until the agencies know for sure what is going on with the disease.”

Mr Wood said it was not clear yet whether a ban was needed on the importation of prawns and prawn farm food from Asia where the disease is widespread.

He was aware that some amateur fishermen bought imported prawns at supermarket outlets which were used as bait although it was not known if these or prawn farm food could be a vector.

The great fear was the loss of income that fishermen would incur and long term damage to fish stocks and the environment should the disease spread.

He said it was only a matter of time before a summer flood event occurred in which prawns would be whased out of the Logan.

Mr Wood said there was no reason for consumers to be concerned about cooked prawns. “This is a nightmare,’’ he said. “Years ago we lobbied for imported prawns to be banned because of fear about white spot getting into stocks,’’ he said. “It’s all through Asia.

“It could be catastrophic here. We just don’t know.’’

Mr Byrne said there were various theories about the source of the outbreak. “It is pure speculation. Tracing investigations are under way but the cause may never be confirmed,” he said.

Mr Laming said the outbreak was not expected to put prawn supplies at risk for Christmas and there is no danger to human health.