Bush people are renowned for their improvisation and “making do” in adversity, and the partnerships that have made that possible for the Channel Country Ladies Day were celebrated in a short video launched at Blackall last week.

Bush people are renowned for their improvisation and “making do” in adversity, and the partnerships that have made that possible for the Channel Country Ladies Day were celebrated in a short video launched at Blackall last week.

Begun in 2011 and held in remote locations at Durham Downs, Noccundra, Betoota and Eromanga in ensuing years, the annual event that aims to create connections and inspiration was the subject of one of 19 stories from around Australia that were aired to celebrate Community and Philanthropy Partnerships Week, from December 5-11.

Titled Inspiration in Isolation, the 10-minute Power of Partnerships video was one of only three made of Queensland philanthropic activities, from grants totalling $152,000. 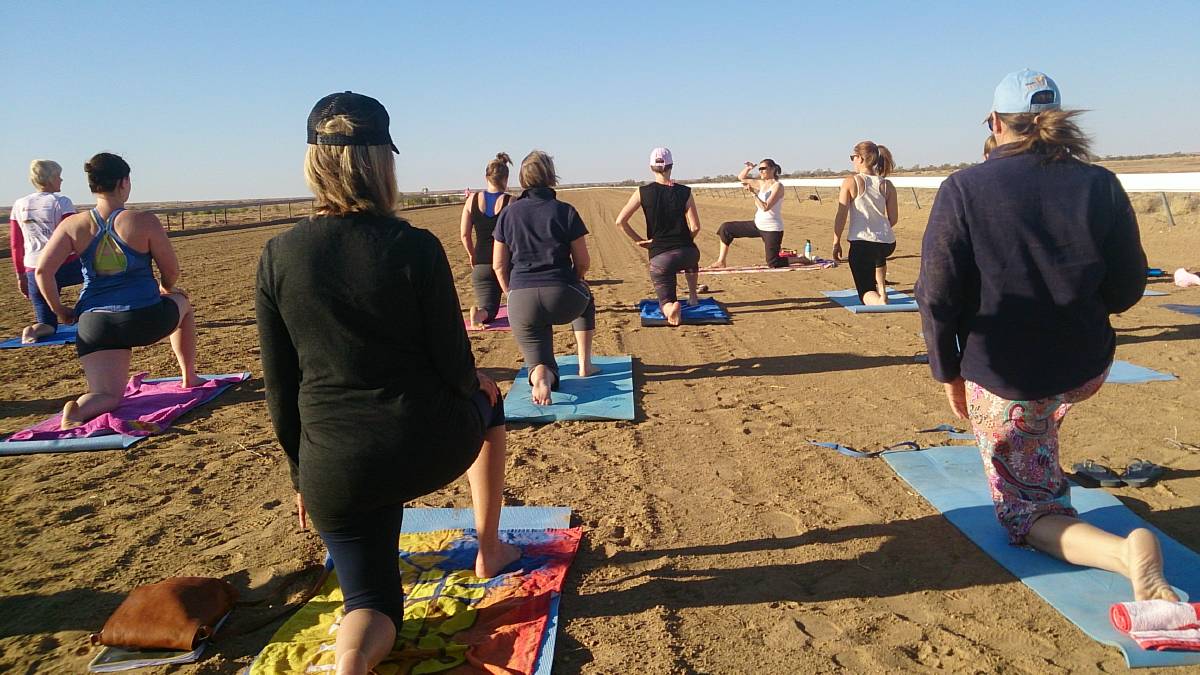 Early morning yoga on the Betoota racetrack at the 2014 Channel Country Ladies Day.

It was produced by Blackall’s Kirstie Davison and Lisa Alexander, who travelled to Betoota in October this year to showcase the difference the Channel Country Ladies Day and its partners have made for remote women.

It was a new opportunity for the pair who are stepping out in western Queensland creativity circles.

“Betoota is off the grid so a generator was going in the background throughout the filming,” Kirstie said. “We had to learn on the go – they were extreme conditions to learn under.”

Their video highlights the many partnerships that make the weekend possible, thanks to arts workers, health professionals, chefs, entertainers, and volunteers, some of whom fly in yearly from South Australia.

Committee member Kiri Broad said none of the weekend’s important activities would be possible without sponsorship.

“Partnerships are crucial,” she said, acknowledging the formal auspicing arrangement in place with Red Ridge, a body that works with communities, government and donors to make a myriad of arts activities possible in remote Queensland.

Kiri said it would be important not to see the event cease when the bush was experiencing good times, a perennial ebb and flow issue that organisations across the west confront.

“We want buy-in from partners, so they can see that what they’re giving money to is making a difference,” she said.

Fellow CCLD committee member Liz Lynch said the biggest thing she got from the weekends was seeing people come together.

“I’ve worked outside the area and I can tell you, it doesn’t happen everywhere,” she said.

The unique feeling of connectedness was something that one of this year’s presenters, Brisbane-based comedian Kat Davidson commented on in one of Kirstie and Lisa’s short clips.

“The women out here live so far away from each other but they share so much camaraderie,” she said. “And they’re natural storytellers.”

Red Ridge manager Louise Campbell said she was sure that once the video went live, there would be global opportunities to promote the unique way that western Queensland works together.

CPPW is supported through the Prime Minister's Community Business Partnership and managed by Philanthropy Australia in partnership with the Foundation for Rural and Regional Renewal.

It provides an opportunity to share knowledge and best practice, and to strengthen or develop new relationships and partnerships.