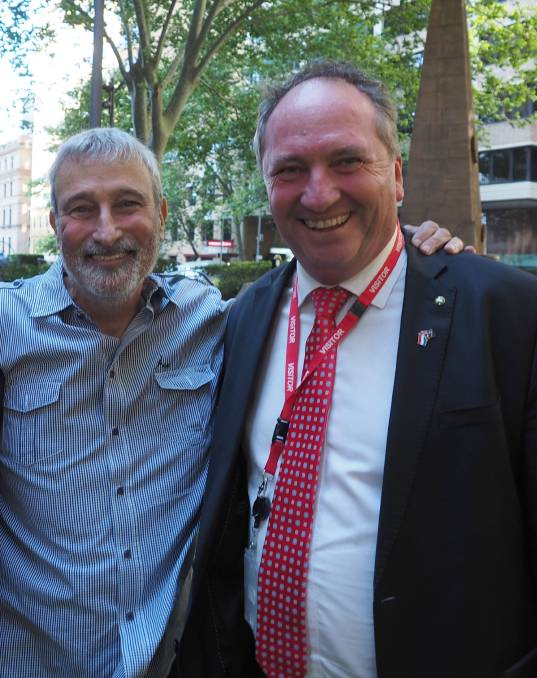 Despite staunch, ongoing opposition from mainstream farming groups, Mr Joyce has pushed ahead with moving the APVMA from Canberra into Armidale situated in his northern NSW electorate of New England, under the Coalition’s decentralisation policy.

Shadow Agriculture Minister Joel Fitzgibbon has repeatedly criticised his opposite number over the move that he says contradicts the core findings of an independent cost-benefit analysis, ordered by Prime Minister Malcolm Turnbull, to inform the government’s decision.

Mr Fitzgibbon’s latest attack on the Nationals leader - in defence of preserving the APVMA’s Canberra location - has been to question Mr Burke’s role, who was instrumental in establishing the farm chemical regulatory agency, in endorsing its decentralisation.

“Barnaby Joyce’s pork barrelling - that is the relocation of the APVMA to his own electorate - just became a whole lot more controversial,” Mr Fitzgibbon said at the weekend.

“Barnaby Joyce needs to explain to the Australian people what conversations or any arrangements he had with celebrity gardener Don Burke before Don Burke agreed to do a video with Barnaby Joyce promoting and supporting the relocation of the APVMA to Barnaby Joyce’s own electorate.

“This relocation is very bad news for the Australian farming community.

“Labor supports the creation of jobs in the regions, but not when it comes at the expense of our farmers and the capability of the agency to deliver towards their productive aspirations.”

In a Facebook video posted last week, Mr Joyce said Mr Burke was “instrumental” in setting up the APVMA and its next move would creating a centre of excellence through the shift to Armidale.

Mr Burke said the relocation was “the best thing I think the APVMA has ever done”, placing it in the “absolute centre” of country activities which would keep a “balanced focus”.

He said the APVMA also needed some “fresh innovation” and “I really believe in this move”.

Mr Burke said the Nationals leader had “absolutely nailed it” on the APVMA relocation.

“It’s (APVMA) primarily focussed on country activities; what they’re looking at is all of the chemicals that go into all the crops and all of the animals that finish up with us and they need to be in touch with people and particularly the country,” he said.

Last week, Mr Fitzgibbon also held a media conference with former Labor Agriculture Minister John Kerin who he said was “actually the real father of the APVMA” after he convinced the states to come together under uniform regulation.

He said the APVMA had almost 200 staff comprising mostly regulatory lawyers and scientists but only 10 per cent pf them had indicated they’re prepared to move to Armidale.

“The Government’s own cost benefit analysis, which they had to be dragged screaming to release after many months, indicates itself that this is going to bad for agriculture,” he said.

“In fact they suggest a one year delay in the regulatory process will cost the agriculture sector almost $200 million every year here on.

“A recent report suggested the work of the APVMA underpins $18 billion of food exports from this country every year.

“Without the APVMA working efficiently and effectively, our exports will be undermined.”

Mr Kerin said prior to the APVMA’s starting in 1992, each state did its own chemical and veterinary medicine registration which was very expensive and costly to the farm sector and “the delays were quite enormous”.

He said the arguments being used to justify the Authority moving to Armidale were, “frankly idiotic because a function is far more important than location”.

“The function of this body will be in peril for at least two or three years if this goes ahead - it’s just nonsense,” he said.

“Canberra is in the centre of a vast agricultural region.

“The specialist skills of the people in this organisation are toxicologists and they are rare people and their function means they are examining what comes from the big manufacturers  overseas, mainly in the northern hemisphere.

“The southern hemisphere has particular characteristics so this is what has to be looked at.

“It is just terribly important (but) this is going to be put at risk.”

Mr Fitzgibbon also criticised his counterpart last week over speculation the APVMA’s Advisory Board - which the Abbott/Turnbull Government abolished - wouldn’t be “resuscitated”.

“It's time we knew all the facts and consequences of Minister Barnaby Joyce's pork barrelling exercise,” he said.

But Mr Joyce told Fairfax Agricultural Media the federal government declared it would undergo a decentralisation policy and the APVMA was being “picked on” by Labor because it was headed to Armidale.

“This is something the Labor party in the past have done themselves when the minerals and energy department went to Maitland,” he said.

“But we are going to make sure that the largesse of our nation is spread more evenly across it - not centralised in one spot.”

Mr Joyce said there was a “clear nexus” between the APVMA’s work and that of the rural science department in Armidale at the University of New England, the CSIRO and the Cotton Research Development Corporation.

“A lot of people who work at the APVMA are graduates of the University of New England,” he said.

He also strongly rejected Labor’s accusations of pork barrelling, over the APVMA relocation.

“They talk about cost benefit analysis when they’ve never passed one at all,” he said.

“If we change the electoral boundary of New England so it didn’t include Armidale, would that fix the problem?

“(Building) the Sydney Opera House, was that pork barrelling for Sydney?

“I’ll tell you what would play out really badly (in regional areas), is if we keep everything in Sydney and Canberra.”

However, Mr Fitzgibbon said the APVMA doesn’t interact with farmers but did so with the major chemical companies that made the veterinary medicine and crop protection products.

He said there was “no need to be talking to farmers” and also no link to the APVMA and research at any particular university.

“I have been involved in the decentralisation debate for all of my political life.

“I have seen it work where it has been well planned and makes sense, is logical and has the support of key stakeholders.

“There is no long-term planning here and has been no homework done.

“Barnaby Joyce is trying to argue the case somehow that this is going to generate lots of jobs in Armidale.

“Undoubtedly it will create a few jobs in Armidale, but the cost benefit analysis shows the community wide or nationwide economic effects are negligible.

“There is no case for moving this agency, other than the case to re-elect Barnaby Joyce.”

After the APVMA’s relocation was formally revealed last week, the National Farmers’ Federation said the Australian government was on notice to continue to deliver on much needed reforms.

NFF CEO Tony Mahar said improvements in the APVMA were needed as a result of the move, including: decreased timelines for product approvals; renewed investment in Australia for new products; and improved efficiencies in the organisation.

He said additional delays in bringing new chemical products to market would be incredibly damaging to Australian farm businesses.

“We must see continued improvement in the functionality of the APVMA from this move,” he said.

“Funding allocated to regulatory reform must not be diverted to subsidise the relocation.

“The NFF has always been concerned that moving the APVMA would result in a loss of highly specific and skilled regulatory scientists, and damage organisational continuity – which would delay the already difficult registration process for new pesticides and medicines.

“This can’t be allowed to happen.

“The government has been insistent on the relocation and must now deliver on the positive benefits they envisage – or they will be held accountable for any negative impact on farm businesses.”