Rural and remote communities suffer a higher number of cardiac risk factors, and higher rates of cardiac-related hospitalisation than their city cousins. That was the take-home message from the founder of Heart of Australia bus, Dr Rolf Gomes, to 330 guests attending the inaugural luncheon in memory of the late Graham Bridle at Meadarra, last Friday.

Dr Gomes, the Heart of Australia bus and his team including driver Glenn Yates, health assistant, Trudy Bresson, operations manager Chris Wilson, Endocrinologist and Physician Dr Merryn Thomae  were guests at the lunch held at in the garden of  Uralla, home to Scott and Ann-Maree Atwool.

The Heart of Australia bus formed the centrepiece to the event and will be the benefactor to the funds raised through the day including raffles, silent auctions, and a open auction.

“The incidence rate for cardiac conditions may be as much as 44 per cent higher in rural and remote communities, than in metropolitan populations,” Dr Gomes said.

A former electrical engineer before studying medicine, Dr Gomes was regularly frustrated while working as a junior medical registrar in the country.

“As a cardiologist I recognised the problem, and as a former engineer I sought to fix it,” he said.

“The Heart of Australia bus now delivers world class medical service as we all have a part to play, to leave the world in a better place.

“Since the program was launched in 2014 we have seen 1600 rural cardiac patients, kept 200 patients out of hospital, and there are up to 100 people still alive, because this bus rolled into town.”

Rolf has a passion for rural health

Cardiologist Dr Rolf Gomes, had a vision is to revolutionise the delivery of first-class speciality medical services to rural and remote communities, which is now a reality. 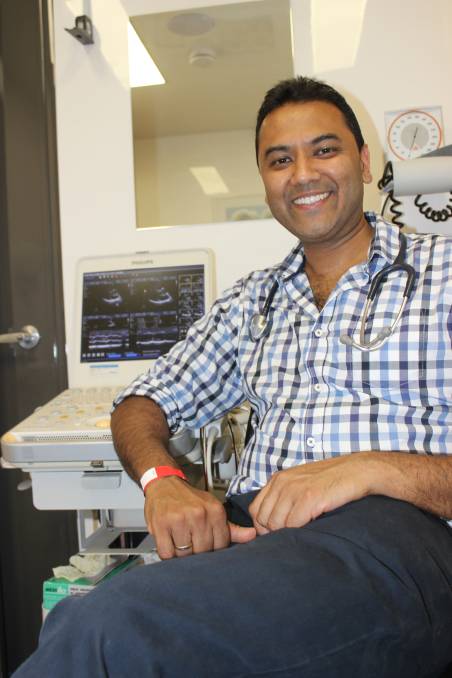 Dr Rolf Gomes in his consulting room on the Heart of Australia bus. Picture: Helen Walker

Rolf started his working life as an electrical engineer before turning to medicine and studying cardiology.

It was while as a young registrar in country hospitals, Rolf experienced the challenges of trying to diagnose and treat patients without the specialist and diagnostic services people in the city take for granted. And  as a cardiologist he identified the problem, but as an engineer he sought to solve it.

His idea was a mobile clinic, and now the Heart of Australia bus travels to 13 towns across Queensland treating patients and giving them a much better chance of surviving heart disease.