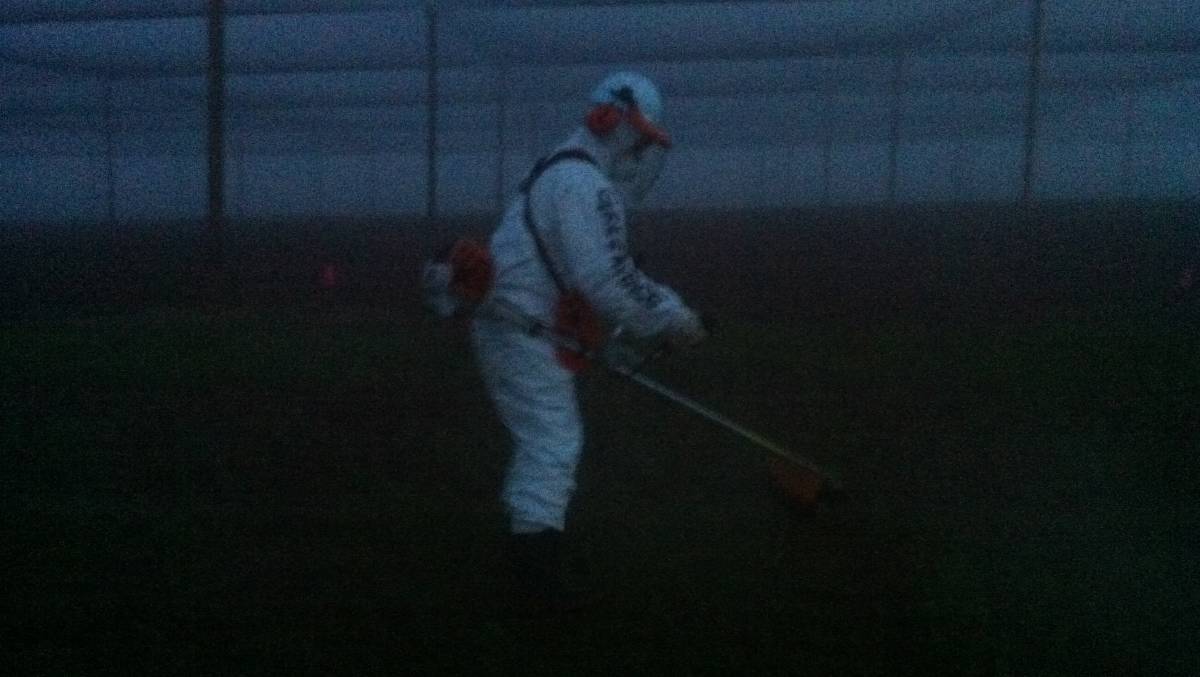 Images of the CSIRO incident distributed to media at the time by Greenpeace highlighting destruction of the scientific trials of biotech crops that were researching human health and agronomic traits.

Greenpeace's failed anti-GM campaign has been highlighted in a report into the eligibility of environmental groups for tax free donations.

AN examination of the environmental register has highlighted curious contradictions associated with Greenpeace’s destruction of biotechnology crop trials at CSIRO’s Canberra scientific research facilities and the publicity stunt that severely backfired almost five years ago.

The activist incident was outlined in detail in a report handed down by the House of Representatives Environment Committee last week which recommended sanctions against groups listed for tax deductions that break the law repeatedly.

Committee Chair John Cobb said the two Greenpeace employees only trespassed on crown land at CSIRO’s Ginninderra Experiment Station to destroy Genetically Modified crop test-trials, using a whipper-snipper, because they feared the research would be successful in proving the product’s safety and environmental efficacy.

The report cited several facts of the case presented in the ACT Supreme Court, set out by Justice Penfold.

“Early on the morning of 14 July 2011, the two accused, wearing protective suits, face shields, hard hats and ear muffs, climbed over several fences to reach the genetically modified wheat crop and then used brush cutters with nylon cutting heads, sometimes called whipper-snippers, to cut down the wheat crop,” it said.

“One of the two (accused) conducted interviews for ABC Radio and Television and shortly afterwards, digital footage depicting the actions of the protesters was provided to ABC staff and also posted on the internet.

“Later that day, Greenpeace released a statement on its official website about the removal of what it called the ‘controversial crop’, quoting (the two accused).”

The report said at the time of the incident, the two individuals were both employees of Greenpeace Australia Pacific Limited, which is an environmental DGR (Deductible gift recipient).

It said in a pre-sentence report, they stated that “non-violent direct action” was necessary to advance their campaign to end production of GM food.

Prior to the trial’s conclusion, Greenpeace made a payment of $282,560 - the amount identified as the cost of reinstating the lost experiment - to CSIRO in the nature of reparations.

The report said this was noted by Justice Penfold in discussing Greenpeace’s role in the incident.

Justice Penfold was quoted: ‘The material before me suggests that these offences were committed at the instigation of, or at least with the backing of, those who are ultimately responsible for the operations of Greenpeace Australia. The willingness of those people to spend over $280,000 on reparations, presumably money intended by Greenpeace supporters to fund the pursuit of Greenpeace’s aims rather than the re-instatement of a GM experiment run by CSIRO, indicates wholehearted support, at least among the organisation’s leaders, for the actions of (the two accused)’.

The report went on to say that in the months preceding the incident, Greenpeace had submitted several Freedom of Information requests to the CSIRO in an attempt to ascertain the nature of the experiments being pursued at the site.

But it said the FOI requests were refused on the basis of commercial confidentiality.

The report also cited a response to questions at a public hearing of the Committee inquiry by Greenpeace Australia CEO David Ritter who stated that the incident occurred prior to his employment with the organisation.

However, Mr Ritter went on to suggest that the handling of the incident by the relevant authorities was “an example of the system working”, it said.

“Mr Ritter also argued that the extent of Greenpeace’s support for the two individuals did not constitute a broader endorsement of illegal activity,” the report said.

The report said the Greenpeace CEO had also ruled out activities of a similar kind from occurring in the future.

However, it said Greenpeace’s inquiry submission stated that ‘non-violent direct action’ was one of its ‘key methods for protecting the environment’.

At the conclusion of the ACT court trial, CSIRO said it welcomed the fact that “those responsible for the damage to this important trial have been appropriately dealt with by the criminal justice system”.

But in a written statement Greenpeace also made a firm promise to continue campaigning against the introduction of GM wheat technology into Australia.

“We will do this by working with farmers to ensure they get protection from the threat of contamination this technology poses to them and their crops and thus their livelihoods,” the statement said.

The report said more broadly, some stakeholders expressed concern about some environmental DGRs engaging in unsafe protest activity and protest activity designed to interfere with commercial or industrial operations.

In its submission to the inquiry, the NSW Police Force explained: ‘The familiar protest tactics observed are interference with business activities through obstruction of vehicles and roads, ‘lock-ons’, trespass, malicious damage and the erection of harmful structures designed to cause delay such as placement of flammable liquids around blockades’.

“Representatives of several industry associations submitted that protest activity has, in some instances, involved serious risks to the safety of employees, volunteers, and other members of the community,” the report said.

“Industry representatives also noted the financial cost that can be imposed on taxpayers and affected companies by protest activity.”