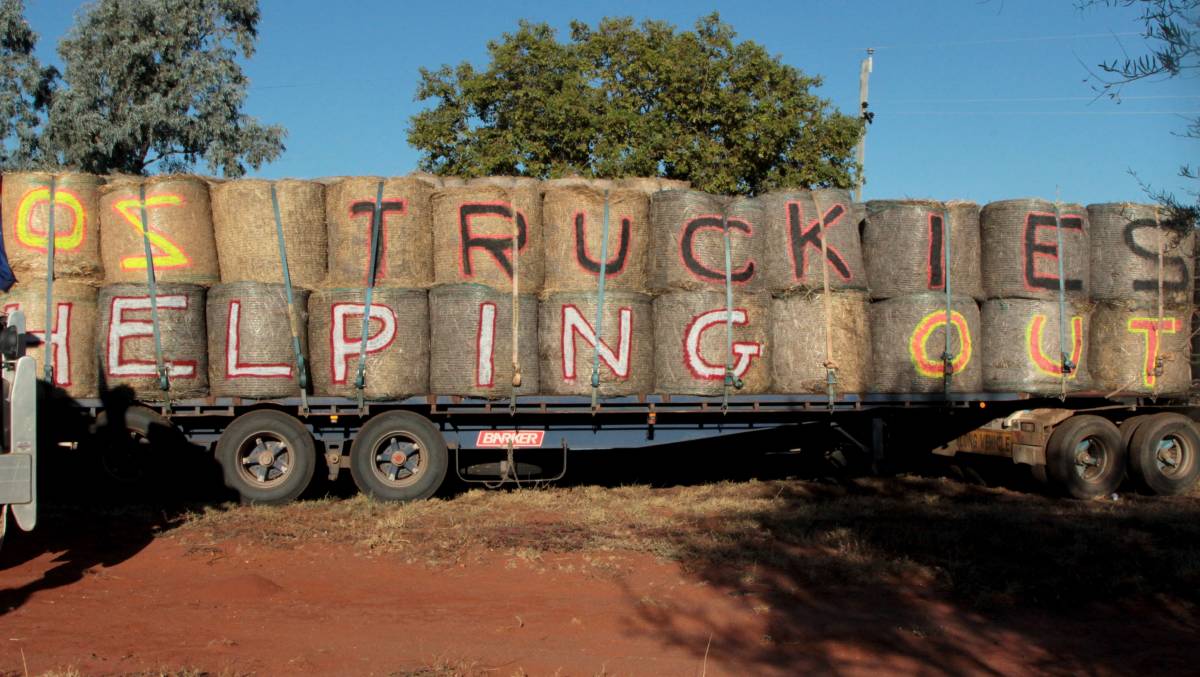 "Oz Truckies helping out" - the sign says it all to passers-by as the Hay Runners spread their message of support throughout regional Australia on a canvas of hay.

Tears flowed and flags waved as western Queensland welcomed the Burrumbuttock Hay Runners back to the region.

“That was the most epic sight anyone will have the honour to witness” and “I don’t think we’ll ever see this again” – these were the reactions not just of grateful western Queenslanders crowding the sides of the Landsborough Highway on Friday afternoon, but from some of the 258 truck drivers shedding a tear as they helped the Burrumbuttock Hay Runners create history yet again.

After an overnight stopover on the streets of Wyandra, south of Charleville on the Mitchell Highway, the original convoy bringing 13,500 bales of hay from Darlington Point in southern New South Wales started their engines for the final leg of yet another record delivery of hay to hungry stock in western Queensland.

As they rounded the corner onto the Landsborough Highway at Augathella, dozens of other hay-laden trucks from various parts of Queensland pulled in behind to create the world’s biggest truck convoy. Trucks filled with hay on their way into Ilfracombe.

They spent the next five hours experiencing a hero’s welcome from the people who have been trying against all odds to keep their stock alive as the drought goes on.

On the sides of the road to Ilfracombe were messages daubed across corrugated iron or flapping in the hot wind on sheets.

It’s patriotic but a real shot in the arm for people who often feel they’re forgotten by mainstream Australia.

To a man and woman, the truck drivers volunteering their time said they wanted to do something for people doing it tough.

Many of them will be arriving at the Ilfracombe race course on Saturday morning as $6m worth of hay gets distributed to 800 graziers feeding 300,000 animals.