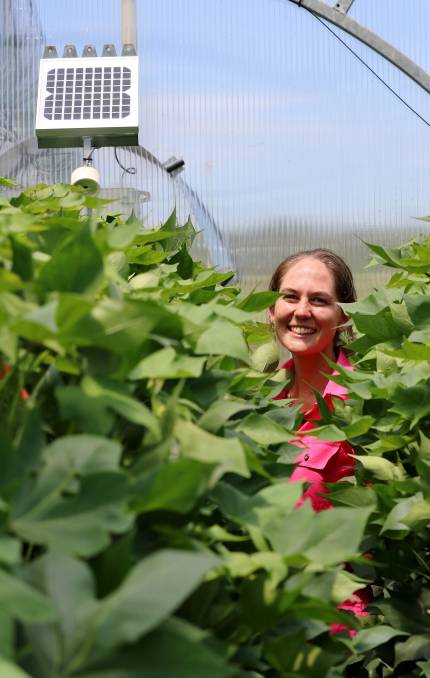 CSIRO and the Cotton Research and Development Corporation (CRDC) have invested in the new ‘Climate Change Facility’ at the Australian Cotton Research Institute, which is the first of its kind in the world.

The Climate Change Facility consists of dedicated in-crop chambers that modify atmospheric carbon dioxide concentration CO2 and temperature together to study the integrated effects of elevated CO2 and warmer temperatures on cotton grown in the field.

A major part of this investment is supporting Katie Broughton, a postdoctoral fellow in crop physiology, to undertake these world-first experiments.

“It is especially challenging undertaking these studies in a summer crop, as controlling temperature in chambers with our summer heat requires significant cooling,” Katie says.

“While there have been some studies in other industries, my research is a first for the cotton industry globally.

“This research continues on from my PhD studies, also supported by CRDC to study the physiology and growth of cotton in elevated CO2 and temperature scenarios.”

Now in its second year, Katie’s Climate Change Facility project has included constructing four chambers which control temperature and CO2 in a field at ACRI, to replicate potential future scenarios of different CO2 and temperature levels.

With current CO2 air levels at around 400 parts per million (ppm), the treatment with the most ‘extreme’ levels is injecting 550 ppm CO2 into the chamber and temperature is set to between two and four degrees higher than the ambient temperature compared with the conditions in the control plots outside the chambers. With current rates of CO2 and warming increases, it is expected that the levels replicated in the trial will be realised in around 30 to 50 years. The effects on the plants are immediately visible.

“It’s lucky I’m not claustrophobic,” Katie says as she enters the chamber, with cotton plants towering above her, around twice the height of the surrounding crop outside the chamber.

While increased growth was expected, Katie is still surprised by just how much.

“The plants didn’t get this big last year, but last year we only took them through to 64 days after planting,” she said.

“We are attempting to take this experiment through to yield to ascertain whether this growth is translated into higher yields and quantify the effect on fibre quality.

“Last year, elevated CO2 increased total vegetative biomass by 57 percent compared with plants in the ambient CO2 chamber, but there were no effects on fruit number or fruit biomass, so it will be very interesting to see what happens this season.”

Previous studies have shown positive effects on yield, but Katie is particularly interested in crop water use.

“It is conceivable that the larger plants could use more water early in the season, leaving less water for fruit growth, which is a concern if water is limited” she said.

“Once we determine the effects we will look at management strategies such as irrigation and growth management in next season’s trials, so we can be ahead of the curve in terms of how we are going to manage crops in a changing climate.”

Collaborations with scientists in other organisations continue to be important in these studies. The experiments are being undertaken with support from Professor David Tissue of Western Sydney University and Paxton Payton who works for the United States Department of Agriculture in Lubbock, Texas.

CRDC R&D Manager Allan Williams and CSIRO Agriculture’s Mike Bange were instrumental in supporting the establishment of the Climate Change Facility and say this research is vital if the Australian cotton industry wants to be prepared for future climate.

“As well as investigating the implications of increased levels of CO2 for managing cotton, the chambers will be also useful for systematically studying the effects of other stresses, especially temperature,” Allan said.

“Currently our ability to investigate, in a field setting, how to manage extreme temperatures is limited by reliance on whatever the seasonal conditions are each year of the project.”