THE gravel road leading to Red Rock, 10km northeast of Roma, gives nothing away about the gem of a home you are about to find at the top of the rise.

Your first look at the ultra-modern home Ben and Chloe Suffren built in 2014, however, tells you this is the moment that Grand Designs meets the Maranoa.

Fully cladded in beautiful Spotted Gum and featuring a striking skillion roof, elevated ceilings and polished concrete floors, the simple u-shaped home was designed by Ben and Chloe with the help of their friend and builder, Harley Lamond and designer Adrian Ramsay from AR Design House.

“We basically took a drawing to Harley and then he came looking at house sites with us,” Chloe Suffren said.

“The design hasn’t really changed much since then.”

Harley struck out on his own in 2013, establishing the Roma based HB Lamond Constructions after a decade of working with other builders.

Building the Red Rock house with Ben and Chloe was somewhat of a risk given the long friendship the trio have shared and many tried to warn them off the idea.

“Everyone said we shouldn’t do it but we did it anyway and I don’t think we would have been able to do this with anyone but Harley,” said Ben, a qualified plumber turned earthmoving contractor.

“Because we were mates we were able to bounce ideas off each other and deal with problems as they arose and be flexible.”

Red Rock was Harley’s first complete build and a challenge that he relished. 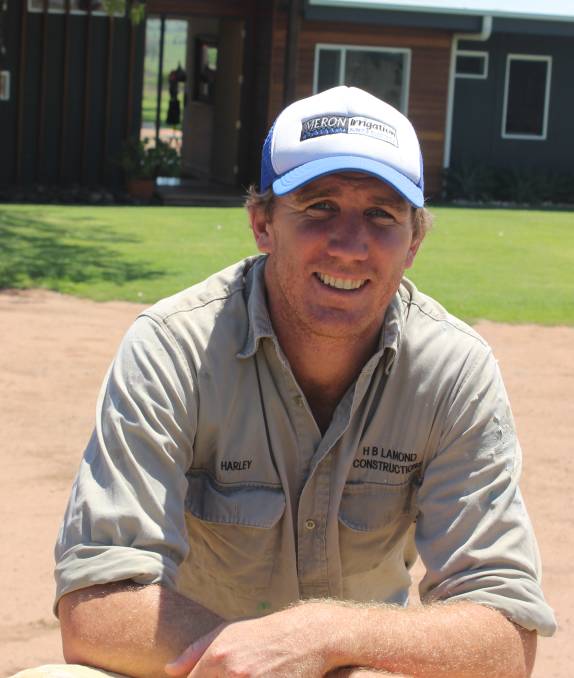 “It was pretty scary but really exciting at the same time and I doubt I’ll get a chance to build something in this style again for a while,” he said.

“It took eight-and-a-half months to build and we’re all pretty proud of the outcome.”

For Chloe, who is home most days with the Suffren’s two children, Ava, 3, and Arlo, 15-months, the proof is in the livability of the home.

“It’s just such a great space to live in,” she said.

“It’s warm in winter, cool in summer and if we want to, we can feel like we are living outdoors most days.” Chloe and Ben Suffren and their children, Ava, 3, and Arlo, 15-months, love living in their new home.

Central to the design of the Red Rock home is it’s positioning on the 21ha block to capture the winter sun and block summer’s heat.

Sitting in the shade of an old Ironbark, the house faces northeast and large L-shaped stacking glass doors allow the polished concrete floors to warm with the morning winter sun.

Underfoot is a hydronic heating system that heats the polished concrete via hot water.

Ben Suffren installed the heated flooring and said while initially expensive, it was a cheaper alternative to split systems.

The home also features plenty of louvers to allow the breeze to move directly through the home during summer, negating the need for air-conditioning on most days.

“The concrete floors keep it very cool and we have shutters and louvers on windows and walls that allow us to keep the home really open,” Chloe said.

The 2.2m wide polished concrete hallway also doubles as a sunroom and has been a triumph for Chloe. 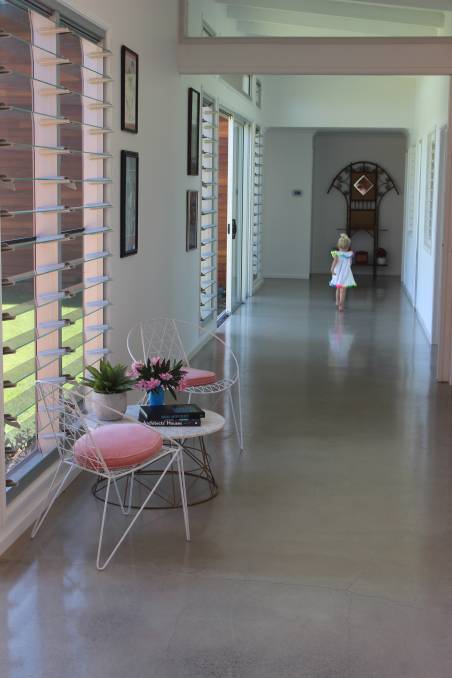 The 2.2m wide polished concrete hallway also doubles as a sunroom or playroom for the kids.

“People thought we were mad sacrificing bedroom space for such a wide hallway but I just love it and the kids play in this area all the time,” she said.

“It gives them somewhere to ride their bikes inside.”

The hallway includes hidden sliding doors that enable the bedrooms to be shut off from the living quarters to save on heating or reduce noise.

The main ensuite features a beautiful mosaic wall and an outdoor shower with views across the nearby hills. Another indulgence was a massive 3.6m x 1.8m window in the master bedroom.

“It’s so big that we can lie in bed at night and see stars,” said Chloe.

The living area of the home centres around the L-shaped stacking doors that lead to an outdoor deck in the grassed courtyard.

The kitchen includes a butler's pantry, a large caesar stone benchtop and cupboards made from two-packed Hoop Pine plywood.

All the kitchen, pantry and bathroom cabinetry was provided by Palmwood Cabinetry on the Sunshine Coast.

“Trent from Palmwoods Cabinetry also did the bookcase as you come in the front door which together with the two-way fireplace in the living room helps to create a little separate library or sitting area which I just love,” Chloe said.

The kitchen and bathroom tiles were purchased at Ceramica Senio at Noosaville. Stylish yet warm furnishings make it a comforable family home.

Other features of the home include exposed rafters inside the living areas and tongue and groove ceilings.

Like many of the materials, the cladding was sourced locally from Cypress Supplies while the concrete was provided by the Roma based Grulke concrete. 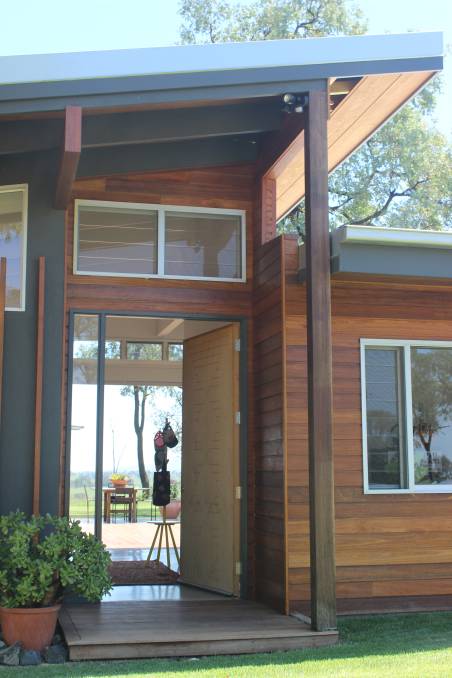 The home is designed so guests can see straight through to the courtyard as they enter.