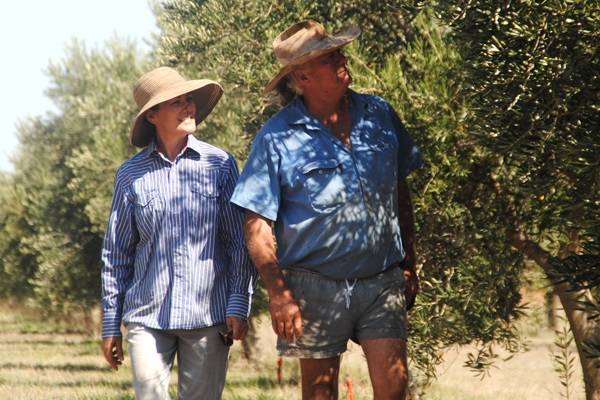 WHEN Bill and Karen McLennan purchased their 10,000ha Charleville property, Sommariva, in 1993, they never envisaged one day establishing an olive grove there.

WHEN Bill and Karen McLennan purchased their 10,000ha Charleville property, Sommariva, in 1993, they never envisaged one day establishing an olive grove there.

Located 40km east of Charleville, Sommariva was just intended to be their family home - a base from which to indulge in their love of endurance horse riding and to run a few cattle.

But dreaming of an early retirement to the property from their busy panel beating shop in Charleville, the McLennan’s began to consider ways to diversify their home into a sustainable farming enterprise.

When a family friend suggested they try olives the idea took root.

“We had a friend visit who had recently been on a trip to Italy where he toured the ancient olive groves,” Mrs McLennan said.

“He marvelled at the similarities in the climate and suggested that with vast expanses of comparatively cheap land and without the need to ship product from Italy we could possibly become a competitive producer of olive oil in Australia.

“The idea sounded like it had potential and it fitted in with our desire to diversify our operation and to create something for us to continue with in our retirement.”

In 1996 the McLennan’s began planting the olive grove, starting with a trial plot of 1200 trees.

It was a busy time for the pair who were also raising two young children as well as running their panel shop and a cattle operation on Sommariva.

The planting was largely successful and last year, the McLennan’s picked 27 tonnes of fruit from the grove which was then processed on-farm to sell under their Sommariva Olives label.

The McLennan’s currently sell their olive products online and through their Sommariva Olives store in Charleville.

They also have a showroom and shop at Sommariva which is open for tours on request.

“Each variety was chosen because of their reputation of being the best for either table fruit or for oil as well as some dual purpose trees.”

“We found that as long as you can keep the water up to them and keep them well fertilised and pruned they will all fruit well.”

Both Bill and Karen have attended several seminars run by the Australian Olive Industry Association to learn about the art of growing, picking and preserving olives. Mrs McLennan has also learned through extensive research and trial and error how to add many other items to their product lines such as soap, tapenades and spreads.

Harvesting is done by hand and usually begins in early March and continues until the start of winter while the olives ripen from green into black.

Once harvested, the olives are brought back to the sorting shed where 80pc of the fruit is crushed for oil.

The table olives are sorted and graded for quality and only the best fruit is stored in barrels of salt brine to begin the de-bittering process.

“When you harvest the fruit for oil you have a very limited time to crush this fruit before the quality starts to deteriorate,” Mrs McLennan said.

“Due to our remote location we decided to purchase our own crushing machine as there was no way we could pick and transport our fruit to be processed at another plant within hours.”

“Because we have seen such good crop yields, we have quickly out-grown this machine and really need to upgrade to a larger one.”

“We have to run the machine 24 hours a day to keep up with the pickers and even then we often have to pull them up.”

After crushing, the oil is stored in stainless steel barrels in a temperature controlled environment.

“We then test the oil for oleic acid and grade it as extra virgin or virgin olive oil and bottle it accordingly,” she said.

“All our oils are retested every six months for quality purposes.”

“I value add to the oils by making infused oils as well as a range of skin care products including soaps, creams and massage lotions.”

It’s constant and often tiring work and although the venture has not yet begun to pay its way, Mrs McLennan said she has no regrets.

“I am pleased we have done it and we have actually started planting another block of 2400 trees,” she said.

“The olives are full on for me, particularly when we are picking and crushing and then the rest of the year I am busy making up products.”

“My biggest issue is that I get so tied up working at our panel shop in town that I don’t get enough time to dedicate to this section of our businesses.”

“I could probably push at it a lot more – I get a lot of requests to attend markets but many of them coincide with Bush Christmas and we sell a lot of product there each year so that’s a very busy time for us.”

“The Sommariva Olive Shop in Charleville gets many visitors and locals through who like to buy a different kind of memento from Charleville, and our web site is also starting to take off.”

“We get a few tours coming to the farm to have look at the facilities and buy products – we like that we have created something fairly unique in this area.”