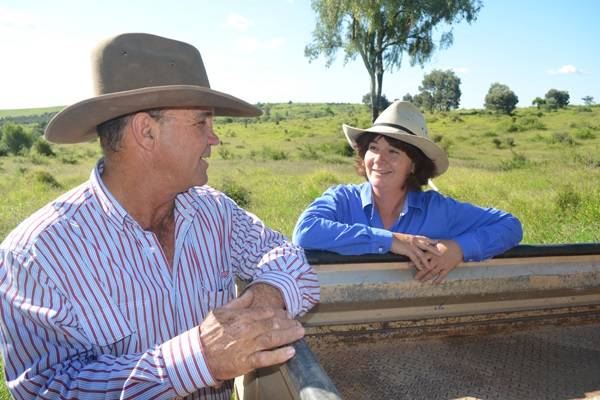 DEPUTY Premier Jeff Seeney and gasfields commissioner John Cotter have slammed the corporate practices and attitude towards landholders displayed by state government owned corporation Powerlink, with both men demanding the company "change its tune" at the negotiation table with farmers.

The strong criticism comes after landholders across the Yuleba region continue to attempt to negotiate with Powerlink over compulsorily acquired land the company seeks to construct 100km of proposed transmission line and four substations, west of Wandoan.

The "Wandoan South to Eurombah Transmission Network Project" has been requested by Australia Pacific LNG (APLNG), which is majority owned by Origin Energy and ConocoPhillips, to supply power to its future gas processing facilities across the Western Downs.

Multiple landholders have told Queensland Country Life they feel "intimidated" and "powerless" in the face of Powerlink managers who repeatedly claim the relevant sections of the Acquisition of Land Act 1967 (ALA) as well as apparent precedents established during the 2012 land court decision, Lowry v Coordinator-General, mean the company is not required to compensate landholders for lost time, travel expenses and accountancy costs during negotiation.

Landholders have also told QCL they feel increasingly pressured to not seek adequate legal, accounting and valuation costs because Powerlink is both denying it is required to cover these costs, or when pressured, the company is only offering compensation capped at $1000-$2000.

Landholders say they feel further financially burdened because under the current legislation, if they do seek expert advice, farmers are expected to pay all upfront and ongoing fees, which can reach into the tens of thousands of dollars, and will only be reimbursed by Powerlink after the easement acquisition has taken place and only if the company deems the claimed landholder costs to have been "reasonably incurred."

Legal and other professional fees prior to the acquisition of land (easement and freehold) will not be paid.

Landholders have told QCL that at no point in more than one year of discussions with Powerlink has the company indicated how it calculates what is "reasonably incurred" costs, leaving many farmers to worry they could ultimately be left heavily out of pocket for seeking advice during negotiations over compulsory acquired land.

If the landholder wishes to dispute the ultimate compensation figured offered by Powerlink, their only course of appeal is the land court, which adds further legal costs to the already debt burdened farmer.

These legislative imbalances will no doubt sound eerily familiar to many readers who were forced to negotiate land access and compensation agreements during the "bad old days" of the early rollout of the coal seam gas industry in Queensland.

Powerlink Property and Acquisitions Network Property Manager Guy Nash writes in correspondence to impacted landholders Gary and Kerry Ladbrook, Bulah, Yuleba, that the company is guided by precedents set by the land court's interpretation of the compensation measures (listed under section 20 of the Acquisition Land Act) during the 2012 land court judgment, Lowry v Coordinator-General.

When Mr and Mrs Ladbrook ask in an email to Mr Naish whether Powerlink will compensate for landholder time and accountancy costs, the simple response is "no" citing the precedent of the Lowry case.

Furthermore, minutes from meetings between the Ladbrooks and Powerlink show an initial compensation offer was made by Powerlink of $1000 for legal and accountancy fees and $2000 as a license fee, which "may include some of the landholder's time."

Having read the 60 page Lowry v Coordinator General land court judgment which Powerlink frequently references, Queensland Country Life is left to wonder if senior Powerlink managers have actually studied the case, because there are a series of very clear land court statements which contradict the claims of Powerlink and in fact prove the court decision could potentially show quite favourable outcomes for landholder rights.

In fact during the Lowry judgment, the court records state "it is possible under the ALA for an applicant to make out a claim for owner's time."

However, the records add that costs must detail the nature of economic loss suffered by the landholder as a consequence of the taking of the land and that is must be supported by documentary evidence and be quantifiable to prove it has been "reasonably incurred".

"To make a claim for lost profits a claimant must lead evidence of actual lost opportunities to do work," the land court judgment states.

During the Lowry case it was revealed the Coordinator-General's office had offered landholders a blanket compensation amount of $5000 for legal fees and $5000 for valuation fees, with the landholder expected to make up the difference.

However, when challenged through the land court, this compensation figure was dismissed because the Coordinator-General's office could not provide evidence on how that $5000 figure was a "reasonably incurred" amount.

The court then provides appropriate documentary evidence such as an affidavit from a solicitor detailing why their legal fees are "reasonably incurred."