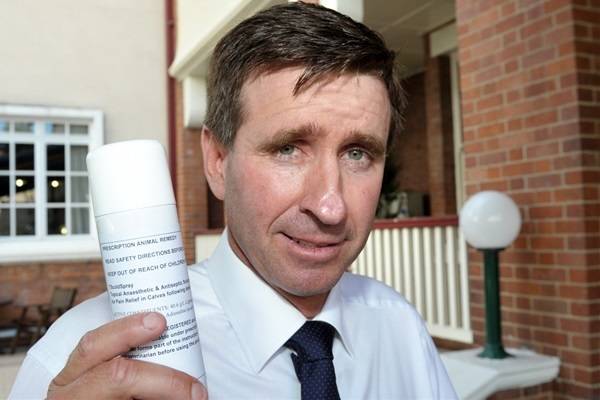 Zanda McDonald with the latest in pain relief for cattle.

THE McDonald family has been at the forefront of innovation and technology adoption to improve their business for decades, as well as a willing contributor to beef research to further the Australian beef cattle industry.

THE McDonald family has been at the forefront of innovation and technology adoption to improve their business for decades, as well as a willing contributor to beef research to further the Australian beef cattle industry.

MDH, in collaboration with the CSIRO, is the first commercial cattle producer in the world to trial germ cell transplantation technology, known as testis cell transfer

(TCT), where the genetics of Bos Taurus bulls are implanted into Bos Indicus bulls to cover females in the extreme conditions of northern Australia.

The TCT technology is currently being used to transfer Angus semen cells to Brahman bulls. If the trial work being conducted by CSIRO is successful, it has the opportunity to accelerate the MDH Angus composite cross-breeding programs with their Brahman female herd in Far North Queensland.

The objective is to breed a composite herd that will have a greater productivity in the feedlot relating to higher marbling scores, better saleable meat yields and tenderness qualities for better grading acceptance into the MSA category.

If successful, the project will enable the infusion of elite genetics to produce calves with improved market characteristics while using Brahman bulls that are adapted to the tropical environment.

The first calves from those trials are due to hit the ground by the end of this month at a research station in Armidale, NSW.

MDH is a privately owned and operated family beef cattle company that commenced business in 1827. The company runs 175,000 head of cattle spread over 11 cattle stations, as well as a feedlot, which are alllocated in Queensland.

MDH owns an estimated 34,000 square kilometres of land in Queensland, making the company among the largest landholders in the world.

MDH has developed a fully integrated supply chain, which involves breeding, backgrounding, lotfeeding, live cattle export and grainfed beef production, which includes marketing its own branded beef globally as well as domestically, and now direct to the end consumer

Cattle are bred on properties located in the Cape York Peninsula area.

They are then backgrounded on properties in the Cloncurry, Boulia and Winton region.

Cattle that are selected for the grassfed market are

finished on properties located in the Central Queensland Highlands, which have excellent pastures, including 2800ha of leucaena.

The cattle that are selected for the grainfed market are road transported to the Wallumba Feedlot, located near Condamine on the Darling Downs.

Each year the feedlot turns off about 35,000 head, including 23,000 grainfed cattle for the company’s Wallumba and Alexander brands.

These cattle that are put aside for MDH’s custom

kill program are road transported east from the

The Wallumba and Alexander brands are now

exported to more than 15 countries and the business continues to expand to new export markets every year.

MDH also has a very close relationship with Top

In October 2010, MDH was the first Australian company to be registered by the Brazilian Government to export beef to the lucrative Brazilian market.

MDH has also been involved in scientific research with James Cook University (JCU) on a project to demonstrate that high-quality meat can be obtained from grainfed entire male cattle.

received a $948,500 funding grant from Meat & Livestock Australia to conduct the research.

However, the Australian domestic market has historically heavily discounted young bull meat because of the perception that the meat quality was inferior.

MDH supplied the entire male Bos Indicus cattle for the project from properties on Cape York and Cloncurry. These young bull calves were then transported to the Wallumba Feedlot on the Darling Downs.

The research has verified that young bull

The bull calves have demonstrated weight gains in excess of 2kg/day in the feedlot.

MDH is in the process of obtaining Ausmeat and MSA accreditation to market yearling grainfed bull meat, with the potential to create a completely new market segment in the Australian beef industry.

* This article was first published in Queensland Country Life's Gamechangers feature in December 2012.