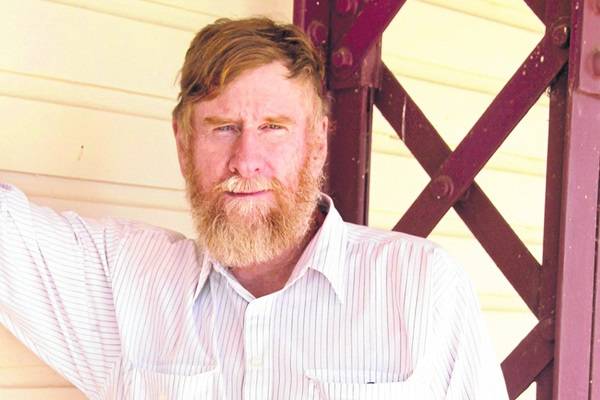 Peter Douglas says many land managers feel vulnerable – “in fact, akin to a threatened species” – thanks to the animal liberation and extreme green movements and the lack of knowledge or understanding of bush life and aspirations by suburbia and government.

AFTER almost 11 years as Desert Channels Group chairman, Peter Douglas has retired from being the public face of the Longreach-based natural resource management group.

AFTER almost 11 years as Desert Channels Group chairman, Peter Douglas has retired from being the public face of the Longreach-based natural resource management group.

Queensland Country Life journalist Sally Cripps worked alongside Mr Douglas on the Desert Channels Queensland (DCQ) board for a few of those years, and has talked with him about his work with and what it meant to him.

Sally Cripps: What motivated you to take on the position at DCQ?

Peter Douglas: "I had some uneasiness when asked to take on the job as chairman of the new group as I have a lot of time for those involved.

SC: What's been your biggest achievement on the board?

PD: "We have achieved trust and quite some measure of respect from the community.

"We made mistakes but admitted them and moved on. Having the group set up in three divisions - DCQ, DC Solutions and the Desert Channels Foundation, with the aim of channelling funding back to community priority projects as per the original framework. It was a lot of work, but if natural resource management groups are to survive, diversified income streams are a must, particularly in the rangelands.

"All three entities operate on a business basis with heavy attention to costs, outcomes and long term benefits. Though being mainly funded by state and federal government we are recognised as a reliable, competent and honest broker of funds, ideas, management and delivery.

"We have worked on the sound business principle of recognising the total environment as a basis for grazing."

SC: What's been your greatest disappointment?

PD: "Many land managers are feeling very vulnerable, in fact akin to a threatened species - the animal liberation people, the extreme green people, and the lack of knowledge or understanding of bush life and aspirations by suburbia and government has many feeling they are a target.

"The public at large has a right to know that country and animals are being managed to the best standards and to ensure this I think a levy of some sort (similar to Medicare) would be a benefit to all involved, coming through in the form of stewardship payments, co-funding of pest and feral control and encouragement of best management practices.

"This would ensure funding, community support and help loosen the grip the 'Black Dog' has on many. As a case in point, the callous indifference shown by the Mineral Council spokesman when the Lady Annie mine spill occurred and the slow response of government and the legal system did not help.

"I don't think many 'inside' people realise that the majority of people out here, particularly landholders, share a love of country similar to the indigenous people.

"It is to be hoped that everyone has learnt from the Surat Basin confrontations in relation to coal seam gas."

SC: How has the NRM landscape changed in the region in the time you've been involved? What brought about the changes and have they been for the better?

PD: "The grazing industry now has more emphasis on ground cover and biodiversity being part of the grazing business equation.

"Without the sum of all parts being taken into account, we cannot get the best out of country for the least cost (impact or effect) physically, financially, socially and emotionally. Many people realise this.

"Seeing the region as a whole and involving catchment, Landcare or neighbourhood groups on common problems has been an achievement.

"Continued pressure from groups like Desert Channels, AgForce and many individuals had much to do with the adoption of area management plans dealing with gidgee thickening on Mitchell grass downs."

SC: Each time there’s a change of government, your funding model changes. How should NRM funding be managed?

PD: “Natural Resource Management groups Australia wide may have some guarantee of continued funding, but politics plays a part in delaying payments and does not ensure any measure of job security in an industry that badly needs continuity of people and resources.

“As yet there is little recognition of NRM in regional planning schemes.

“Government investment changed under the federal Labor government to government priorities, not those identified by the regional plans, which hobbled our community plan operations somewhat.

“A sometimes differing outlook at times keeps everyone on the ball.

“Generally we end up on common ground.”