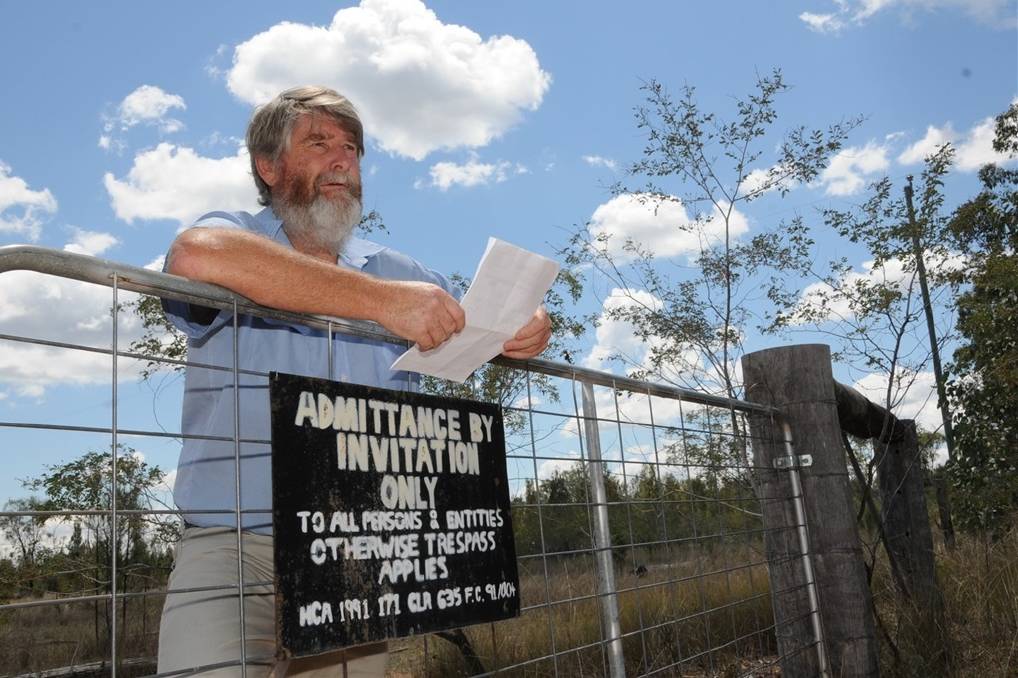 Brian Monk, Iona, Kogan, with a letter from NuGrow, is far from happy about his neighbour's CSG waste fertiliser plans.

IN A few months, Ipswich-based business NuGrow hopes to be spreading waste from CSG drilling and mining camps on the paddocks of its newly acquired Kogan property, Iona Park, and Brian Monk is far from happy.

IN A few months, Ipswich-based business NuGrow hopes to be spreading waste from CSG drilling and mining camps on the paddocks of its newly acquired Kogan property, Iona Park, and Brian Monk is far from happy.

That’s because Mr Monk’s 2000-hectare beef property, Iona, sits across the road from the 513-hectare Iona Park, and Mr Monk is full of fears about what the proposed project will bring to the area.

NuGrow’s proposal is to blend CSG waste waters, mulched green waste, liquid and solid food waste, treated and untreated effluent, biosolids and manures prior to spreading them on cultivated ground on Iona Park.

While NuGrow is certain it has all the boxes ticked prior to the project receiving Queensland Government approval, Mr Monk is not so sure.

He says he believes the soil conditioner or compost made from CSG waste will be saline and could contain harmful elements that will not be detected prior to the mix being spread on Iona Park’s paddocks. And when a serious flood comes, Mr Monk fears NuGrow’s compost will become his contaminant.

“When it hits Montrose Road, the water’s 18 inches deep and 2km wide. That’s what I said to NuGrow. It’s going to be my problem,” Mr Monk said.

“Our site will be a non-release site so that any run-off will go into an on-site dam,” he said.

A letter from NuGrow to Mr Monk and his wife Carolyn about the “proposed pasture improvement project”, dated October 24, was the first the couple knew about what was planned for across the road. It invited them to a November 7 meeting at Kogan Community Hall, where Mr Monk came away with more questions than answers. “What about biocides and polonium and uranium? Will they be testing for that?” Mr Monk said.

Mr Thompson says he believes they have.

“Prior to us accepting any waste stream, including CSG waste waters or effluent, we’ll require the producer to supply a lab analysis,” he said.

That analysis would be monitored to ensure it met government-set criteria – and NuGrow was no stranger to the process.

NuGrow already accepts drill waste at its Gracemere facility near Rockhampton, and organic liquid waste at other sites, including Swanbank near Ipswich, which is used in compost mixes.

The company is currently negotiating with parties that have CSG drill water and other wastes close to Kogan they need to offload, and Mr Thompson said any waters would be put through the Delta water treatment system to ensure it was not excessively saline.

“There is food waste and effluent coming from camps and we’ve come up with the solution to use it for agriculture instead of it going to landfill,” Mr Thompson said.

But Mr Monk has little faith in the Delta process for desalination.

“All they’re doing is hiding a large amount of salt."

“They are somehow avoiding calling it toxic waste by rebranding it as beneficial waste,” said Mr Monk, an outspoken opponent of the CSG industry.

NuGrow will be paid by drillers, mining-camp operators and others to remove the waste.

“The water is their enemy and they want to dump megalitres of it every day.”

But NuGrow sees the project simply as a means of using waste to benefit the depleted soils of the Western Downs.

Pending Department of Heritage and Environment Protection approval and under the Waste Reduction and Recycling Act 2011, NuGrow hopes to reclassify the wastes it takes in for the project as beneficial resources, rather than regulated wastes.

That means it will then be able to spread for agricultural use.

Under the proposed plan, collected wastes will be blended at Iona Park prior to being spread in windrows for regular turning to ensure odour-minimising aerobic conditions. It will then be applied to paddocks which have been cultivated to a depth of 50mm.

NuGrow will be required to work the product into the paddocks in a time frame, more likely to be hours rather than days, prior to planting of dryland crops.