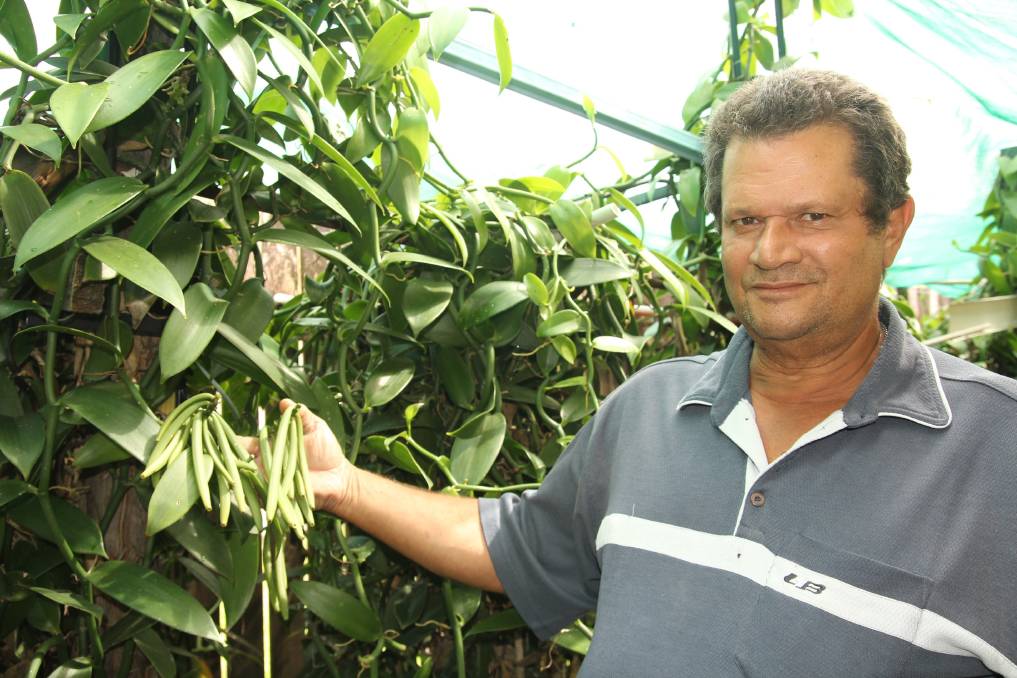 George Gonthier and his vanilla vines.

GEORGE Gonthier seemed destined to grow spices. His father, grandfather and great-grandfather paved the way in their homeland, Seychelles, in the western Indian Ocean.

GEORGE Gonthier seemed destined to grow spices. His father, grandfather and great-grandfather paved the way in their homeland, Seychelles, in the western Indian Ocean.

So when George and wife Josette's business, Daintree Vanilla and Spices, won an ABC Delicious 2014 Produce Award for their ground cinnamon - the only Queensland producer on this year's podium - it was a proud moment, steeped in family tradition.

"I'm not sure if we have processed the win or not," the couple said.

"We are proud. It recognises all the work we have put in and the quality as well."

The award comes on the back of an exciting period for George and Josette, who will soon start supplying their biggest contract ever to a Gold Coast-based Japanese company.

The Gonthiers worked with the company to relabel a product which will be known as Vanilla Kiss.

The company's first order astounded George and Josette, yet the couple remain loyal to their existing clients who have stood by them over the past 14 years.

Months later they returned with their family, having fallen in love with a 3-acre property in the Daintree Rainforest, north of Cairns.

They planted their first vanilla vine in 1988 but returned to the seafood industry to support the family while the new fledgling venture was developing.

Ten years later with enough rootstock, they decided it was time to dedicate 100 per cent effort.

In 2000, with more than 1000 vines, Daintree Vanilla and Spice went commercial.

Today the Gonthiers have a national customer base, with product sent all around Australia, stocked in shops and used in restaurants.

Celebrity chef Maggie Beer is a regular purchaser of the ground cinnamon.

The vanilla comes in all shapes and forms  beans, essence, sugars, salt and tea.

George and Josette use only the finest soil blends and natural fertilisers. The vines are grown in the underbrush of the rainforest using the available trees, so not to harm the environment and surrounding rainforest.

No harmful pesticides are used in pest management, as the couple prefer to use co-planting and natural insect repellents.

Demand for their vanilla products forced George and Josette to lease established vanilla vines at Redbank, near Cairns. They planted cinnamon to protect the vanilla vines - and a new product was born.

The Gonthiers were aware of the natural benefits of cinnamon through their association with various groups.

"We thought we would tempt the market with our cinnamon so we cut a tree down, debarked it, dried it and sieved it to make the powder," George said.

"The market accepted it and from then on people wanted more, so we decided to make a go out of it. We planted 27 trees to start with and that is steadily increasing every year."

Daintree Vanilla and Spice has graced the screens on SBS's Destination Flavour and ABC's Landline.

Since winning the award, the Gonthiers have been inundated with orders.

George says there is huge potential for more vanilla and

spices to be grown in far north Queensland.

"We in the north must grow spices," George said.

Despite being labour intensive - everything is done by hand, from the pollinating to harvesting and packing, the latter in the council-registered kitchen of their Edmonton home - George and Josette say their passion and devotion outweigh the hard work.

Their fortitude is currently being tested after losing up to half of their production from tropical Cyclone Ita in April this year.

"You love them (the vines) and they love you back," George said.

"You can't walk away from them."