Richmond's Camille Bargenquast is busy fundraising so she can live her dream to take part in the Mongol Derby in 2016 after being one of 40 riders selected from around the world. 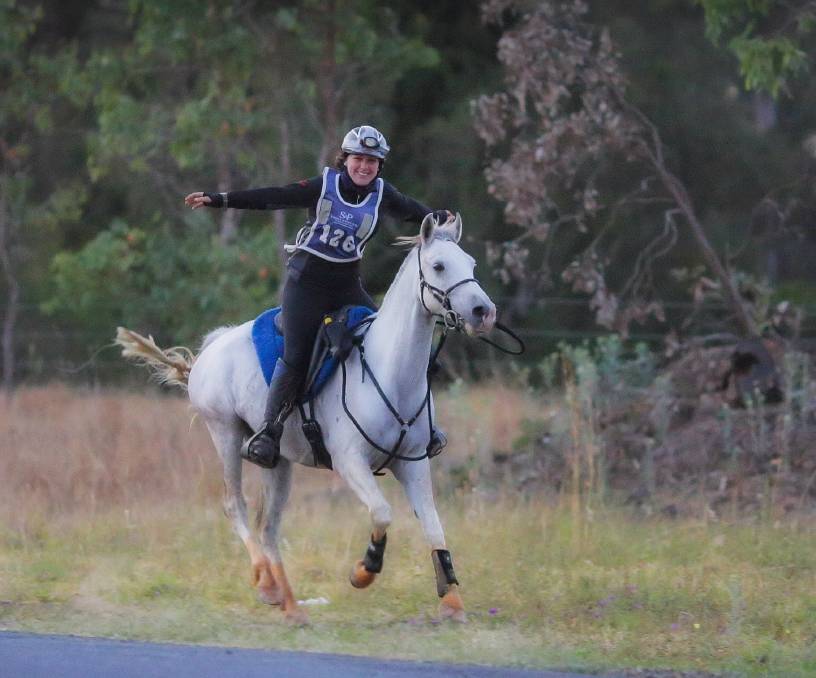 The adventurist: Richmond's Camille Bargenquast is busy fundraising so she can live her dream to take part in the Mongol Derby in 2016 after being one of 40 riders selected for the event. 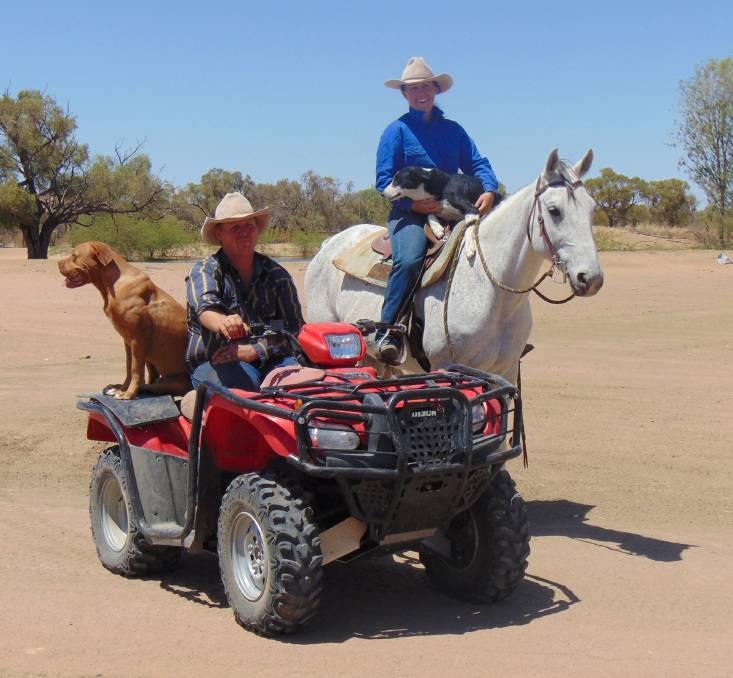 David and Camille with the "kids" ready for another day of work at Somerville.

You could never accuse Richmond’s Camille Bargenquast of being afraid of an adventure.

The expert rider who has traveled the globe searching for fresh thrills before finding a source of constant excitement in western Queensland is now attempting to fulfill her dream of competing in the longest and toughest horse race in the world next year; The Mongol Derby.

Hailing from a country town in France, the former Camille Champagne’s lust for excitement started at the age of four when one day while walking through a park she laid eyes on a horse up-close for the first time.

Camille said she distinctly remembers thinking to herself, “I’m going to ride those one day”. That day would come along very quickly as a mere two years later she had immersed herself in the world of competitive horse sports.

Up through to the end of her teens Camille competed in high-level equine events throughout the country, while becoming a top notch horse trainer along the way.

Endurance horse riding is Camille’s foremost form of enjoyment and seeing footage and photos of the vast open expanses of Australia; gave her dreams of taking long treks across this tough terrain in the saddle.

“That was the big attraction of Australia; combining my love of endurance riding with all the open space available here,” she said.

At age 20 year the feisty Frenchwoman was presented with the opportunity to work at a property in the small town of Kenilworth on the Sunshine Coast; an opportunity she grabbed with both hands.

And so it was that on October 17, 2008, that Camille arrived in Queensland excited with the prospects of all the great scenery, adventures and riding she’d be able to enjoy.

From the year she arrived in Australia, Camille started competing in endurance riding events across the nation.

She said so far she has ridden for 3967km in competition events.

“I placed in the top ten twice in the most prestigious endurance ride in Australia, the Tom Quilty Gold Cup, where I rode 160km in less than 24 hours.

While competing in events Camille moved on to take a horsemanship role at Anstead from 2009 through 2010 which was followed by further work training horses at Gympie from 2010-2013.

It was in 2013 while attending the Gympie Races that Camille discovered her other true passion; her husband-to-be cattleman David Bargenquast.

“I remember being at the races listening with great excitement as David spoke about all the big cattle properties he has worked on.

“I got very curious hearing him described what his work involved so I decided I wanted to see what this cattle mustering business was all about myself.”

Camille detailed their first date to the North Queensland Register with just a dash of sarcasm running through her delivery.

“It was very romantic; we installed fencing together. And his first Christmas present for me was a pair of fencing pliers.”

She said even with these grand romantic gestures, she still wasn’t giving up. Her resolve paid off when the pair became husband and wife in Townsville on August 22, 2014.

After they were married, David was asked by Richmond’s Rex and Penny McClymont to come and manage their cattle operation at Somerville.

“We’ve been there for five months now and we’ve loved every minute of it.

“I’ve been working on-property as a horse trainer there, specialising in colt starting.

“I’ve been very spoiled the property has great facilities and excellent round yards to train the horses in.”

It was just recently that Camille received the call that she’d been selected to be one of 40 of the top endurance riders from around the world to compete in the Mongol Derby.

“It was very exciting to receive the call; being asked to take part in the Derby is the dream of all competitive endurance riders.

With the event dated for August 1-14 next year, Camille is working on getting her endurance levels up to task by running 10km a week and doing as much riding as possible.

“You need to be extremely fit, as it’s a mentally and physically exhausting race.”

The Mongol Derby is an annual multi-horse equestrian endurance race than commenced in 2009.

The layout of the race is based on the postal route established by Genghis Khan in 1224, which was the world's first long distance postal system, based on a network of horse stations.  In 2010, the Mongol Derby achieved the Guinness World Record title of longest multi-horse race.

The Derby similarly incorporates 25 horse stations and rest stops along a length of 1000km through the Mongolian Steppe. During the course of the race, riders have the option to stay with local nomads or camp out.

In addition to enduring the distance of the trek, some of the challenges that will be faced by Camille and the other participants include: a high probability of injury associated with riding 25-27 different unfamiliar and "semi-wild" Mongol horses; travelling through remote and unmarked territory in a variety of landscapes; exposure to harsh elements and physical discomfort and exhaustion.

“It’s a big challenge and a great test of horsemanship skills.

“You’ve really got to be properly prepared; all track navigation is done by orienteering and we are not allowed to ride at night because it’s simply to dangerous.”

She said it will be an exciting time for her friends and family in Australia and France as well as each rider will be linked to a GPS tracker.

“They’ll all be able to follow where I am at any point during the race, and where I’m currently ranked.”

David has his reservations about his wife’s adventure but is also very proud of her.

“I’m a bit nervous about the idea and I’m concerned about the dangers involved, but it’s a once in a lifetime opportunity and I’m very excited for her to get the chance to chase her dream, it’s an incredible event.”

When the Register asked David what his advice to Camille was, he said in a very dry tone “don’t fall off”.

The main hurdle that Camille needs to clear before heading to Mongolia is to raise the funds necessary for her to take part in the race. And with entrance to the 2016 Derby costing close to $AU18,000 she is currently busy trying to organise sponsorship and raise the required money.

“It is a highly expensive event to take part in, but you have to take into account that includes paying for the 25-27 horses I’ll be riding; three days of training on-location before the race; the 150 herders who will help get me where I need to be; a custom built saddle designed to last me through the 1000km journey; vets to care for the horses and medics to keep me in one piece.”

“At least $1000 of the money I raise will be going to charity and the Mongolian community so it’s a worthwhile event for people to get behind.

“I have to pay my first installment by November 30, followed by three more payments in January, March and May, so I’m hoping people will support me in my quest.”

A fundraising cocktail party will be held for Camille on December 5 at the Richmond Shire Hall, which will feature a live auction, raffle and the Jason Clark Duo from Townsville performing live music.

In summing up her feeling about the trip Camille said it’s a hard decision to go over for the race.

“I felt bad about it at first, because so many people are doing it tough out here because of the drought.

“But I also think it’s good to remind people to keep their dreams alive through the bad times; and live those dreams when better times arrive.”

If you’d like to support Camille in her quest to take part in this epic adventure, and to purchase tickets for the cocktail party visit her Facebook page Camille-for-Mongol-Derby-2016 or email khamilia81@hotmail.fr to express your interest.