THERE is a mysterious odour wafting through the farms south of Chinchilla. 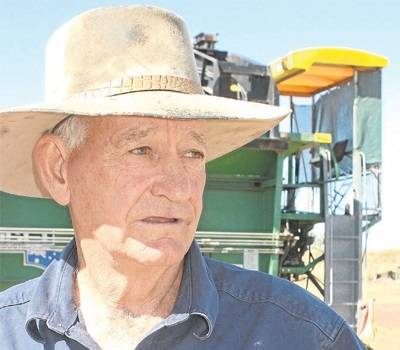 Landholder George Bender said he was concerned about the “burning” odour wafting through his farm.

THERE is a mysterious odour wafting through the farms south of Chinchilla.

Residents describe it as like “burning oil”. It is most often reported in the air during the night and early in the morning.

It is strong enough to wake some landholders from a deep sleep.

A few weeks ago, Linc Energy, whose underground coal gasification (UCG) pilot plant neighbours the complainants, sent a letter – which Queensland Country Life has sighted – offering to purchase a split-system air-conditioner (to the value of $7500) for some of the surrounding farmers’ houses.

That was, so long as the landholders are willing to sign a confidentiality agreement and not tell anyone about the matter.

The Department of Environment and Resource Management (DERM) first became aware of the odour complaints in February 2011 when Linc Energy advised that it had received two complaints in November 2010 regarding odour issues.

A spokesperson for DERM said the department has received three similar complaints – two in April and one in May.

Landholder George Bender has lived all his life on his family’s 700-hectare cotton, grain and livestock property, south of Chinchilla.

Last month, he received the letter from Linc offering to install an airconditioner at his house.

In the past five years, he has increasingly had to deal with the intrusion of mining companies at his property.

He turned down a coal seam gas company when they offered him $265 per year for three wells on his property, which they wanted to construct in the middle of his cultivation area.

He demanded another mining company donate $1000 to the local primary school and a church “as compensation” after his son discovered three of their vehicles taking a “short cut” and trespassing through his property.

A few years ago he crossed off the confidentiality clause in a contract requesting a seismic survey on his property.

The gas company accepted it. He has provided Queensland Country Life with all the paperwork to prove these instances.

The ‘odour’ incident is the first time he has had to deal with Linc Energy.

He lives about 6km from the Linc Energy pilot plant and spends most of his time outdoors.

But he is concerned. He said the fumes burn his eyes, with the pain remaining for two or three days, and he is also suffering respiratory problems.

He said he has complained to DERM four times in the past week about separate odour incidents.

Mr Bender has received the letter from Linc Energy, which the company calls an offer of “alternative arrangement”.

He was critical of the company’s plan to install air-conditioning systems, which he said might address the problem when farmers are indoors, but not when working outside.

He claims he is occasionally forced to wear a surgical mask while working.

While he has not yet taken Linc Energy up on their offer to install airconditioning, Mr Bender said he would refuse to sign any confidentiality agreement, claiming he could “not understand” why he should not be allowed to talk to his neighbours about the incident.

“The plant should be shut down if they cannot fix the problem – this should not be allowed to continue,” Mr Bender said.

Queensland Country Life has also spoken to other landholders, who did not want to be identified, but have confirmed the unknown odour and the “alternative arrangement” offer from Linc Energy.

Linc Energy’s Chinchilla site has often been cited as a successful case example by proponents of the UCG technology.

However, the latest news comes just a few weeks after the State Government announced the Cougar Energy UCG plant would not be allowed to reopen after the company failed to inform the government of water contamination fears last year.

In a statement to Queensland Country Life, Linc Energy managing director Peter Bond said the company was not to blame for the odour at Chinchilla.

He said weather and air-quality monitoring stations were placed on three identified properties where people had registered odour concerns under a 30-day program during June and July, with the study finding air quality to be “well within the air-quality guidelines which are designed to protect health and wellbeing”.

“The company has found on one or two previous occasions over the past 11 years, Linc has operated at that site.

Some landholders have mistakenly attributed other odours in the area to Linc Energy’s operations,” Mr Bond said.

Mr Bender said an air-monitoring station was not placed on his property.

A spokesperson for DERM said the department received a report from Linc Energy on Tuesday, which investigates the odour.

“DERM will thoroughly consider the investigation report submitted by Linc together with the information gathered during DERM’s monitoring before determining the most appropriate course of action,” the spokesperson said.

DERM said it was not aware of any adverse health effects from the odour.

Mr Bond said he was “personally” investigating whether there was any basis for some of the claims made by at least one landholder.