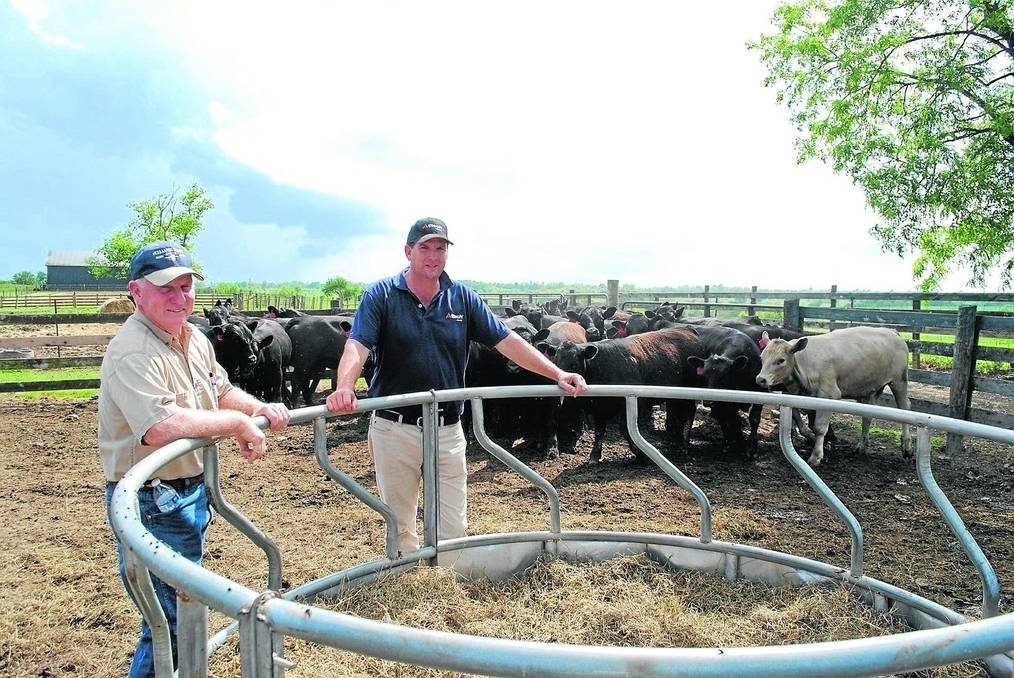 Kentucky cattle producer Charles Miller and Toby Doak from Alltech Australia with Angus steers that are expected to sell to a feedlot for about A$2300.

KENTUCKY beef producer Charles Miller is still very impressed that Australia could implement a national livestock identification scheme virtually overnight and get on with the job of safeguarding its global food supply industry.

More than 15 years later the US, by contrast, was still having the debate on whether or not a comprehensive trace-back system was required, the former head of the Kentucky Beef Producers Association said.

Mr Miller and his wife Judy opened their farm C&J Cattle Co near Nicholasville in central Kentucky to a group attending the animal health and science Alltech Rebelation conference in nearby Lexington.

"I would not like to think what would happen if we were to have another incident like BSE or any other serious disease outbreak," Mr Miller said.

"Yes, we can eventually work through the system and trace the origins of livestock.

"But there's no way it can be done in anything like 24 hours.

"We're still questioning if an identification scheme for cattle is an impingements on our rights."

"It seems to us US producers that Australia understood what was necessary and then when and did it.

"Australian producers I spoke to said they did not particularly enjoy the system one way or the other, but they just got on with it because it was necessary."

Mr Miller said it was inevitable that the US would eventually see the introduction of an identification system.

"But we have lacked the leadership to get the job done."

Mr Miller and his wife Judy run a backgrounding operation growing out steers for a feedlot in Wisconsin.

The predominantly Angus steers are bought weighing about 180kg live from about six auction centres located within Kentucky.

The A$1900/head steers are grown out on pasture and supplemented with fodder and mineral mixes in the winter months.

"A long time ago we decided we were beef producers, not cattle producers.

"It may not sound much, but we like to think we are delivering food to people, not cattle to other producers.

"For us, it changed out whole way of thinking.

"It's all about producing beef."

"It's terrific for the cow, calf producer but we're working on about $100/head profit."

All of the cattle receive a comprehensive health treatment on induction, including HGP implants.