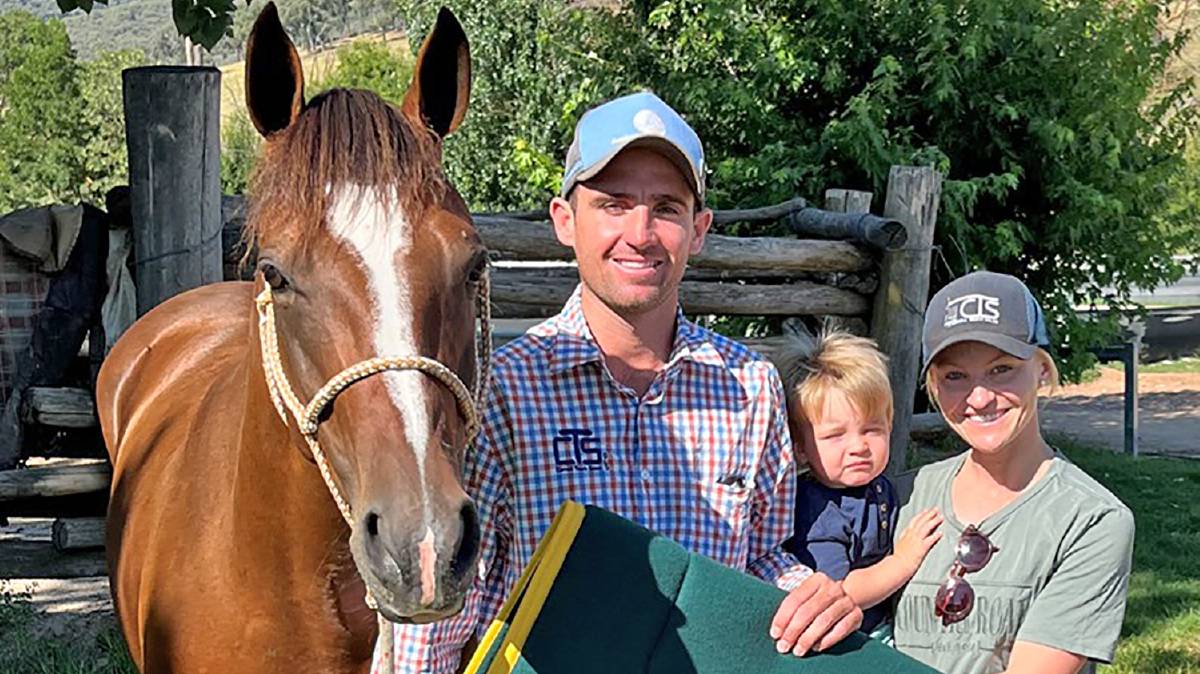 A Darling Downs buyer at the Berragoon annual sale has paid a record $102,000 for a mare.

A Darling Downs buyer has smashed records at the Berragoon annual production sale near Albury in NSW, paying $102,000 for a prized horse.

Competition started at $3000 and auctioneers took 48 bids before the hammer came down, prompting applause from the crowd at the Holbrook Equestrian Centre.

The Carrolls, who run Haluana Horses at Hodgson Vale, just south of Toowoomba, said Bells was worth every bit of the 2400km round trip.

"It's a breed we've always wanted. That mare's mother is probably the best horse I've ever seen and when I saw Bells, we just had to have her," Mr Carroll said.

The breeders had bought horses online from the annual sale before, but this was their first time holding a bid card.

They plan to enter the mare in polocrosse and camp drafting before the breeding season.

"She's only early in her career so we'll start to compete the mare this year and then we hope to breed from the mare every year as well - pull embryos out of her and breed some foals out of her," Mr Carroll said.

Queensland was well represented at the sale, with Peter O'Sullivan of Chinchilla the state's volume buyer, finishing with four horses for an average of $7188.

Other northern buyers included Grant Wells of Rolleston, Peter Knight of Thallon, Hugh Anderson of Morven, the Sturgess family of Chinchilla, Lindsey Doolan of Miles, Stephanie Griffiths of Surat, Trish Shepherd of Springside and the Waters family of Bell.

Interstate buyers came from nearby Victoria as well as from Western Australia and the Northern Territory.

The second top price mare Sailor Moon was offered by Berragoon ASH Stud, and was purchased by Woodlandshill Agriculture Company, Holbrook, for $62,000.

The top price gelding was Berragoon Skate offered by Matt Davison, Albury, and he sold to John Williams, Narrabri, for $32,000.

The top price colt, Billabillacoolah Quiz, was also offered by Matt Davison, selling to the Finlayson family, Stonebrook, Guyra, for $10,000.

Berragoon ASH Stud breeder Sara Grills said she was not expecting such a massive response to this year's catalogue.

"It was huge. We had no idea that that was going to happen at all. The top four lots pretty much doubled their reserves," Mrs Grills said.

"The highest price we've ever had before was $48,000 from last year and that was for an outside vendor horse, so it jumped enormously this year.

Mrs Grills said they were well supported by several states, especially those in which polocrosse was popular.

"Queensland was strong. They often are at our sale. We had 34 lots of our own in the sale and we sold to Darwin, New South Wales and Victoria. Being involved in polocrosse, they know the horses so well."

As to why the price spiked so dramatically, Mrs Grills said it was hard to say.

"We started an incentive, but Dalby was right up, so it just makes you wonder what the sale in Tamworth is going to be like.

"The horse market is sitting well, but it did surprise us because a lot of the money for the horses in Dalby was cattle money, which probably isn't the case with us. A lot of these horses went to polocrosse."