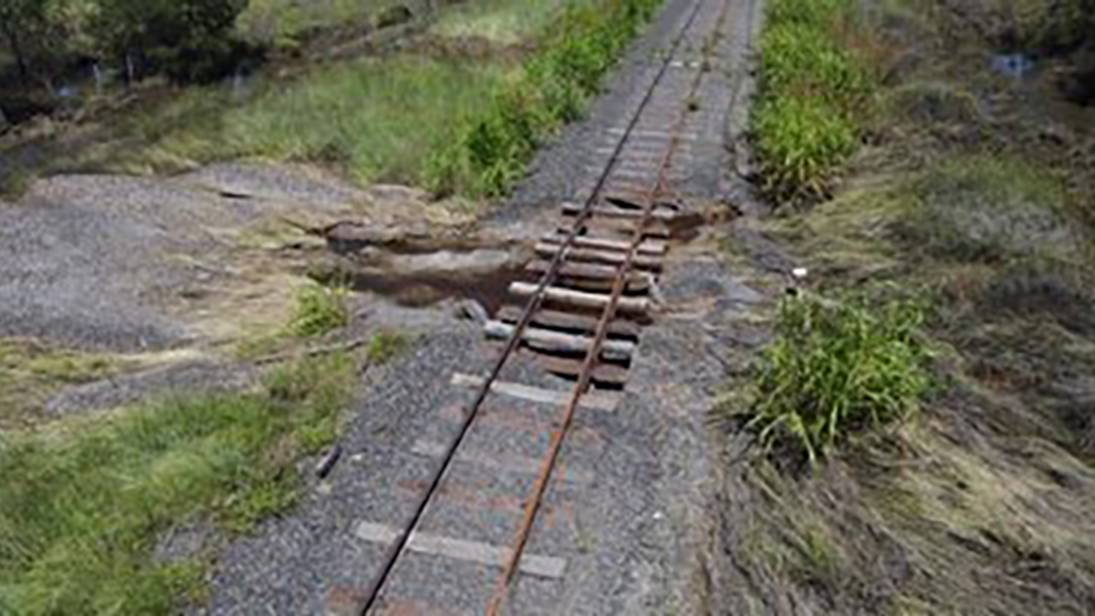 One of the partly washed away rail lines in southern Queensland. Picture supplied.

Queensland's south western train lines have all been repaired and reopened after heavy rain caused severe flooding that damaged tracks, forcing parts of the rail network to close for weeks.

Queensland's south western train lines have all been repaired and reopened after heavy rain caused severe flooding that damaged tracks, forcing parts of the rail network to close for weeks.

"When wild weather lashed the state late last year, there was some significant damage to the train lines including partly damaged or washed away tracks," Mr Bailey said.

"Thanks to the efforts of 75 workers, the western, West Moreton and south western lines have now reopened to passenger and freight services.

"More than 1140 tonnes of large rock and 2500 tonnes of ballast has been laid under the track, to restore vital rail infrastructure and enable services to operate safely.

"The large rock was used to help improve the flood resilience of the line in the event of large weather events."

Queensland Rail's Acting Head of Regional Wayne Prosser said the floods caused trees to fall onto tracks. Along with washouts and scouring, sections were closed at multiple locations including Rosewood to Toowoomba, Jondaryan to Miles and Wyreema to Warwick.

Goondiwindi to Thallon and Dalby to Meandarra were the final sections to reopen in January as crews had to wait for water to recede to inspect and repair the damage.

"The Goondiwindi region experienced the heaviest downpour with the section to Carrington suffering significant washouts hundreds of metres long and up to one metre deep," Mr Prosser said.

"The Meandarra branch closed mainly due to water overtopping bridges, including at Condamine where the river rose 1500mm above rail height and built-up debris caused alignment issues, which have now been fixed."

Mr Bailey said crews would be continuing with clean up works in the rail corridors over the next few weeks.

Flooding in the Wide Bay region over the weekend saw the North Coast line close temporarily, but it has now re-opened.

About 300 metres of track was in need of repair following the extreme rainfall.

According to Mr Bailey, 43 weather stations will be used by Queensland Rail to continue to monitor the state's rail systems.