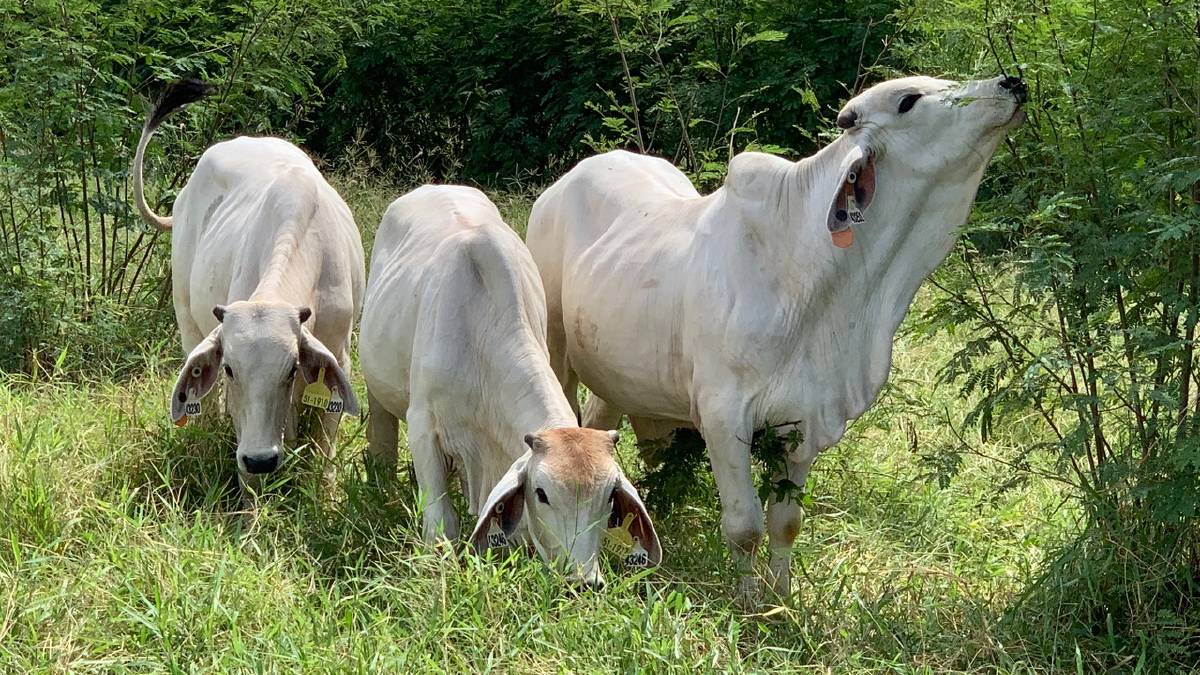 EAT UP: Northern cattle on the legume fodder crop leucaena, which both lifts weight gains and reduces methane emissions.

IT was called one of the most ambitious agriculture plans ever when it was launched four years ago but the chances the red meat industry will indeed be carbon neutral by 2030 are now very strong.

The milestones ahead on the numerous pathways mapped out to get to that bold goal seem more than feasible and are already placing Australian beef and sheep meat in the box seat to take advantage of future markets for climate-friendly food.

This was the picture painted by Meat & Livestock Australia's program manager for sustainability innovation, Doug McNicholl, at the organisation's annual conference series, held virtually this year.

"We are placing multiple bets to produce a cumulative outcome," he said.

MLA set in motion the initiative, known as CN30, at its annual general meeting in Alice Springs in 2017.

It was founded on a report by CSIRO which found it was indeed possible that by 2030 Australian beef lamb and goat production, along with the lotfeeding and processing sectors, could be making no net release of greenhouse gas emissions into the atmosphere.

Since then the investment in science and research to deliver methane emission reduction technologies has run at full steam. So too the adoption of carbon storage management on-farm and the investment in people to foster the know-how of operating in climate science alongside red meat value chains. And work enabling measurement, reporting and verification, so that this trailblazing work can be communicated and monitored over time, has been extensive. By 2023, technologies like feed supplements to reduce methane emissions will be on the market, Mr McNicholl reported.

2025 is expected to see large-scale uptake of savannah fire management in northern Australia.

"Our insights are that up to 40m hectares will be under these methods, creating in excess of 10m additional carbon credits per year for the sector," Mr McNicholl said.

By 2030, as much as 25m hectares of new tropical legume plantings will be established by producers.

Supplements which both decrease enteric methane by up to 90pc and increase liveweight gains by 10pc will be used in the majority of feedlots.

And producers using vegetation management methods will be mainstream, with up to 10m hectares, the majority in southern Australia, under revegetation.

The work done had been in identifying opportunities to generate and capture value for producers through environmental services, alongside red meat production - not in place of it, Mr McNicholl said.

There is capacity for future productivity growth while meeting global temperature targets.

"Because of geological, topographic and climatic factors, less than 8pc of Australia's land is suitable for crop production.

"For the most part we have a hot and dry landscape. By design, ruminants eat and convert plants that grow in areas where crops can not into protein for human consumption.

"That's why 355m hectares, or around half of Australia's landmass or 90pc of agricultural land, is used for grazing livestock.

"We also know that brands require certification for consumer buy-in. Consumers are less concerned about how an outcome is achieved - more that the attribute on a packet has been suitably assessed.

"Our insights are where we are providing a new service alongside red meat production there is an underlying trend towards that being valued in the community."

The challenge for brands, therefore, is to capture the benefit provided and market it to consumers who are willing to reward for it, Mr McNicholl said.

There are already examples of that happening.

The extent to which the rewards flow back to the producer is a supply chain arrangement that is under development at the moment, Mr McNicholl said.