"Fantastic sight", "massive relief" and "all systems go" are the words South Burnett producers are using to express the sheer joy being felt at the sight of the region's big storage dams full to the brim and overflowing.

"Fantastic sight", "massive relief" and "all systems go" are the words South Burnett producers are using to express the sheer joy being felt at the sight of the region's big storage dams full to the brim and overflowing, thanks to last week's rain in southern Queensland.

At noon on Tuesday, the Bjelke-Petersen Dam at Moffatdale was 95.65 per cent full, giving users access to just over 129,000ML of water.

Further west, Boondooma Dam was at 100.7pc capacity and spilling over, meaning there is 204,200ML of water in the system for horticultural and livestock needs there.

"It's a massive relief for us," Boyne River Irrigator Advisory Committee chairman Ken Darrow said. "With Boondooma full, the drought is over for us."

Under the system in place following the dam's construction, users have been cut off when the water level gets below 70,000ML, meaning they've had no access to water for the last two years.

"Last year and the year before have been completely disastrous for us," Mr Darrow said.

"One type of irrigator floodlifts water into big storage dams, and cattle producers irrigate crops to turn off steers - we estimate not being able to do the latter meant $1m a month being lost from the local economy.

"Now, Sunwater says we have our full allocation so it's all systems go again."

Another person who is equally happy even though he will have to wait longer to reap the benefits of plenty of water is Brett Heading, co-owner of Clovely Estate, Barambah Station, Burnett Valley Olives and Burnett Valley Vineyards.

"We live and breathe by water from Bjelke-Petersen Dam and there's been bugger all the last few years," he said. "Vines need a lot of water."

Mr Heading said the run of water had come a little late for the fruit already set in their vineyard and olive groves but it had given them water security for the next two years, meaning they could irrigate right through to harvest.

"We've had very miserable crops the last few years - 300 tonnes of fruit from our grapes - and this won't change a lot this year, but the full dam is fantastic," he said.

They expect to also benefit from greater cellar door visitation as more people visit the dam for boating, camping and water skiing weekends, which will coincide with their tourism and hospitality expansion plans. 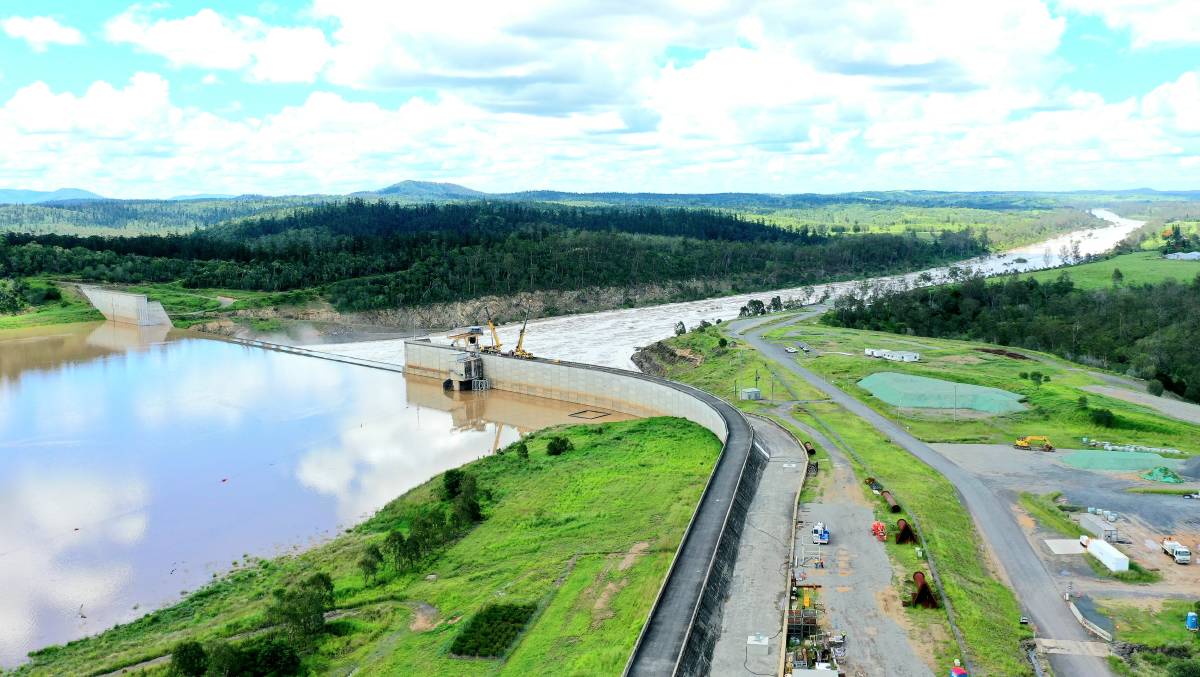 Around 20,000ML a day from the flooded Burnett River has been steadily overflowing the lowered Paradise Dam wall.

South Burnett councillor Kathy Duff said the water level in Bjelke-Petersen Dam had been down to 6pc prior to the rain, concerning everyone greatly.

As well as primary production, it supplies water to the towns of Murgon and Wondai.

The township of Kingaroy relies on water from Boondooma Dam, which was down to 20pc, as does the Tarong power station and Swickers bacon factory, which employs hundreds of staff.

"We're an agricultural region - we rely so much on water, and this will make so much difference," she said.

In other parts of the state the Burnett River has been overflowing the lowered Paradise Dam wall since November 14, while Glenlyon Dam east of Texas is also spilling over.

In the MacIntyre Brook system, Coolmunda Dam has been above 100pc capacity since November 11, and at St George the EJ Beardmore quickly rose to 100pc on November 16 and has been at that level ever since.

The Upper Burnett's Wuruma Dam is 66.7pc full, thanks to inflows since the beginning of December.

In the Upper Condamine the Leslie Dam is 100pc full.

Unfortunately, we have had to turn off comments for legal reasons. To have your say, send in a letter to the editor.