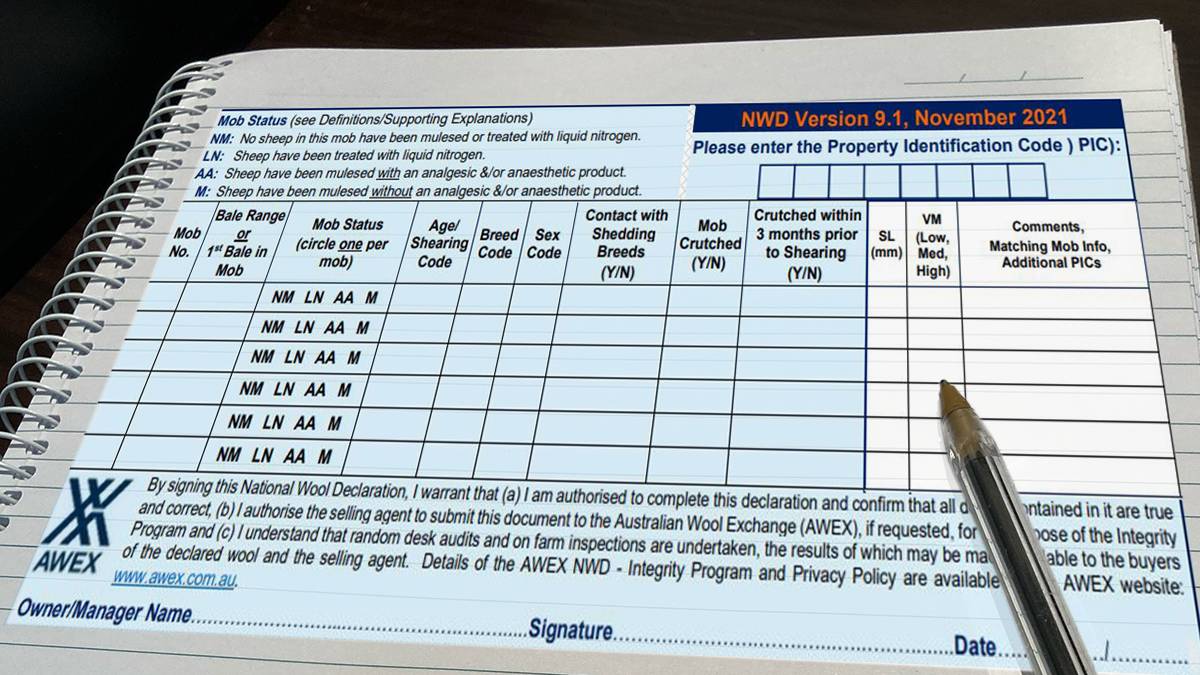 Changes to the National Wool Declaration include the streamlining of the liquid nitrogen category and the removal of the ceased mulesing option. DIGITALLY ALTERED IMAGE.

The managing director of a major wool broker has criticised recently announced changes to the National Wool Declaration.

The managing director of a major wool broker has criticised recently announced changes to the National Wool Declaration, saying it "watered down" efforts of producers who had stopped mulesing but may still have some mulesed sheep in their mob.

But other members of the industry believe the simplification of the document is a good thing for both wool growers and buyers.

The latest update from the Australian Wool Exchange to the NWD will see the ceased mulesing or CM option dropped from April, while the treatment of sheep with liquid nitrogen will be pared back into a single identification code, as opposed to separate codes specifying whether pain relief had been used or not.

The update will override a previous update to the NWD announced in July.

At that time AWEX had flagged the possible removal of ceased mulesing status within two years.

Fox & Lillie Rural managing director Jonathan Lillie said producers that could have previously sold wool through accreditation schemes which specify that mulesing is no longer used by the grower would no longer have that option through the altered NWD.

"I think the big thing for us is that for our growers that have done that hard work, done the breeding and been able to make the change, it sort of waters down their efforts," he said.

"I think the intention with ceased mulesing was the market would act pretty quickly to take up non-mulesing, but as we know that hasn't been the case.

"Because CM will not be allowed in many cases into NM (non-mulesed) orders now, it's going to reduce the amount of wool on the market.

"It could cause a shortage out of Australia of NM wool having the effect of pushing the price premium up further.

Mr Lillie said the fact that the liquid nitrogen had no option to identify the use of pain relief was also something that he found strange.

"If liquid nitrogen doesn't need a stipulation, why would mulesing?" he said.

"It's completely incongruous because we know for a fact that liquid nitrogen causes serious pain, yet they've decided to omit it."

Australian Wool Growers Association director Paul Cocking said he was happy to put trust in AWEX and the changes they had made.

"I think it's important that we increase the participation rate and reduce the error rate and having some more clarity around the NWD to make it simpler is a good thing moving forward," he said.

WoolProducers Australia have also voiced their support for the updates.

AWEX CEO Mark Grave said bringing the timeline forward for that, as well as the changes to the liquid nitrogen category, came in response to industry concerns regarding the complexity of the document causing confusion and a greater margin of error.

"We've deferred the implementation date [to get rid of CM] to April 19, during the Easter recess so there's an extension in time there to make sure there's enough communication," he said.

"It wasn't rushed but is certainly coming in as soon as practicable."

From the 2010 season to the 2020 season, the declaration rate using the NWD has increased from 42 per cent to 76pc, while declarations of NM have increased threefold from 5pc to 15pc.