Western Queensland is expected to see three times their November average rainfall in the coming days. 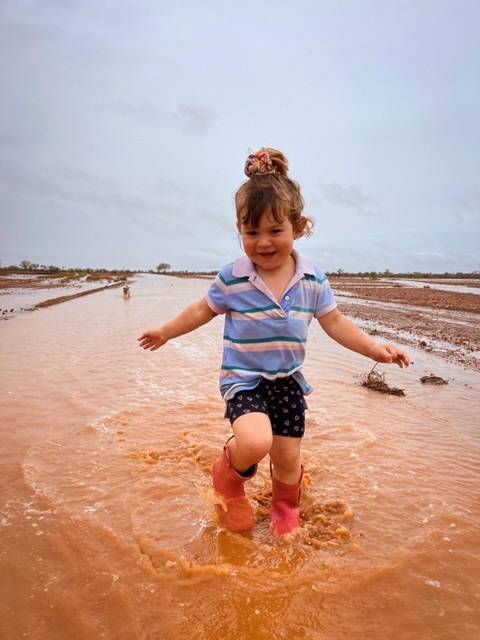 Brydie Hahn, 3, and dog Sally play in the puddles after 35mm of rain fell this week at Burkobulla Station north of Eromanga. Photo: Heather Hahn

Western Queensland is expected to see three times their November average rainfall in the coming days.

The widespread deluge has brought much relief to drought-stricken graziers, as the Bureau of Meteorology forecast heavy rain and thunderstorms for the rest of the week.

A moderate flood warning is in place for Texas and the Goondiwindi region is on alert for possible flash flooding and heavy rain for Thursday night and into Friday morning.

Major flooding has occurred along the Dumaresq river in the Darling Downs region, following rainfall totals of 60-90 millimetres overnight.

Further heavy rainfall is expected during Thursday and into Friday with a flood watch for parts of southern Queensland, including the Macintyre and Weir catchments.

The BoM warned that minor flooding was likely at Roma early on Thursday evening, and at Dalby late the same night.

Heavy rain had fallen in north western parts of the Myall Creek catchment overnight Wednesday, and there were further falls of between 20 and 50mm since 9am on Thursday.

Bungil Creek at Roma was at 4.73 metres and rising, and was likely to exceed te minor flood level (5.00 m) early on Thursday evening, with further rises possible with forecast rainfall. 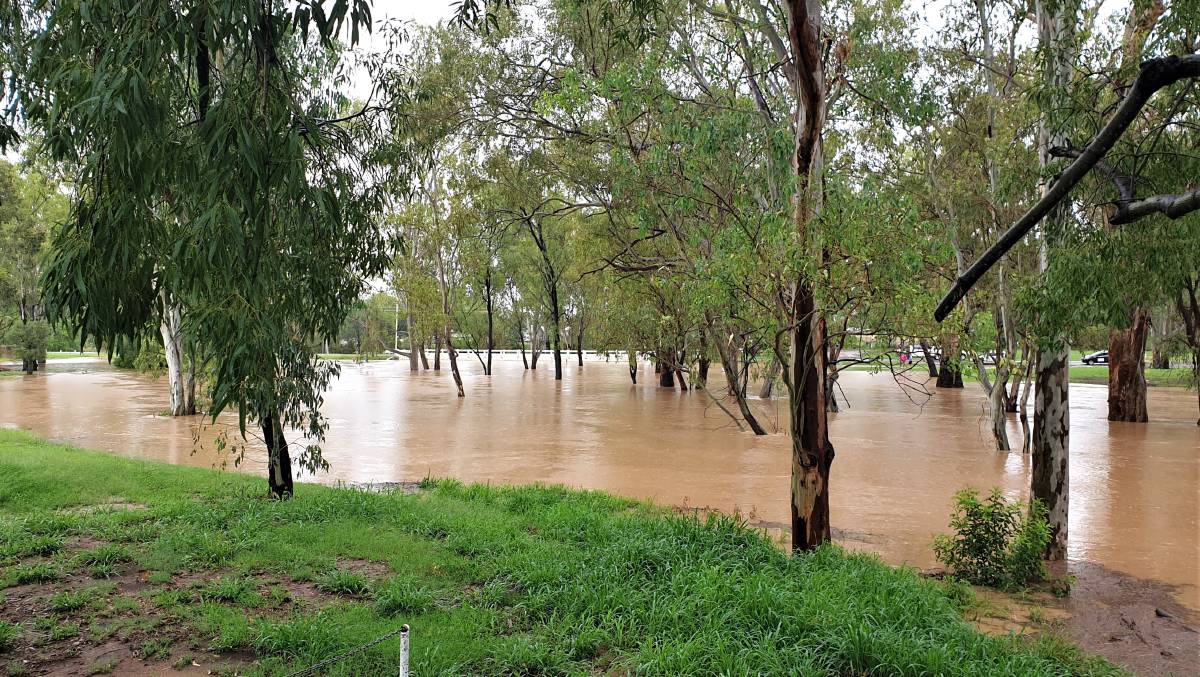 The minor flood in Bungil Creek was attracting a lot of interest from Roma locals on Thursday afternoon. Photo: Sally Gall

A spokesperson for BOM said people in southern Queensland, particularly in communities close to the New South Wales border such as Goondiwindi, should prepare for possible flooding now.

"Intense rainfall is possible and could cause river flooding which could last well into next week as flood peaks move downstream," the spokesperson said.

"Dangerous flash flooding is a key risk for today and tomorrow and has already been observed in areas of southern Queensland.

"As it is in harvest season in southern Queensland, we know these conditions will pose some difficulties to many farmers."

"The latest BoM forecasts have reduced the amount of rain previously predicted, with some chance of isolated storms delivering heavy falls. This may result in some road closures and residents should continue to monitor road conditions," Cr Springborg said.

"We never know how much rain we will get, and where, until it is in the gauge. It's therefore important that we are cautious, remain prepared and be safe." 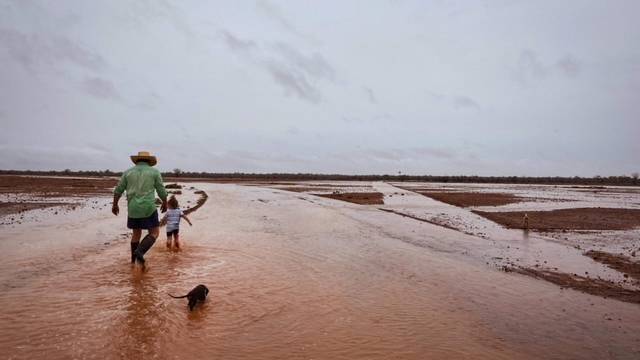 Daman Hahn with his daughter Brydie, check the paddocks after a deluge of rain dropped on their property at Burkobulla Station on Thursday. Picture: Heather Hahn

Following years of severe drought and below average rainfall, the Hahns received 30 millimetres of rain this week, bringing much relief to their paddocks and their on-property water storages.

Heather said the rain couldn't have arrived at a better time.

"We had 5mm end of last week and have just had 25mm early this morning till about mid morning," Ms Hahn said.

"The rain has dried off a lot in the last couple of months but last month we've had some regular showers which has been nice.

"We'll be good if we can keep getting regular follow up rain. It's been nice because in previous summers we've headed into dry periods, but this year we're heading into summer with a bit of a head start."

The Maranoa region has copped a battering from several severe thunderstorms in the last 24 hours, with homes in Roma seeing power outages and some suffering structural damage.

Fire and rescue were called to one home on the outskirts of town as a section of the roof was ripped off in a "tornado-like" storm, and multiple power poles outside the property were snapped in half.

There were also several road closures around the region, including the Carnarvon Highway between Roma and Injune.

Ashburn Road is currently closed due to the Eastern Diversion Channel running in Roma.

Maranoa Regional Council and the Local Disaster Management Group met this morning to assess the damage and are monitoring conditions and storm activity closely, as more rain and potential localised flooding is predicted.

The storms did, however, bring welcome rain to graziers in the area, such as Yarrawonga Cattle Co, who recorded 163mm at parts of their Wallumbilla property this morning.

Owner Andrew Bassingthwaite said that the heavy falls couldn't have come at a better time.

"It's just incredible, we just needed it so badly," he said.

Despite the kids being stuck at home, unable to get to school due to flooded creek crossings, Mr Bassingthwaite said the rain had put everyone in good spirits.

"We had our irrigation down at Dulacca West that was nearly empty and we're overflowing now so it's going to set us up for another couple years down the track.

"And we were sort of missing it at Stockhaven and it all of a sudden happened in three different falls."

A lady at Augathella reported on the Higgins Storm Chasing Facebook page that she had recorded an incredible 38mm in 10 minutes yesterday.

Applethorpe had its wettest day this year, recording 86mm overnight.

Sponsored by
An unknown market for dressed goat carcasses at kangaroo chiller boxes has been exposed in the Maranoa.
Test
Four hundred people have petitioned the Queensland government to raise the level of the bridge crossing the Paroo River west of Eulo.
Test
The Regional Banking Taskforce has revealed the state of the industry in regional areas.
Test
A total of 4133 head of cattle were consigned at Roma's store sale on Tuesday.
Test
Damien Scanlan sources 11 rams from a shedding sheep stud to inject some worm resistance into his Dorper flock
Test
Burnett Livestock & Realty's Biggenden meatworks and store sale on Monday saw a yarding of 1226 head.
Test
A new north west Queensland weather radar has turned online, in time for the upcoming La Nina wet season.
Test
A total of 664 head were yarded at Murgon Saleyard's Store and Fat Sale on Tuesday.
Test